History Channel Manson Speaks: Inside the Mind of a Madman.

Here are the links to the recent History Channel Manson related program Manson Speaks: Inside the Mind of a Madman.  The show will likely repeat a few times here in the US but for those outside the US it might not be available for a while. 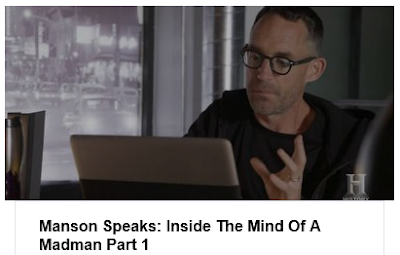 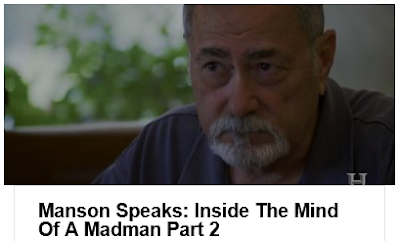 
The show focuses on unsolved murders that have been loosely connected to the Family by Bugliosi, other authors and Manson pundits.  The main unsolved murder discussed is that of Reet Jurvetson who was known as Jane Doe 59 for over 45 years until a DNA match finally identified her.

The suicide of John Haught is also discussed.  The surprise to this discussion is that Mark Ross was located and interviewed.  I found his participation in the project the most interesting, particularly because he was so evasive.  The show speculated that the reason Mark Ross changed his name to Aesop Aquarian was that he was hiding from the Family because he feared them.

I think there was another reason.  In the early 70s a new commune sprouted up in Los Angeles headed by Father Yod and went by the name The Source Family .  Since many of the members changed their names to things like Electric Aquarian and Isis Aquarian, it's far more likely that Mark Ross changed his name to Aesop Aquarian because he joined this commune.  Which left me wondering if Mark isn't somewhat like Brooks Poston who needed a blueprint of someone else's making to conduct their life.

My sincerest condolences to Simon Wells whose excellent investigation into the death of Joel Pugh was taken completely out of context by the show.  They couldn't have placed Simon's work in a worse light.

Joan Huntington, Laurence Merrick's wife, was interviewed.  It looked like she had a great album full of pictures of the Family.

The show shanghaied Clem and got him to speak.  There is no video, only audio of this encounter but we here at the blog can confirm the encounter took place outside of the restaurant where we saw him on our last tour.

I was in the program for what can only be described as a cameo appearance.  The lighting on me was terrible and I don't want to talk about it!

All in all the show departed from the same old, same old of previous productions but fell short of believability regarding the unsolved murders.  The masses who are not into the details of the case like we are will probably find it to be a great show.