There have been a few documents in the current cache I obtained that are a bit of a mystery to me. Two of those documents are related to Wayne Robert Peterson. One is an arrest report and the other a rap sheet.

The arrest report states that Peterson's birthdate is January 6, 1947 and he was born in Oakclair, Wisconsin. He was born in Eau Claire, WI, actually. The arrest was for the sale of dangerous drugs and it appears he was arrested on a warrant though there isn’t an arrest location. He lived at 338 Windward in Venice CA.

Peterson had a previous arrest for drugs. I could not find any newspaper articles about either of the arrests. The rap sheet is dated June 23, 1969 so there are not any other crimes he was arrested for after that date on the sheet.

Peterson passed away in Wisconsin on July 14, 2021. His obituary page has a motorcycle at the top of the page and the text reveals that he loved to ride motorcycles. I ran a background check on him, he had a number of arrests between 1987 and 2013 for disorderly conduct, domestic abuse and bail jumping in Wisconsin.

Given that information and realizing that I’m stereotyping, I’m thinking that Peterson may have been with the Straight Satans but after asking around to the few people I’m in contact with who might know the names of the Straight Satans members, I struck out. He could have had a nickname and not many were familiar with his true name.

I ran across an interesting detail in the article below regarding the timeline of when law enforcement finally put everything together and realized that the Hinman, Tate and LaBianca murders were all committed by the same people.

On November 12, 1969 Venice police interviewed a man who had been arrested for burglary who might have some info on the suspects in the TLB cases. This informant gave them the name of Danny De Carlo as a person who was known to frequent Spahn Ranch. Danny spilled his guts.

I am wondering if Peterson was the person who gave Venice Police De Carlo’s name??? I don't think that the Peterson documents were with all the other documents by mistake, there's a reason why they were there.

If anyone knows Peterson's role in the Manson saga, please share it with the class. 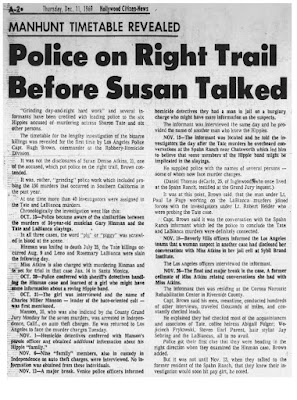 "Grinding day and night work" and several informants have been credited with leading police to the six Hippies accused of murdering actress Sharon Tate and six other persons.

The timetable for the lengthy investigation of the bizarre killings was revealed for the first time by Los Angeles Police Capt. Hugh Brown, commander of the Robbery-Homicide Division.

It was not the disclosures of Susan Denice Atkins, 21, one of the accused, which put police on the right trail, Brown contended.

It was, rather, "grinding" police work which included probing 150 murders that occurred in southern California in the past year.

At one time more than 40 investigators were assigned to the Tate and LaBianca murders.

OCT. 15- Police became aware of the similarities between the murders of 34-year-old musician Gary Hinman and the Tate and LaBianca slayings.

In all three cases the word "pig" or "piggy" was scrawled in blood at the scene.

Hinman was knifed to death July 25, the Tate killings occurred Aug. 9 and Leno and Rosemary LaBianca were slain the following day.

Miss Atkins is also charged with murdering Hinman and is set for trial in that case Jan. 14 in Santa Monica.

OCT. 20- Police conferred with sheriff's detectives handling the Hinman case and learned of a girl who might have some information about a roving Hippie band.

OCT. 31- The girl was interviewed and the name of Charles Miller Manson- leader of the hate- oriented cult- was first mentioned.

Manson, 35, who was also indicted by the County Grand Jury Monday for the seven murders, was arrested in Independence, Calif. on auto theft charges. He was returned to Los Angeles to face murder charges on Tuesday.

NOV. 6- Nine "family" members also in custody in Independence on auto theft charges were interviewed. No information was obtained from these individuals.

NOV.12- A major break. Venice police officers informed homicide detectives they had a man in jail on a burglary charge who might have more information on the suspects.

The informant was interviewed the same day and he provided the name of another man who knew the Hippies.

NOV.13- The informant was located and he told investigators the day after the Tate murders he overheard conversations at Spahn Ranch near Chatsworth which led him to believe that some members of the Hippie band might be implicated in the slayings.

He supplied police with the names of several persons- some of whom now face murder charges.

(Daniel Thomas deCarlo, 25, of Inglewood, who once lived at the Spahn Ranch, testified at the Grand Jury inquest.)

It was at this point, Brown said that the man under Lt. Paul Le Page working on the La Bianca murders joined forces with investigators under Lt. Robert Helder who were probing the Tate case.

Capt. Brown said it was the conversation with the Spahn Ranch informant which led police to conclude that the Tate and LaBianca murders were definitely connected.

NOV.18- Beverly Hills officers informed the Los Angeles teams that a woman suspect in another case had disclosed her conversation with Miss Atkins in her jail cell at Sybil Brand Institute.

Nov. 26- The final and major break in the case. A former cellmate of Miss Atkins related conversations she had with Miss Atkins.

The informant was then residing at the Corona Narcotic Rehabilitation Center in Riverside County.

He explained they had checked most of the acquaintances and associates of Tate, coffee heiress Abigail Folger; Wojiciech Frykowski, Steven Earl Parent, hair stylist Jay Sebring and the LaBiancas, all to no avail.

Police said they got their first clue they were heading in the right direction when they examined the Hinman case, Brown added.

But it was not until Nov. 13 when they talked to the former resident of the Spahn Ranch, that they knew their investigation would soon hit pay dirt, he noted. 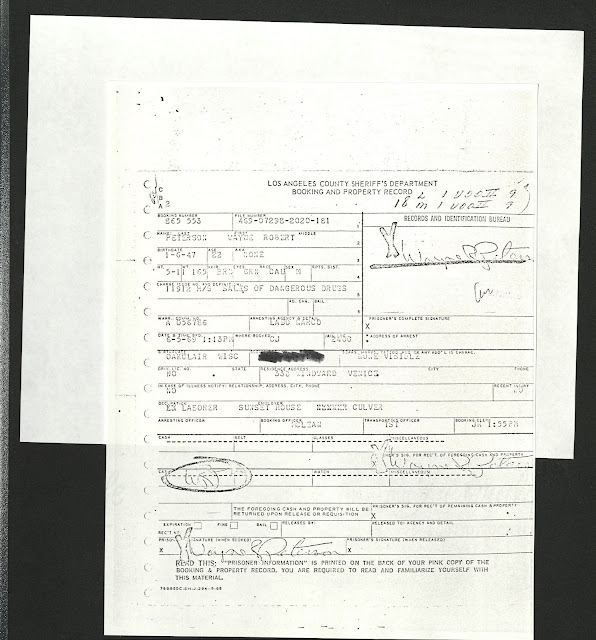 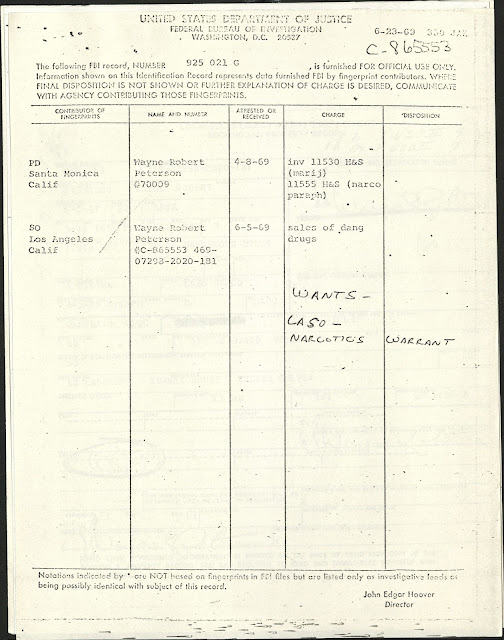