Ghislaine Maxwell might fill America's head boogeyman position for the remainder of her life if she's found guilty of the charges against her. Week two of her trial begins today. No cameras are allowed inside the courtroom. 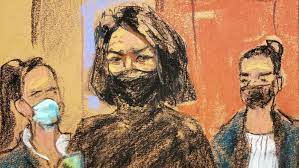 Ghislaine was raised Anglican. I'm unsure of where she lands on the whole God thing these days but prayer might not be a bad idea for anyone who finds their name dropped alongside Charles Manson's in newspaper articles. Divine intervention could be your only hope. 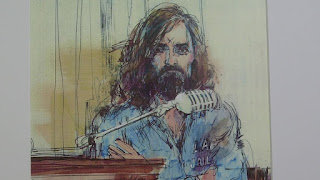 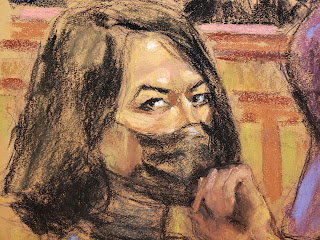 Charlie's gone, Ghislaine is awful, and we need a criminal we're unable to generate empathy for to taunt once her mind is fully broken. Grab your colored pencils and draw us a monster in a covid mask and please do not dawdle. I'll start the air popper. Extra salt and butter you know it. Btw is that Rusty Burrell from The People's Court? 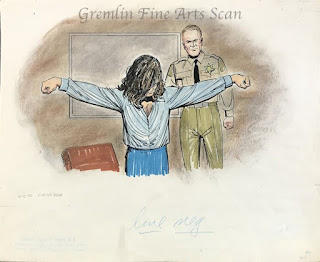 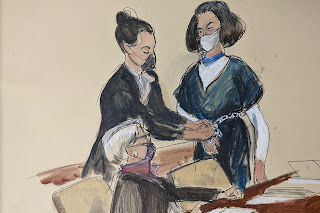 Abandon all hope ye who enter here. Not even Tricky Dicks can save you when you're inside the media machine. 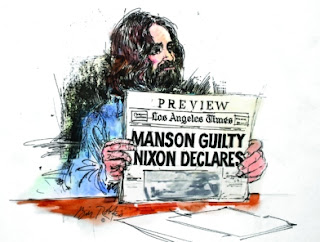 While combing through famous courtroom sketches, I noticed they draw your face a certain way when you play for the opposing team. 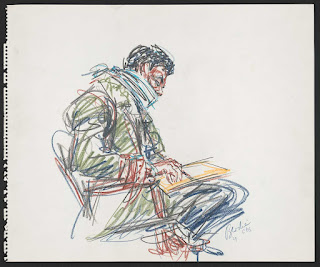 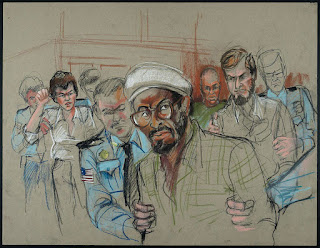 Jeffrey looks so happy by the jet. He never read his Ecclesiastes and it shows. 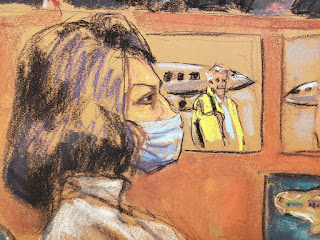 Ghislaine would be in some other blog post starring as Little Paul right now if the Clyde to her Bonnie hadn't been found bruised and lifeless inside his locked cell within a supposedly secure facility. But things worked out the way they did and now Ghislaine earns dual paychecks playing brainwashed Squeaky and maniac mastermind Charlie in the same movie. What a trip. 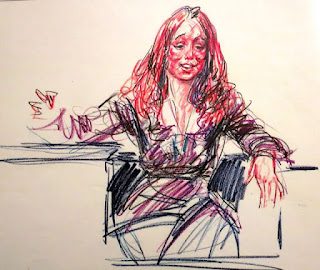 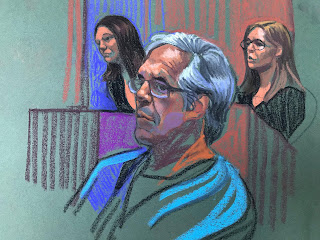 The artist didn't make Epstein look as evil and unhinged as the other defendants but Epstein also did not spend a comparable amount of time in court. I know he stormed out of a deposition when opposing lawyers repeatedly asked about the shape of his penis but I can't find any records of Epstein acting out in front of a judge. To some extent, everyone else we're discussing in this post did. 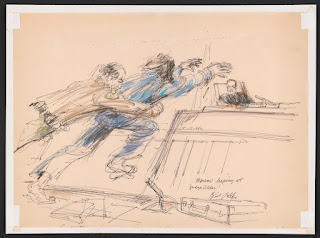 Acting out in court is ALWAYS a poor decision no matter who you are and what you did or did not do. Go ask Lulu and Katie if you're unsure. When they don't respond, consider querying Charlie's haunted tv.

Threats. "I see you. We see you and know where you are." 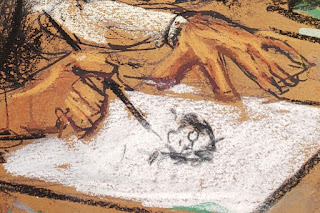 Hands are tricky to draw. Ghislaine has some sort of Peanuts/Tim Burton/Courage the Cowardly Dog thing going on there I'm not sure. She didn't even make a circle for the head first.

One of the illustrators Ghislaine sketched has forty years on the job. The Post didn't mention that because they needed to fill space. Ghislaine is at the precipice and it's a long way down. "Your honor, she enslaved the young and threatens the old from within the sanctity of our hallowed courtrooms."

I'd be lying if I said there wasn't a little part of me that wonders if Ghislaine will receive a light sentence even though she's Squeaky and Charlie rolled into one. I saw Ghislaine's comments hundreds of times on reddit when I didn't know she was behind her username and even occasionally interacted via alt accounts due to her inflammatory views on certain subjects. Whenever I think back on those days, I'm kinda shook. Who else have I talked to? 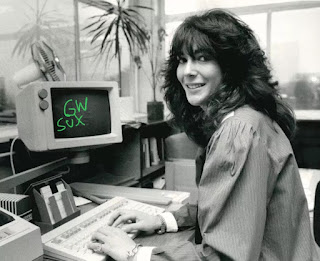 Keep in mind that is Ghislaine is rich and rich people always win unless the other rich people abandon them a la Madoff. But Bernie stole their money. Ghislaine merely provided the entertainment.

If she was a piece of white trash from down here on the river there would be no questions regarding her fate. Ghislaine faces a maximum of eighty years and turns sixty in nineteen days. How much more time do you think she'll do? 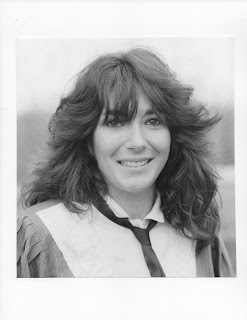 Finally, Patty told me last week that longtime blog troll, Susan Atkins Gonorrhea, passed in early October after a brief illness. He was forty-nine years old. SAG's comments always started out okay before he predictably lost control and went off the rails. I always wondered why he had to take that route.

Serious talk. Don't die a troll. It's no legacy.+ggw