It Was Not the Wrench 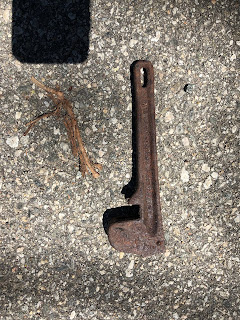 While on the 2018 Manson Blog Tour we encountered part of a rusty old wrench that was discovered with some partial human remains at the site where Steve 'Clem' Grogan buried Shorty Shea. The question: could this have been the actual wrench used by Grogan that initiated the murder of Shorty Shea?

We were able to identify the following inscriptions on the wrench:

The last of the three inscriptions turned out to be the key to solving the mystery.
_____

“Also in the 1970s, trade with mainland China began to resume. There had been extensive trade with China from colonial times. Early chinese imports are unmarked or marked with chinese characters. From 1891 until 1949 their production was marked "made in China." but, because of domestic instability in China (the Boxer Rebellion, the Republican Revolution, regional Warlords, Civil War, Japanese aggression, etc.), there was relatively little trade with that country during that period. From 1949 to the mid 1970s there were no trade relations with mainland China. The island of Taiwan, however, became a major source for gee-gaws during the 1960s until it also moved on to pricier electronic items. Taiwanese production from this era is marked "made in Republic of China" or "made in China (R.O.C.)" to distinguish from "Red" China. In the mid 70s, trade gradually resumed with the mainland and their production is marked "Made in the People's Republic of China." In 1978, the United States fully normalized relations with mainland China and their production again became "made in China" while R.O.C. production came to be labeled "made in Taiwan."”

Shorty Shea was murdered in August of 1969. If the wrench had been imported before 1978 it would bear one of these inscriptions: "made in Republic of China" or "made in China (R.O.C.)".

It did not, instead the inscription said "Taiwan". Based upon the website above that means it was imported no earlier than 1978.