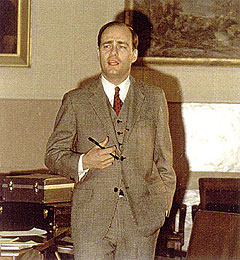 It seems that in Los Angeles you can't even escape the "LAPD SCANDAL" long enough to have a quiet dinner and take in a movie. We're up to victim's blood splattering on police station walls and carpets, so God, What's next?

This entire event is unfolding just like the Manson Case did 30 years ago. The only difference is murder is now spelled phonetically S C A N D A L.

That police brutality is news to only one black man in these United States (the Chief of police) speaks dramatically to the question of cover up and or conspiracy. And that the mayor and members of the LA City Council would undoubtedly refuse to take polygraph tests only raises more suspicion of complicity.

If you are watching the sinful crumbling of the once great city named Los Angeles, you can see that the standard setup for the little guy to take the fall is already in progress.

But if you, like us, wish to see the actual responsible parties take their due, perhaps you would agree that there is only ONE solution. This is to take the 9 million dollars Bernie Fife wants to con L.A. out of and give it to, none other than, Vincent Bugliosi. Appoint Mr. Bugliosi as Special Prosecutor, just like the famed Kenneth Starr was.

Please understand, we do not endorse or recommend Mr. Bugliosi, as a particular person, nor are we affiliated with him in any way, but we acknowledge that he is quite possibly the ONLY man alive qualified to get the necessary complicity convictions of the higher ups. He has proven, beyond the shadow of a doubt, that he can accomplish such a feat as evidenced by his record in the Mason Case.

The parallels between the "Manson Case" and the "LAPD Scandal", what with idiots doing the bidding of their leaders are almost exacting and trust us on this one, ONLY a Bugliosi will bet justified conspiracy convictions. It's time we all stop accepting the practice of letting the little guy take the fall.

As for all the deranged cops that have gotten off for so long on the LAPD time honored exercise of Nazi-bation, we suspect most of those little cowards will run and hide at just the thought of Mr. "B" riding into town. And those that don't run will surely prove just how mentally defective they really are.

If you wish to comment on the above opinion, tell us your thoughts and if you are about to be a fall guy, tell us what you know and we'll publish it, only if you so request.


Hendrickson: "Because Mr "B" has claimed that HE ONLY uses an old typewriter and does NOT even own a computer, this may be the ONLY email of its kind."

Whoever you are, you are obviously a conspiracy theorist and an idiot. Your "pigeon English" and failure to construct a logical line of reasoning clearly indicates that you have no credibility - or education, for that matter - and should simply be ignored. Your disjointed ranting goes nowhere and would undoubtedly fail to go any further even if you had the slightest grasp of proper grammar, punctuation, and/or spelling.

Nevertheless, here's where your reasoning is flawed. First, polygraph tests are so unreliable that they are barred from being introduced into evidence in a court of law. Yet, you want to hold them - or someone's unwillingness to submit to them - up as proof positive evidence. This makes no more sense than O.J. Simpson's defense. It's nothing more than a bunch of garbage without any foundation in reality. The fact of the matter is that you need credible, reliable evidence to back up your claims. In the absence of such, you have nothing more than the ability to raise eyebrows in the audience at a Jerry Springer Show taping.

Next, you completely contradict yourself. First you say this matter should be if away from the control of "Bernie Fife" - in reality the name is Barney Fife, just another incident in which your obvious and blatant stupidity rears its ugly head - and place it in the hands of ‘none other than" Vincent Bugliosi. Shortly thereafter, you say you "do not endorse or recommend Mr. Bugliosi, (sic) as a particular person..." That makes no more sense than the rest of your utterly stupid blithering. That is a complete and total contradiction. It makes as much sense as saying, "This is black, though it is not really black at all, but really white and completely white at that."

Third, what the hell does convicting Charles Manson of the Tate-LaBianca murders have to do with your "SCANDAL". That was a murder trial, not a scandal. The only thing remotely scandalous was the fact that these crimes were very high profile - due to the victims chosen - and the particularly gruesome way in which they were carried out. Furthermore, the challenging part of that case was convincing a jury that Manson was convinced that the Beatles were speaking to him through their music, that Helter Skelter was his way of igniting a race war that would ultimately leave Manson himself in charge of the world, and that Manson exerted control over a bunch of hippies to the extent of controlling even their sex lives. Is that what you're claiming, that this alleged "SCANDAL" involves a musical group communicating with its perpetrator(s), that the ultimate goal is igniting a race war to empower the perpetrator(s), and that it involves controlling every last detail of these people's lives? From your ineloquent ravings, it sounds more like an internal matter to be handled within an organization.

It's been said that , a little knowledge is a dangerous thing." If that's true, then I'm afraid you, sir, are extremely dangerous.

Because you appear to comprehend the complicated world of the English language, would you be so kind as to explain to us, in layman's terms, the meaning of the following?

1) "in all criminal prosecutions, the accused shall enjoy the right.... to have the assistance of Counsel for his defense."

2) "nor shall any State deprive any person of life, liberty, or property, without due process of law; nor deny to any person within its jurisdiction the equal protection of the laws."

Also, because you were deeply involved in the decision making process, with respect to "The Court Trial of the Century", could you explain the LEGAL grounds upon which Charles Manson was denied his Constitutional Right to represent himself with "the assistance of counsel"?

We humbly await your reply.

P.S. Please don't misinterpret our motives. We really don't give a damn whether MANSON is innocent, guilty, another messiah or just a mass murderer, but if the sacred Constitution upon which the glorious United States was founded has been reduced to a mere piece of' Ebay memorabilia, then we would like to inform our many listeners worldwide, that America just isn't what its forefathers had in mind.

By the way, it was uneducated Blacks, Mexicans and poor White folk that spilled their blood on battlefields so that YOU could attend the college of your choice. We certainly hope to help break that bad habit.

And while we have your attention, we have a most serious question, With respect to the LAPD SCANDAL if police officers have become such good actors that not even educated "officers of' the Court" can detect their false testimony, how can ordinary jury folk or "moon rocks" as one famous prosecutor describes them, be expected to make JUST decisions?

We, unlike the traditional media, are offering you a worldwide forum in which to express yourself UNEDITED and UNCENSORED and we admire your passion.

By the way again, in the third paragraph of' your letter, you make a comment with regard to our "utterly stupid blithering" in the context "This is black, though it is not really black at all, but really white and completely white at that."

Welcome to the 21st Century Mr. Bugliosi, the dinosaurs are gone and it's a NEW age. The following is a full-page advertisement taken from a recent national publication.

Now, pretend you are a detective and see how many inconsistencies or gray areas you can find in this NEW media ploy to raise money for low-income lawyers.