Who was in Mendocino on or before October of 1968?

We've discussed a little about who can be definitively placed in the Ukiah area on or before October of 1968. Deb mentioned this in the previous thread and sent me these articles to support it.

This Ukiah Daily Journal article from March 26, 1968 placed Dean Moorehouse in the area:

Ok, so this thing for me at least has just taken a turn for the weird with this article. It's the Ukiah Daily Journal from May 10, 1968. It places Brooks Poston in Mendocino County during that time in the company of... Reverend Jim Jones. Yes, THAT Reverend Jim Jones...

(This is the Poston section of the article cropped for easier reading): 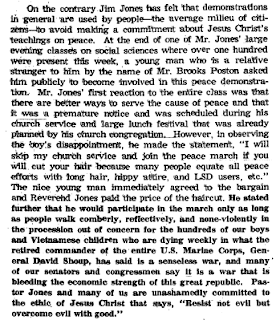 The third article is about the attorneys assigned to the girls in Mendocino County. It says that Ella Jo Bailey aka Ella Beth Sinder was released on her own recognizance to have surgery. Interestingly, the attorney representing her was Tim O'Brien, the same attorney that months later represented Don Dulaney.