https://en.wikipedia.org/wiki/Symbionese_Liberation_Army
The United Federated Forces of the Symbionese Liberation Army (SLA) was an American left-wing terrorist organization active between 1973 and 1975 that considered itself a vanguard army. The group committed bank robberies, two murders, and other acts of violence.
The SLA became internationally notorious for the kidnapping of heiress Patricia Hearst, abducting the 19-year-old from Berkeley, California. Interest increased when Hearst, in audiotaped messages delivered to (and broadcast by) regional news media, announced that she had joined the SLA. Hearst later said that members of the terrorist group threatened to kill her, held her in close confinement, and sexually assaulted and brainwashed her.

Similarities with the Manson Family:


--Both groups were led by charismatic ex-cons.
For the SLA it was Donald DeFreeze (aka General Field Marshall Cinque DeFreeze):

From the book Season of the Witch: Enchantment, Terror, and Deliverance in the City of Love, by David Talbot c. 2012  pg174
The SLA leader mesmerized his followers with his revolutionary gibberish ....

https://escholarship.org/content/qt8tw2935x/qt8tw2935x.pdf
Hearst... stated that whenever Cinque had a point of view, “no one doubted anything he said.”

--Both Charlie and Cinque had delusions of divinity:

https://escholarship.org/content/qt8tw2935x/qt8tw2935x.pdf
... Cinque gathered his small army together for what he considered a major announcement.  While drinking his ever present plum wine, he told his troops that he had just discovered that “I am really a prophet.  I am here on earth to lead the people.”

--Their philosophies were similar:

The Voices of Guns by Vin McClelland and Paul Avery  pg19
This was to be a black revolution, a neo-Maoist Helter Skelter, the triumph of the nonwhite over the bourgeois white capitalists.

Season of the Witch by David Talbot  pg174
..."the revolutionary vanguard" believed that it was its duty to set an example and inspire the people to rise up*. A thick air of doom and drama hung over the youth...  'As the SLA assassins ran for their getaway car, she was heard giggling. When Steiner asked Nancy how she felt about killing a person, she said, "He's not a person, he's a pig." '

*just like Charlie would have to show the blacks how to do it.

--Manson had his well-known 'get out of jail free' card.  And so did DeFreeze:

https://en.wikipedia.org/wiki/Symbionese_Liberation_Army
DeFreeze escaped from Soledad State Prison on March 5, 1973, by walking away while on work duty in a boiler room located outside the perimeter fence.

Season of the Witch by David Talbot   pg174
As Cinque roamed around the Bay Area, prison authorities seemed surprisingly lax about tracking him down. ...

pg193
Lake Headley, a Los Angeles private investigator hired ... to dig into Cinque's shadowy past,.. ran down Cinque's long rap sheet and the special treatment he had received from police and the courts as a multiple offender. Headley, whom Manson prosecutor Vincent Bugliosi once hailed as "the best private investigator on earth" .... came the closest to understanding Cinque. He was a "monster," Headley said, created in the dark criminal netherworld where police and government agencies manufacture their agents of chaos. And when their Frankenstein went rogue and began imagining that he truly was a revolutionary hero, he had to be put down.

Season of the Witch, by David Talbot  pg174
...Cinque's consciousness-raising class became the seedbed for the Symbionese Liberation Army, an "army" ... made up of earnest, middle-class firebrands suffering from deep self-loathing...

https://escholarship.org/content/qt8tw2935x/qt8tw2935x.pdf
...the SLA demonstrated a knack for developing alternate identities.. They kept isolated from their past lives...

https://escholarship.org/content/qt8tw2935x/qt8tw2935x.pdf
When Patricia began opening up to Angela Atwood and Willie Wolfe regarding her personal and family life, she found the love and acceptance that she had not found at home with her family.  ....

The Voices of Guns, by Vin McClelland and Paul Avery   pg36
In two months of isolated captivity a conventionally liberal teenage girl had been completely transformed, brought to the point where she was apparently willing to kill and smirk.

--Both groups had celebrity victims.  Both had victims who were the heiresses of wealthy old-line blue-blood California families from the Bay Area.

--Both had group sex practices.

Season of the Witch by David Talbot   pg174
He strutted around the SLA's various safe houses buck naked and fully erect, quickly establishing sexual dominion over the women in his flock... Cinque and his women formed the power nucleus within the group. None of the men ever challenged him; his...  prison credentials gave him supreme status.

--Both had cute nicknames for the members.

Check out this excellent short video:

--Both groups were steeped in talk about death and destruction:

https://escholarship.org/content/qt8tw2935x/qt8tw2935x.pdf
“Death stalked the foul air in that safe house,” wrote Patricia, “More than ever before, all of them talked of death.  Hardly a day or night went by but that someone mentioned death and others quickly took up the subject.”

--Both had people linked to their groups that tried to whack the President.

In Manson's case it was of course Squeaky Fromme, who pulled a .45 on the President during an appearance in Sacramento on September 5, 1975.

In DeFreeze's case, it was Sarah Jane Moore, who sent a .45 round whizzing past President Ford's head in San Francisco just 17 days later, on Sept 22, 1975.   She was not a follower, but rather a volunteer in the organization set up by Patricia Hearst's father to comply with the kidnapper's demands to deliver free food to the poor before they would release his daughter.  But even before that, she was an informant for the FBI.
[She was also a visitor at the radical Wellspring Commune's Northern California retreat.  Also at this camp at the time was one-time Family member Larry Bailey.]

Soliah: The SaraJane Olson Story, by Sharon Darby Hendry, pg114
She(Moore) knew people who knew its members and would admit later on, "I had a catalog--I was one of the few people around who had a copy of every one of the SLA tapes, every one its communiques."

--Both the Mansons and the SLA were media darlings, with the Media giving them all the publicity they ever wanted to spread their goals:

https://escholarship.org/content/qt8tw2935x/qt8tw2935x.pdf
What made the SLA so unique was their access to the media.  Every communiqué was published and every audio recording played for public consumption.  No other movement within the New Left ever had such easy media access as the SLA had.
... The media placed the SLA on center stage for all to see and hear....  they also served as enablers for the SLA’s enthusiasm for publicity.  Cinque and his followers knew that any public action or statement created instant news.

--Both had probable government informants planted within their ranks.

Though significantly, it appears DeFreeze was an informant himself:

Vegas PI  Lake Headley  pg128
During the early fall of 1968, the LAPD detective and his agents, including DeFreeze, became part of a new subversive super secret unit--the Criminal Conspiracy Section (CCS).  DeFreeze's job involved moving guns and grenades to be used against the Black Panther Party.

--Both committed terrible crimes to kick start the revolution, but that just ended up advancing the agenda of The Man.

https://escholarship.org/content/qt8tw2935x/qt8tw2935x.pdf
...what resulted from this unique opportunity to take a deeper look into the issues and concerns of the New Left led not to the embrace of these ideas by the middle class, but their almost total alienation from the SLA and its goals.   ... Within progressive circles, discussions concerning Cinque as an agent provocateur ensued because the actions of the SLA led directly to police actions against those involved in progressive causes.

http://disinfo.com/2013/01/the-parts-left-out-of-the-patty-hearst-trial-part-2/
The family of slain SLA member Willie Wolfe hired Lake Headley–an ex-police intelligence officer who was chief investigator at Wounded Knee–to find out what had really happened. What he discovered, with fellow researchers Donald Freed and Rusty Rhodes, was that the SLA was part of the CIA’s CHAOS program.

-- https://escholarship.org/content/qt8tw2935x/qt8tw2935x.pdf
After taking the photograph, in a manner similar to that of the American military, the members of the cell proceeded to “unceremoniously cut off” Patricia/Tania’s hair leaving “no more than a half-inch growth” around her head.

Season of the Witch by David Talbot   pg176
"I crave the power Charles Manson had," declared Cinque, who claimed that he had met the fellow ex-con in Los Angeles."

aadl.org/node/200649
Who Ran The SLA? by Dick Russell
Ann Arbor Sun, January 22, 1976
(Donald) DeFreeze, as an informer for a special Public Disorder Intelligence Unit(of the LAPD), did not want for "useful" tasks. During the fall of 1969, police sources recall DeFreeze informing on the Charles Manson family concerning a planned arms burglary. He next surfaces in Cleveland on October 11...

More evidence that Charlie knew Cinque is this insert from the 'Lie' Album of Manson tunes, which was signed by fellow inmates at the Los Angeles County Jail, probably in the spring of 1970 when Charlie was there awaiting trial, and shortly after the album was released. 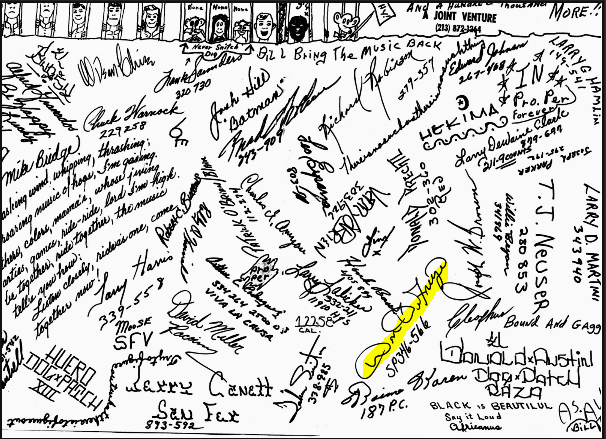 Highlighted in yellow you can clearly read "Donald DeFreeze."  It's entirely possible that were even friendly during that time period.