This article was sent to mansonblog.com by Jude Camillone, a freelance writer. We are grateful for his generous input. Camillone is a native of New Rochelle, NY. He attended Florida Atlantic University on a full academic scholarship. He graduated with full academic honors, BA in Communication (specialty Print Journalism) then an MA in Communication.

He was a newspaper journalist for South Florida Sun-Sentinel and Orlando Sentinel for total of 9 years. He is followed by Freelance Journalist for national magazines. His most recent articles are published in Palm Springs Life.

His views are his own and not necessarily shared by the authors of mansonblog.com 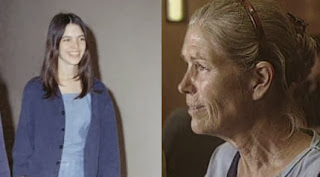 I know of a woman who, as an underage girl, ran away from home. She joined a cult led by an evil manipulative man. This man was twice her age. He brainwashed her with daily doses of LSD. This twisted, demented cult leader manipulated her, exploited her and eventually coerced her into “joining in” on the second of two nights of cult violence and mayhem. This girl at this time was 19. More than two years of brainwashing had its effect, sadly. Although this girl participated the very least of any of the older cultists who committed far more heinous mayhem, she received the same exact death sentence as the others.

She was tried and tried again in her early 20s, but has essentially been in jail for the past 40 years. Her name is Leslie Van Houten. She is nearly 65 years old. And although she has apologized a million times over, and has worked as a mentor to prisoners who were released decades ago – for committing far worse crimes – Leslie Van Houten remains incarcerated. For the past decade she has most definitely been what is only defined as a POLITICAL PRISONER of the State of California. And Leslie Van Houten must be paroled.

Leslie Van Houten cannot escape the name of the evil, sick cult leader she is sadly forever associated with. His name is Manson and I despise him. I must say this: Occasionally a stranger or a friend will write me or ask me, “Oh, you must be ‘into’ Manson then?”

This query makes my skin crawl whenever I hear an uninformed person ask such a question. These are my thoughts on that awful man: He was and IS still a crazed megalomaniacal dangerous manipulative pedophile who preyed on the most vulnerable of teens and in the worst possible ways. I write many things here about unfairness of our justice system, etc., but I have to blame that utter egomaniac. His awful name is the anchor, the albatross, the true “jailer” which Leslie must forever be associated.

Every single time that awful manson, that subhuman excuse for a person, spouts his gibberish for the world to hear, it keeps Leslie Van Houten behind bars for another year or so. I wonder, had that awful man simply perished in his sleep say, oh, two or three decades ago when he was 60 0r 50, perhaps LVH would today be free. It is unfair to Leslie that the Bearded Idiot continues to be given a forum. HE is keeping Leslie in jail. As much as anything or anyone else. Lest we forget, Leslie was a child, half the age of that awful Manson who essentially put her in jail, and put her in jail again. And again. Time and time again, he keeps her in jail. So NO, I am not “into” Manson. Any more than I would be “into” sending any of our daughters to go live with him on his sick twisted ranch. And that is the battle Leslie fights daily, and I am fighting on her behalf too, trying to explain to many people that we are not “into” Manson. I hate that man, and I wish he would have “gone away” many decades ago, before the Geraldo Riveras of the world made him a sick star. I hate Manson, because of what he did to this girl especially. he has made her suffer the most. and that is where I stand on that.

And now I shall reprint the comments of ANOTHER of Leslie van Houten’s other advocates and supporters, film director John Waters. I certainly agree with John’s words:

“I have a really good friend who was convicted of killing two innocent people when she was nineteen years old on a horrible night of 1969 cult madness. Her name is Leslie Van Houten and I think you would like her as much as I do. She was one of those notorious “Manson girls” who shaved their heads, carved X’s in their foreheads and laughed, joked, and sang their way through the courthouse straight to death row forty years ago. Leslie is hardly a “Manson girl” today.

Now 65 years old, she looks back from prison on her involvement in the La Bianca murders (the night after the Tate massacre) in utter horror, shame, and guilt and takes full responsibility for her part in the crimes. I think it’s time to parole her.

In 1985 I was doing some journalistic pieces for Rolling Stone and they asked me to interview Manson. I had little curiosity and was still much more interested in the followers who had come to their senses and were now definitely ex-followers. Leslie Van Houten always seemed the one that could have somehow ended up making movies with us instead of running with the killer dune-buggy crowd. She was pretty, out of her mind, rebellious, with fashion-daring, a good haircut…just like the girls in my movies. If Leslie had met me instead of Charlie, could she have gone to the Cannes Film Festival instead of the California Institute for Women? Actually, I think if Leslie hadn’t met either of us she might have ended up as a studio executive in the movie business in Los Angeles. A good one, too.

So I pleaded with Jann Wenner, the editor of Rolling Stone, to let me interview Leslie, “the only one who has a chance of ever getting out”, the one I could tell from press reports had broken from Manson’s control and was beginning to see that the apocalyptical scenario Manson had preached was complete bullshit.

In 1972, Leslie’s death sentence (and those of her co-defendants) had been abolished by the California State Supreme Court and like all death penalty prisoners at the time, her sentence had been changed to life in prison. Not life without parole. The two other female death-penalty cases at the time besides the three “Manson girls”, also murderesses with very serious cases, were paroled eight or nine years later with little fanfare or outrage.

In 1976, Leslie’s original conviction was thrown out due to “ineffectual counsel” (her original lawyer drowned in the middle of her trial and was replaced) and she was given a new trial in 1977. This time, she was all by herself as a defendant in the courtroom. Remorse had started to creep in soon after she was imprisoned away from Manson. Locked away forever, Leslie, Susan, and Patricia were of no further use to Charlie and he dropped them quickly. The outsider voices of reason from the prison social workers started to seep in and Leslie began to see the holes in Manson’s brainwashing. “When I’d be questioned,” she later told author Karlene Faith for her very insightful and intelligent but little known book The Long Prison Journey of Leslie Van Houten, “I’d go blank and become frustrated like when a machine jams and just sits there making noise. In my head nothing was functioning. I was trying to understand, breaking down stiff little slogans that had been drilled into me.” When two other “Manson girls”, Mary Brunner and Catherine Shaw, were sent to jail and placed with Leslie, Susan and Patricia, Leslie grew tired of listening to their Manson talk and confided to Patricia that “I’ve changed. I’m not into this.” “It took three years to understand” and five or six years of therapy to “take responsibility” for the terrible crime she had helped commit.

Leslie finally had a good lawyer for her second trial. Taking the witness stand truthfully for the first time, she tried to explain her state of mind through the Manson madness and his control techniques. And the jury listened, too. After about twenty-five days of deliberation there was a hung jury; seven voted for guilty of first-degree murder, and five for manslaughter due to her cult domination and uncertain mental health at the time of the crime.

Refusing to offer a plea bargain, the prosecutor took her to trial for a third time in 1978 and added a felony robbery motive (clothes, a wallet and a few coins had been taken from the La Bianca home), a crime that now couldn’t legally be excused by state of mind. But this time Leslie made bail and was released from prison. She found employment as a law clerk and lived in the Echo Park area of Los Angeles. She was free for six months and lived quietly, unnoticed by the press. When a few of her new neighbors found out who she really was, after they already thought they knew her, all were “supportive” and “protective” of her anonymity.

When Leslie’s third trial finally began, she came to court every day on her own. Long gone was the shaved head, and the X on her forehead was covered by bangs. No more trippy little riot-on-Sunset-Strip, satin miniskirt outfits either, like the ones she and her female co-defendants wore to the first trial. This time she was dressed tastefully and looked lovely, something that obviously didn’t sit well with Stephen Kay, the prosecutor who had inherited all the Manson-related cases from Vincent Bugliosi. “All dolled up”, Mr. Kay cracked to the press, giving Leslie one of her first, but definitely not last, opinionated fashion reviews. When she was finally convicted of first-degree murder at the end of the trial, life imprisonment suddenly became very real.

Rolling Stone gave me the go-ahead to pursue the Leslie Van Houten interview so, in 1985, seven years after her final conviction, I wrote to “The Friends of Leslie”, a now-disbanded, loose-knit support group made up of Leslie’s real family (Mom, Dad, brothers, sisters — all glad to have her back from Manson even if it was in prison) and her jail-house teachers and counselors who had seen how this teenage girl had been completely dominated by one of the most notorious madmen of our time.” (Excerpted from the book Role Models by John Waters.)

John Waters said it, and I will say it: It is time to FREE LESLIE VAN HOUTEN. And for the record, I utterly despise Manson. Leslie is NOT that evil man, who brainwashed her when she was a mere child. Free Leslie. She is nearly 65, and has been incarcerated for 45 years for a crime she committed as a child. Let her go and let her be free.