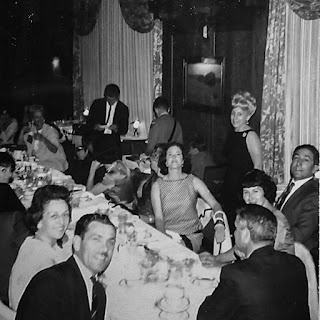 This is hungry work.

Apologies to Hozier. A Super Bowl feast is cooking behind me while I type and I want all of it now. Thanks for letting me hang out with you today and also for my continuing education.
- Let's also take a second to recognize the Col apologizing to Grim last week and Grim being all okay thanks we're cool. Tears flooded my eyes and I don't mean fake Sadie Mae Glutz ones. This bitter Manson world needs more of that.
*Begins trashing others.
Not really. I bring just a single question, a handful of photos, and several screen caps into the Colosseum today. Before we get started, let's give a quick shoutout to the almighty cielodrive.com for providing us with with both LaBianca Homicide Investigative Reports for our discussion.
#1
#2
Last week, I gleefully dove into a new rabbit hole hoping to land on a police document verifying the claim that an office safe at a Gateway Market store was wide open the morning after the murders of Leno and Rosemary LaBianca. Neil Sanders adds the safe at Rosemary's dress shop to the list of opened safes.
My gut feeling is all roads lead to Bill Nelson and the safes are nothing more than an often repeated opinion, but I'm wrong a lot and want to ask you blog readers. Do any of you have a police report that details open safes at LaBianca businesses the morning after their deaths? I failed in my quest to find one.
Being a rube scoot, I also learned Leno ran a second family company during the same search. This is from the 2nd report linked above. I broke the word salad into readable segments and fixed a couple of typos.
Peter DeSantis, Leno's other brother-in-law, was interviewed and polygraphed at Parker Center. The polygraph exam indicated he had no guilty knowledge of the crime.
DeSantis has been a lifelong friend of Leno and described him as "family." They worked together at the market for Leno's father in the '40's. Leno later ran the operation of State Wholesale Grocers, a second company owned by Leno's father. Smaldino, another brother-in-law, ran the Gateway Market chain. When Leno's father died the two companies were then managed by Leno, although they remained separate.
DeSantis believed Smaldino resented Leno's being the boss as he, Smaldino, knew more about the business. Smaldino kept a constant check on Leno's activities in the business and Leno resented Smaldino's 'supervision.'
Leno once commented to Norwood, when discussing how he was taking money from the company by writing checks, that he couldn't have done it when Smaldino was around because Smaldino checked him too closely. Leno's mother was the first to tell DeSantis about Leno taking money from the company. DeSantis claimed he was shocked, as the two had discussed ways to cut expenses to help the company.
Leno told DeSantis in June 1969 that he was going to leave the company. DeSantis discussed Leno's future plans with him. Leno told DeSantis ha had no definite plans for employment. He mentioned going into an investment situation with three other men. Each man was to put up $25,000. The only man in the group that Leno mentioned was Bill O'Brien.
After Leno's death, DeSantis learned he was planning to buy a ranch for $127,000 in Vista, California. DeSantis couldn't understand where Leno was to get the money to purchase the property, pay back the money he had borrowed from the company and go into the investment business.
DeSantis is the regional head of a fraternal organization, The Sons of Italy. The region extends from Colorado to Hawaii. DeSantis refused the idea that the Mafia could have been responsible for the crime. He commented that if they had, he would probably have heard about it.
"Are you trying to get me killed?" - DeSantis
My brain wheezed into action. DeSantis is high up in the company. Is he the number two guy behind Leno? Why didn't DeSantis say anything about empty safes to investigators? If not him, who found the safe open and at which store? Which executive handled the matter with the police?
And where is the police report?
Off I went. The First Homicide Investigation Report misidentifies Rosemary's dress as a peignoir. 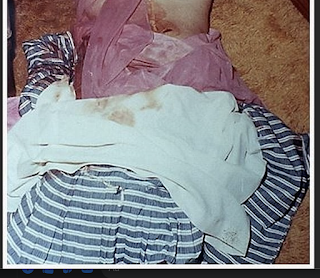 That's a cropped photo of Rosemary. She's on her stomach and her dress and nightgown are pulled up over her head. Leslie destroyed her. The photo alone seems like it's enough to doom you forever if someone repeatedly shoves it into parole board folders prior to hearings. 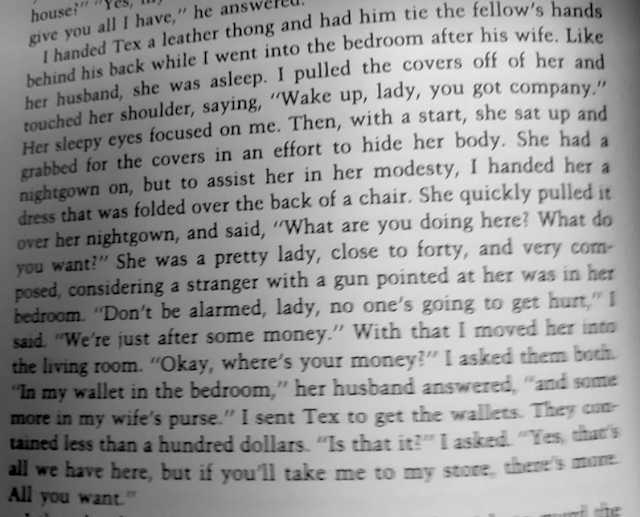 That's Manson in Emmons. Same source for the following. 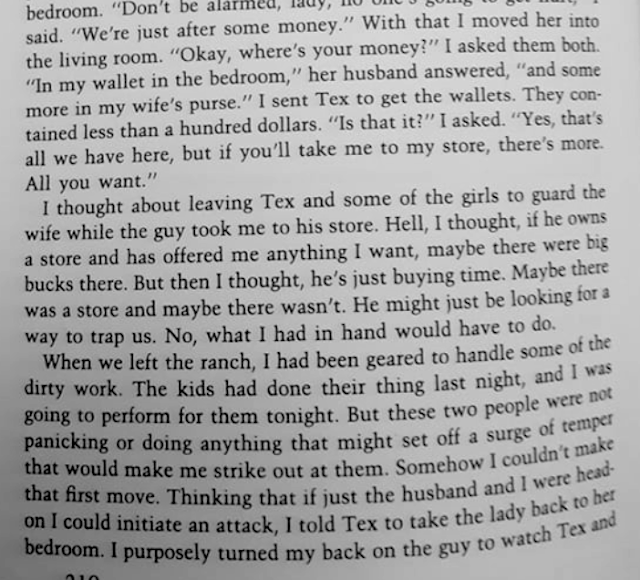 Two quick takes from the above. Charlie hands Rosemary her dress for the sake of modesty, and Charlie declines Leno's offer of a trip to his store for more money. "All you want."
Common arguments against Emmons include Charlie split with the author when Emmons revealed too much, or when Emmons was outright lying. If what Charlie told Emmons is correct, he never considered removing Rosemary from the home.
Three decades later, Author Neil Sanders -- in a book many call a ripoff of Schreck -- concludes Rosemary left with her hit squad because of the dress and where the boat was found.
[Note: When Schreck's book arrives, I'll be back to compare the two. But for now, all I have in my library is Neil Sanders.] 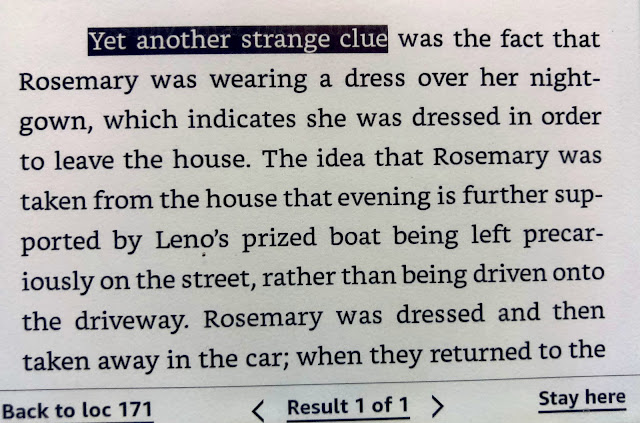 Anyone with a link or recording of Charlie saying they took the LaBiancas to their stores that night, please send it along. More from Neil Sanders: 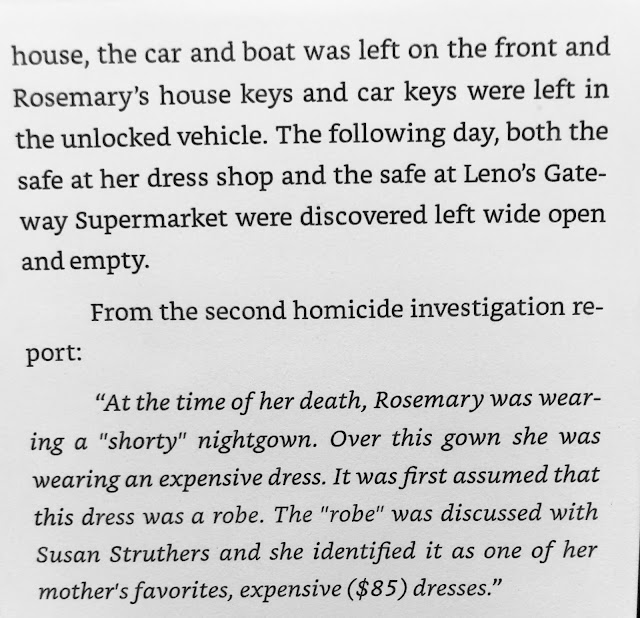 Let's check the source on that. From Bugliosi:
Rosemary LaBianca was lying face down on the bedroom floor, parallel to the bed and dresser, in a large pool of blood. She was wearing a short pink nightgown and, over it, an expensive dress, blue with white horizontal stripes, which Suzanne would later identify as one of her mother’s favorites. Both nightgown and dress were bunched up over her head, so her back, buttocks, and legs were bare. Cline didn’t even try to count the stab wounds, there were so many. Her hands were not tied but, like Leno, she had a pillowcase over her head and a lamp cord was wrapped around her neck. The cord was attached to one of a pair of bedroom lamps, both of which had overturned. The tautness of the cord, plus a second pool of blood about two feet from the body, indicated that perhaps she had tried to crawl, pulling the lamps over while doing so.
Okay, cool. Bugs is about to mention the ride to Gateway and the dress shop, right? Let's keep reading.
A second pink DOA slip was filled out, for Mrs. Rosemary LaBianca. Joe Dorgan had to tell Suzanne and Frank.
There was writing, in what appeared to be blood, in three places in the residence. High up on the north wall in the living room, above several paintings, were printed the words DEATH TO PIGS. On the south wall, to the left of the front door, even higher up, was the single word RISE. There were two words on the refrigerator door in the kitchen, the first of which was misspelled. They read HEALTER SKELTER.
Nope.
The guy with the biggest book in the study never mentions a trip to Gateway. Why would Sanders include that info in his argument? Bugs never mentions it.
I'm not a Bugliosi fan in any way. In fact, I'm the opposite. But it's worth mentioning the safes were not a part of the main discussion back in the 70's like they are today.
Without a police report, what other empirical evidence exists that Rosemary wearing a dress, and a boat in the street, equals the Manson gang took Rosemary to her and Leno's businesses and left the safes open? And how is the evidence verified?
The safes are enduringly fascinating. Proving it either way might mean a change on the mountaintop if someone is hungry enough. In the background, the argument has raged for more than a decade across Internet sites and in true crime books. Here's our Matt arguing with Starship on LSB so long ago.
Matt said...
Starship, it wasn't just an article, and I don't believe that it's "bullshit."
Leno, at the time he met Rosemary was relatively wealthy and stood to inherit a great deal when his mother passed away.
While married to Leno, Rosemary is still sleeping with Frank Struthers and Reba Gage. After the murders, Frank Sr. tells police that Frank Jr will be coming into a large inheritance from his mother. Later, Frank Sr. accuses Suzan LaBerge of ripping off Frank Jr in his inheritance.
It is alleged that at the time Suzan had emptied out the house and, before the police could get to it, a safe at Gateway Markets and then threatened any of Leno's family members that got in her way. Some members of her family believe that Suzan had a hand in the murders.
While married to Leno, Rosemary seems to try a lot of get rich quick routes. She gets her real estate license, her insurance license, opens a dress shop, and eventually begins getting into real estate, stocks, and securities.
People assume that Leno's financial troubles were due to gambling. Others believe that Rosemary bled him dry by spending lavishly, buying a house that was beyond their means (Working Way) and eventually having him invest in real estate, stocks, and securities and forming dummy corps to hide their funds and avoid taxes.
While Leno's getting poorer, Rosemary may be getting richer and hiding the money from Leno in secret accounts.
To avoid financial ruin, Leno sells the house on Working Way at a large profit and buys the family home on Waverly. With that money he continues to make bad real estate investments - Myca Corp and a Riverside Parcel investment scam. And begins skimming off money from Gateway.
Leno misappropriated $200,000 from Gateway. They had a combined debt of $30,000 "their properties were extensively mortgaged."
In the meantime, Rosemary is moving out of her truck boutique and into a real store front - and possibly opened at least 2 others and co-owned (good friend) Lucy Larsen's Pet Shop.
These are not suppositions, Sunset. They are all in the police reports (the second one in particular).
Suzan LaBerge enters the narrative at some point as a safe robber if you're unaware. Not sure how she'd have the safe codes at Gateway but whatever. Outside of that, I don't have a ton for you. The safes have been talked to death.
But I'm stubborn, and I'm trying to put a single fact into place here in the place where no sense makes sense.
Might anyone have a police report?
-------------
Bonus. When John and Leslie first locked eyes. 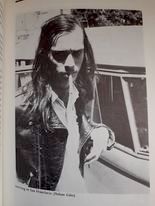