A Painting, A Pinocchio, & The Manson Murders - Antiques with Gary Stover


Chris has a painting done in 1968 at the home of one of the victims of the Manson murders, Abigail Folger. He has a wooden pinocchio given to him by Sharon Tate and a book given to his brother by Abigail. You won't believe how these objects and Chris' remembrances of the victims intersect to create an improbable, but true, story set against the backdrop of Hollywood's most notorious crime, the brutal murders perpetrated by the Charles Manson Family at the home of Roman Polanski and Sharon Tate in August 1969. Chris paints an unforgettable portrait of Gibby Folger and Sharon Tate, both of whom he knew as a child. These victims turn out not to be the people you thought you knew from accounts written by the sleeze press of the 1960's. They were loving, compassionate human beings whose lives were tragically cut short. You won't want to miss one of the great untold stories of the year!

"At the same time I interviewed Linda's husband, Robert Kasabian, I also talked to Charles Melton, the hippie philanthropist from whom Linda had stolen the $5,000. Melton said that in early April 1969 (before Linda ever met the Family) he had gone to Spahn Ranch to see Paul Watkins. While there, Melton had met Tex, who, admiring Melton's beard, commented, "Maybe Charlie will let me grow a beard someday."

"It would be difficult to find a better example of Manson's domination of Watson."

That this is the best example Bugliosi could find of Charles Manson's domination of Charles Watson shows how negligible that supposed domination really was, for the only two photographs taken of Watson during the period he lived at Spahn's Ranch with Manson show him to be bearded. 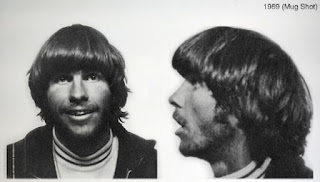 Charles Watson after his arrest for being under the influence of
Belladonna (Jimson Weed?) on April 23, 1969 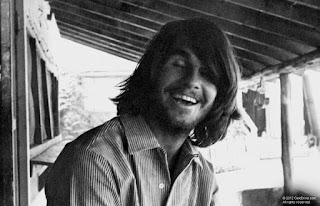 Charles "Tex" Watson at the Spahn Movie Ranch in 1969

Oh, Charlie did tell him to shave, but there was really a more mundane reason for Manson's "demand" that Watson (and, indeed, all the males at Spahn Ranch) remain clean shaven beyond his alleged desire to take control over every aspect of their lives. While it might be hard to believe in a day and age where Grandma is tattooed and pierced and the guy checking your groceries has dinner plates in his ear lobes, in the late 1960s men wearing beards (not to mention long hair!) could actually be considered radical. George Spahn (the owner of Spahn Ranch) was running a business -- horse riding rentals -- that depended to some degree on drop-in customer traffic. Therefore, he wanted his ranch to be as welcoming and friendly -- and normal -- as possible to prospective riders. On top of this, Spahn was also somewhat "old school," and he equated "beards" with "bums." For these two reasons he didn't want a bunch of bearded bums lounging around when Mrs. San Fernando Valley came in to investigate the ranch as a possible place for Sally and her friends to go horseback riding.

It was George Spahn who instituted the "no beards" rule at Spahn's Ranch, not Charles Manson. Manson's directive to Watson regarding his whiskers was merely a pass down of the orders of George Spahn; it was not part of any mind/ body/soul-control agenda of his own.

Based on my forty-plus years of beard wearing I would categorize Watson's efforts as pretty scraggly. Nevertheless, he looks more bearded than he does clean-shaven, and it's apparent that at some point Manson noticed Watson's facial hair and mentioned it to him. But Watson  was no more "dominated" by having to shave than are the hundreds of thousands of other males who have toned down their preferred appearances for the sake of dress code policies relative to employment opportunities. I did the same thing in 1980 when I cut my hair and shaved off my beard as a condition for working with the Fred Harvey concessionaire at Furnace Creek in Death Valley. (And as much as I enjoyed working there I would not have considered committing mass  murder on the company's behalf.)