When Sharon Tate was murdered on the night of August 8-9, 1969 she not only died a horrific death but she also died intestate, meaning that she died leaving no will. In an effort to remove his daughter’s estate from legal limbo  and begin the process of property distribution Tate’s father Paul Tate filed a Petition For Letters of Authorization with the Los Angeles Superior Court on December 8, 1969: 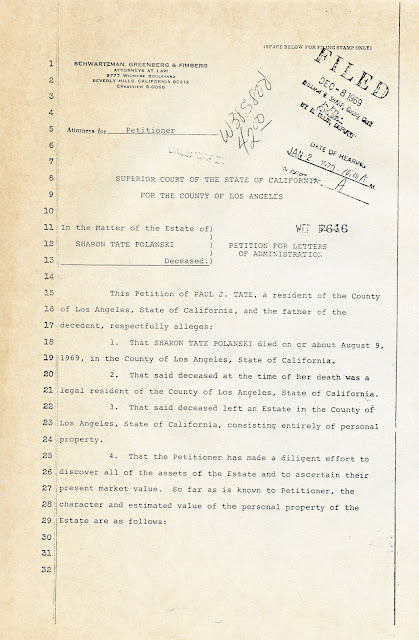 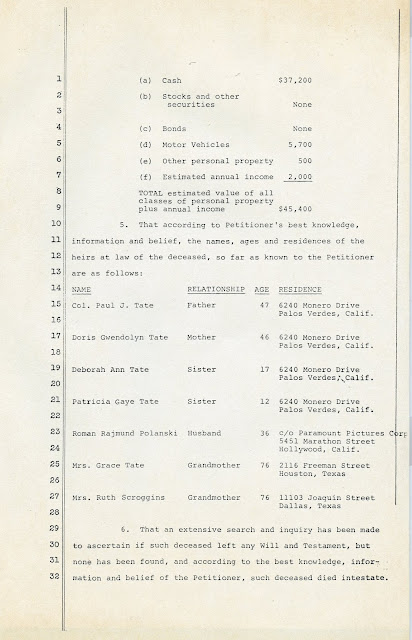 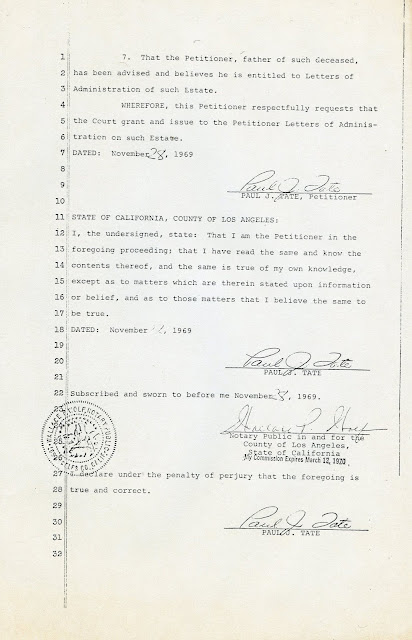 The main purpose of the Petition For Letters Of Authorization was so that Tate’s estate could be evaluated for distribution to deserving next-of-kin and others. One person who didn’t want any part of the late actress’ worth, however, was her widowered husband Roman Polanski. Both privately and in a letter dated February 1, 1970 Polanski made it clear to Paul Tate that he wanted no part of the estate of his late daughter. 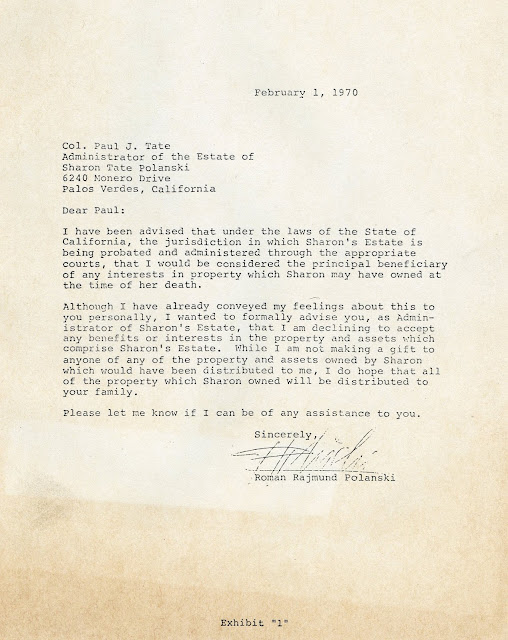 Not everyone, however, was content to let tragedy recede. Within a month of the murders, 10050 Cielo Drive owner Rudi Altobelli had resumed residence in the main house. On April 13, 1970 he filed a claim with the Superior Court of Los Angeles for monetary damages against the estate of Sharon Tate on the basis that Tate had not purchased $125,000 of public liability and property damage insurance as required by the lease agreement between the Polanskis and Altobelli. For this offense Altobelli requested relief for damages in the amount of $15,000 ($93,113.27 in 2016). A further claim was made due to the fact that the original lease stated that the premises could only be used as a single-family residence and that the presence of Frykowski and Folger on the property as full-time residents violated that portion of the lease and damaged him in the sum of “at least $30,000” ($186,226.65 today). 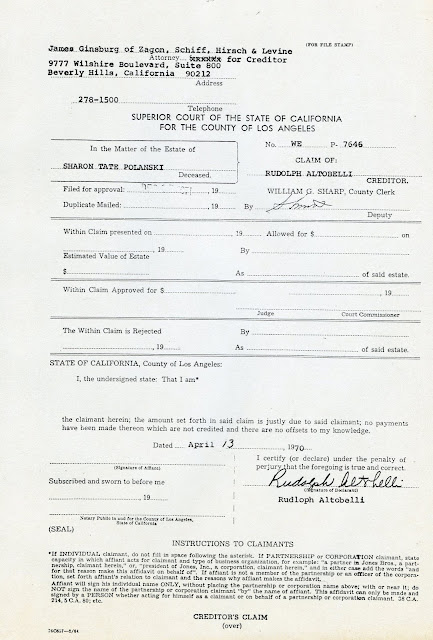 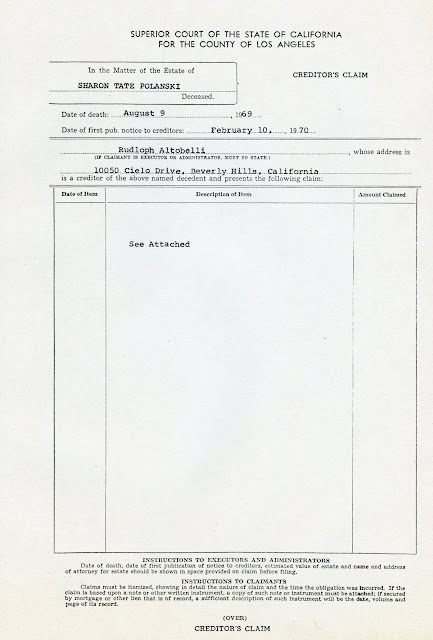 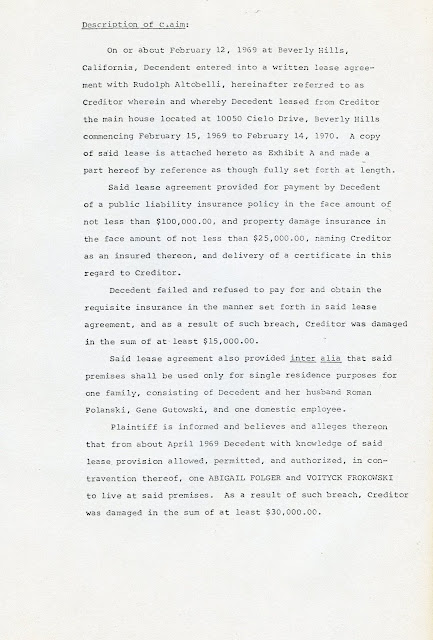 But Altobelli’s ex post facto irritation at the presence of Frykowski and Folger at his house seems opportunistic, because he almost certainly knew that the pair had been residing in his house almost as long as the Polanskis and therefore had would have had numerous opportunities to broach the subject with the latter if he had had real concerns about the situation.

The Polanskis rented the house in early February 1969 but went to Europe in March. Voytek Frykowski and Abigail Folger were already living in the house at that time. At the time of the murders Altobelli must have known about the living situation in his house because he knew that Roman Polanski was already in Europe, and he obviously knew Sharon was on her way to Europe because she was seated next to him on the airplane when he himself went. And when Altobelli recounted to Vincent Bugliosi Charles Manson’s appearance at Cielo Drive on March 23, 1969 he recalled that Sharon, Jay Sebring, Frykowski, and Folger (whom he referred to familiarly as “Gibby”) were all present in the main house. (Altobelli and Sharon Tate flew to Europe the next day. He was still in Europe when the murders occurred. Sharon, very unfortunately, returned to Los Angeles and the Cielo Drive house on July 21.)

Altobelli lived in house for another twenty years after the murders, apparently unfazed by the slaughter that had occurred there. “It is a home,” he said during the murder trial. “It’s not going to be a tourist attraction or a freak show.”  Years later he recalled, “"I moved right back into the house three weeks after the murders happened. When I came back to that property, I felt safe, secure, loved and beauty." Eventually he was also likely unfazed by any financial damages he night have incurred due to Sharon Tate’s not obtaining public liability insurance and the presence of Voytek Frykowski and Abigail Folger as illegal house residents: Altobelli sold the house in 1989 for $1.6 million, 18 times what he paid for it ($86,000) in the early 1960s.  He died in Los Angeles on March 26, 2011.