Charles Manson and the Killing of Shorty Shea 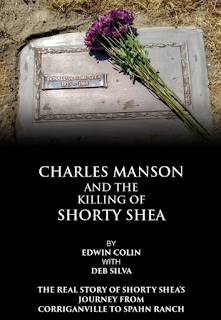 Edwin Colin grew up at Corriganville movie ranch where his father was Crash Corrigan's foreman.  Ed met many people, some famous western stars and many, many stuntmen who were the stars of Corriganville's weekend shows.  One such stuntman who stood out to Ed was Shorty Shea.  Shorty became a close friend of the Colin family, frequently coming over for family dinners and being an older "big brother" to Ed.  Shorty was the one to pick out Ed's first horse and teach him a thing or two about working on a ranch.

To honor his friend, Ed has written a touching memoir along with attempting to find the truths behind Shorty's murder.  Ed has plenty to say about Shorty but when it came to the particulars about Charles Manson and the Family his knowledge was a little sketchy.  He found there were so many conflicting versions about what actually happened that he sought someone to help him through the Manson maze.

That is how I became to be the "with" author on this book.  It wasn't a project I wished to take on, writing a book takes an enormous amount of time, but Ed convinced me that my help would greatly enrich his book and it was clear to me that Ed truly wanted to do this project as correctly as possible.

The book is self published, we don't have a website but we do have a Facebook page where you can contact Ed to purchase a book.

Ed did an interview about the book with his local newspaper.  You can read the article here-