The Times Literary Supplement began as a supplement to The Times, a London newspaper, but became a separate publication 100 years ago though they still enjoy a close association with that newspaper today.   It is considered by many writers to be an indispensable source for serious and authoritative reviews.  Forty years ago TLS reviewed Bugliosi's Helter Skelter and I was struck by how insightful the review was of the author at a time when most US reviewers thought Bugliosi could do no wrong.

The book was published under the title of The Manson Murders -  An Investigation Into Motive in the UK. 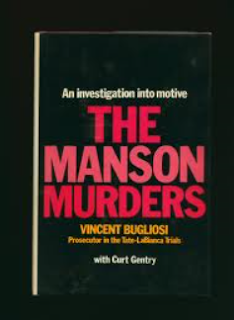 The Manson Murders is a detailed, day-by-day account of the investigations into the Sharon Tate and La Bianca murders in Los Angeles in August 1969, and of the arrest, trial and conviction of Charles Manson and members of his "Family" in 1970-71.  Its author, Vincent Bugliosi, was prosecutor at the trial.

The English, though not the American edition, is subtitled "An Investigation Into Motive", and it therefore as such that it must presumably be reviewed in this country, even though it is obvious that elucidation of Manson's motives for murdering and inciting to murder, was not Professor Bugliosi's main motive for writing this book.

If it had been, he would presumably not have written it in a narrative form, first sketching in the facts already known to police before he himself became involved in the case and thereafter describing the investigations and the court proceedings entirely in terms of a day-by-day account of his own activities.  For instance, Professor Bugliosi reveals what he considers to have been the motive for the murders in two chapters, "January 1970" and "February 1970", which are the months during which he, already convinced on the circumstantial evidence that Manson must have been the prime mover behind the murders that on commonsense grounds appeared motiveless, began to understand something of the ideology and chiliastic beliefs that inspired Manson and his "Family".  Although this method of presenting the case makes for lively and exciting reading, it is also bewildering, since Professor Bugliosi records events not in the order in which they happened but in the order in which he learnt about them.  It also has the effect of drawing the reader's attention away from Manson and on to Professor Bugliosi, and, although prosecuting attorneys do, I presume, legitimately play star roles during murder trials, I doubt whether they should continue to steal the limelight while writing a book about the murders.


Professor Bugliosi must, I think, really have had two other reasons for writing this book; first to give as full account as possible of the longest, most publicized and most expensive trial in American legal history, and, secondly, to vindicate his own role in it.  He makes it clear that he insisted on establishing a motive for the murders, and a very peculiar motive at that, against the wishes of police, who would have been content with circumstantial proof; and, although it is hard for an English reviewer to be certain about this, the informality of his relations with the accused and with witnesses may well have raised eyebrows in some quarters.

His written account leaves the reader in no doubt as to which of the various besotted females in Manson's "Family" he liked and found attractive and which he found repellant or as to his opinion of individual detectives and defending counsel.  Furthermore he may well have had misgivings arising from the fact that the motive he proposed for the murders is, as we shall see, extremely hard to reconcile with the idea that Manson was sane enough to be charged.  I must confess, however, that both the court procedure and the moral tone of the trial were so unlike what, I hope, happens in English courts, that at times my credulity was strained; it sounds as though it was shambles from beginning to end.

It is clear, too, that Manson and Professor Bugliosi were in frequent communication with one another and each developed a reluctant respect for the other.  This book is, indeed, more easily read as a confrontation between the two men than as an attempt by one to investigate the motives of the other.  But, although Professor Bugliosi succeeds, accidently I suspect, in getting across the extent to which the trial was a duel between him and Manson, with Manson's life certainly at hazard- the death penalty was only abolished in California after his conviction, though before the appeals were heard- and Professor Bugliosi's possibly so, since throughout the trial many of Manson's followers were at large and known to be armed, he lacks the dramatic sense to present the trial as a contest between representatives of two opposed visions of the nature of society and the meaning of life and death.

Professor Bugliosi and Manson were both in their mid-thirties at the time of the trial, but, whereas Professor Bugliosi was a successful professional man, a district attorney and a professor of criminal law who had attended university on a tennis scholarship, Manson was a habitual criminal who had spent seventeen years of his life in reformatories and had convictions for armed robbery, burglary, car-thieving, forgery and pimping.  A not unusual contrast, one might have said, between a successful professional man and an unsuccessful criminal, were it not for the fact that somewhere along the line Manson had acquired some very curious, way-out ideas, which made him, in the eyes of himself and his followers, a legitimized adversary of the established order, exempt from its laws and conventions and no more a criminal than those of his and Professor Bugliosi's contemporaries who were fighting in Vietnam.

Unfortunately Professor Bugliosi's account of Manson's religious and political beliefs is so presented that it is impossible for the reader to decide whether Manson did in fact possess a reasoned, coherent though bizarre philosophy, which could have impelled him to plan and execute political murders, or whether his mind was really a rag-bag of half baked and delusional ideas.  Although he mentions that Manson had connexions with the flower-children, the drug-scene, the pop-scene, numerous groups and Scientology, and that he was an admirer of Nietzsche and Hitler and was believed by his followers to be Jesus Christ, Professor Bugliosi makes no attempt to assess Manson's philosophy seriously or to relate it to either the history of millennial Christianity or the sociology of the drop-out culture, about both of which an extensive literature does in fact exist.  As a result, Manson's ideas are presented as being more confused, inconsistent and autochthonous than they perhaps were, and, it is impossible to evaluate whether he was speaking literally or using religious metaphor when he asserted that he was already dead or implied that he was Jesus Christ- or whether the sexual performances he organized were orgies or rites.

This failure on Professor Bugliosi's part is particularly marked when he discusses the fact that Manson believed in both love and the permissibility of killing.  Professor Bugliosi, and apparently some of the other lawyers involved in the case, were deeply moved by the atmosphere of love that permeated the "Family".  One, indeed, wishes to write "a book about the beauty I've seen in that group- their opposition to war, their truthfulness and their generosity".  But they also believed in the triviality of death, and that killing was an unimportant event in the life of both the killer and the victim.  Now, although no society could conceivably tolerate members who acted on such a belief, any book that really was an investigation into the motives of the Manson murders would have had to explore that thread in Christian thinking which does lead to such a diabolical conclusion, and Professor Bugliosi's does not.  And it would have to explain why Manson thought it was morally justifiable to kill strangers in Los Angeles in order to provoke Armageddon but morally unjustifiable to kill strangers in Vietnam- or to commit soul murder in prisons- in order to preserve the American Way of Life.  As it is, however, Professor Bugliosi's account of Manson's motive- which was, briefly, to set off Armageddon by committing murders of whites which were made to look as though they had been committed by blacks- makes Manson sound terribly mad; even though the trial was based on the assumption that he was sane and fit to plead.

This is, indeed, the central weakness and contradiction of the whole book; it sets out to investigate Manson's motive for murder, but does so in a way that suggests that he should have never been tried.  It should be added that Manson, his followers, the lawyers and the psychiatrists all agreed that Manson was sane, that Manson never endorsed the motive ascribed to him by Professor Bugliosi, but that several of his followers and acquaintances attributed to him the belief that the Book of Revelations was about to be fulfilled, that the Beatles were the first Four Angels and wrote clarion-calls to revolution into their songs, and that the Bottomless Pit is just outside Los Angeles, all of which sounds very psychotic.