Windy was kind enough to take a Life magazine picture of Spahn Ranch and label it showing what each part of the main building was used for and what the surrounding things were in the picture.  She accompanied this with a narrative of how living and eating arrangements were before Charles Manson and the others arrived.  Windy also included a little bit about after the Family's arrival. 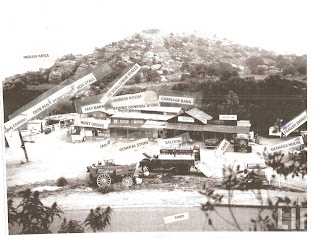 "OK, LOOK AT THE photo I have attached. This was it. No road covered with trees, no bungalows or whatever they were supposed to be. One of the guys, either Larry or Ben slept in the jail. It had a bunk, dresser, nite stand and a place to hang his clothes. It looked just like a cell in the old towns. It had a desk for the sheriff and places to hang guns, hats wanted posters, etc. during the day the jail was open to visitors but the cell was locked. It had electric lights etc. Now the general store was always locked but had posters of stuff you could have bought if it were a real town. The saloon was open for visitors but didn’t sell nothing. People could go in and sit and bring a picnic lunch if they wanted, we did sell soda. The café had an adjoining door and could also be used by visitors but we didn’t use it ourselves unless we were having a party with outsiders. We cooked and ate at the table in Georges house. YOU went up the steps and into the living room. To the right was Pearl's Room - always kept locked, and to the left was the area where the table set with the kitchen beyond that with a open divider and on the back wall was George's room. In the living room on the back wall was a beautiful marble mantle hand carved with colored marble animals. Near that sat George's chair. He sat there all the time with a little dog. At the far end of the living room (it wasn’t real large) was a couch and a couple overstuffed chairs. Under George's house (as you were facing it) to the right were steps going down (rather steep) turn left and there was the bathroom and next to it a shower. (the only one on the whole place except down at the lower ranch house. Both places (I believe) were connected to cisterns for water.

Now the reason the general store was locked: you could enter it from behind through the harness shop and it had been divided into several small private rooms each with a bed, dresser, chair and closet. The men decorated to suit themselves. There was also a storage room off the saloon and it too was a room for a man (or a woman) the same with the café, it was a pantry I guess. There were times when all the rooms were full. When we all lived there, we kept the mountains clean and had no near fires. It took a crew to run horses to graze each spring. We grazed the entire area off until there was no fire danger. Manson’s crew caused the fires because no one would stay there to work.

There were some trees leading down the road to the lower ranch house and the outlaw shacks. We had electricity there and running water. But there were no flowers to pick or hardly anywhere to run around like they showed. There was no water fall at Spahn’s ranch. They would have to cross over and go down into Devil’s Canyon. That was on the other side of the road.

Actually, never saw the older kids much, I believe they kept them out of site, as they didn’t go to school, doctors, etc. I usually just saw the babies laying on blankets out in front of Spahn's house., Cold or not they would be naked. Sometimes a half a dozen or more. I covered them up and Charlie would have a fit. He said they’d grow up strong and never feel the cold if started that way (he had on a jacket off course).. I said they’d probably die of pneumonia. I still believe some did.

There were a lot more people staying there than they show in any book, movie or magazine. A lot of them were probably runaways and stayed hidden. I would see half dressed pregnant girls down by the shacks and the lower house that I never saw up top.

The dancing and partying they showed could have been in the saloon or café although neither were very large. The room they showed didn’t exist. Neither did the rooms or the beds or the cleanliness of it all. There were no laundry facilities. The shower under Georges house was mainly cold because we couldn’t keep the hot water tank working. Sometimes it did and we’d all rush to take a warm shower. Lots of times it was just was in a bowl with heated water from the stove. They generally wore those long dresses that the hippies made popular, and it seemed they all had greasy hair. Or the girls ran around with no bras, tank tops shorts so short they might as well have been naked, boobs showing etc. Most of the men ended up looking the same. Hair a mess and stubble or beards, again half naked most of the time."