Another Epix offering. A docuseries beginning Sunday, May 31. 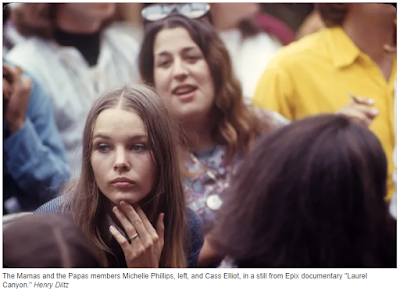 'Laurel Canyon': Mamas and the Papas singer on the 'very big highs and lows' of '60s music scene
Patrick Ryan
USA TODAY/ May 29 2020

Imagine living right down the street from Joni Mitchell, The Byrds and Modern Folk Quartet.

Those were just a few of Michelle Phillips' famous neighbors in Los Angeles' Laurel Canyon in the late 1960s and early '70s, where she co-founded folk group The Mamas and the Papas with then-husband John Phillips, Denny Doherty and Cass Elliot.

"Cass had an open-door policy – anybody could swing by her place any time," Phillips says. "They'd smoke a joint, drink some wine and play their guitars. That's how she got Crosby, Stills & Nash together: She heard them all singing (separately) and said, 'You guys should sing together.' And that's how that happened."

The Mamas and the Papas members Michelle Phillips, left, and Cass Elliot, in a still from Epix documentary "Laurel Canyon."
The musical renaissance that sprung out of this idyllic mountainside neighborhood is the subject of two-part docuseries "Laurel Canyon," premiering on Epix Sunday (9 EDT/PDT) and concluding June 7. The documentary paints an intimate portrait of the friendships, love affairs, collaborations – and sometimes all three – that defined this place and time.

More:'David Crosby: Remember My Name' reveals a musician trapped in his own kind of hell

Graham Nash, for instance, wrote the wistful "Our House" at Mitchell's Laurel Canyon home, which the then-couple shared. The Doors were the house band at nearby nightclub Whiskey A Go Go before they hit big, and Peter Tork was roommates with Stephen Stills pre-The Monkees fame. (In fact, it was Stills who helped get him the gig.)

"What was so unique about Laurel Canyon at that time was just how many of the artists who were there became really influential musicians – it's the music of our lives even still to this day," director Alison Ellwood says. "It was a really fun process of discovery, finding the myriad ways these artists connected and interacted with each other." 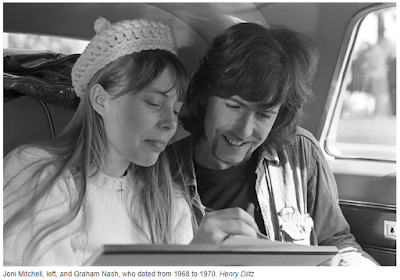 The docuseries features a slew of new interviews with artists who called the community home, including Jackson Browne, Don Henley, Linda Ronstadt and Bonnie Raitt. It also features never-before-seen images from photographers Henry Diltz and Nurit Wilde, and home footage and recordings from some musicians' personal archives.

Phillips, now the last-living member of The Mamas and the Papas, is featured prominently throughout the documentary. She recalls the night John woke her up to write the band's now-signature hit "California Dreamin'," which came to him in his sleep. She also gets candid about their tumultuous relationship, when he temporarily kicked her out of the group shortly after they separated, upon learning she was dating The Byrds' Gene Clark.

"It was a really fun time, but all very dramatic, with very big highs and lows," says Phillips, 75, who transitioned into acting in the early '70s.

She prefers not to discuss Charles Manson, an aspiring rocker-turned-cult leader who attended at least one party at Elliot's house before orchestrating the murders of actress Sharon Tate and six others in 1969. ("Even after all this time, it just makes me want to cry," Phillips says.) The singer gets similarly emotional talking about Elliot, fondly known as "Mama Cass," who died of heart failure in 1974 at just 32.

"It was a huge loss for everybody," Phillips says. "She had such a stage presence. So funny and quick on her feet. She always had the audience in the palm of her hand." 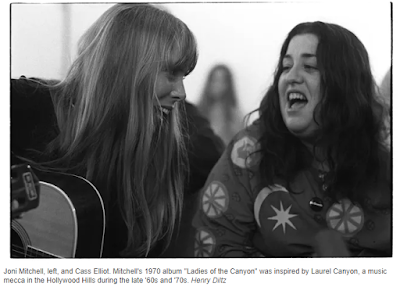 Joni Mitchell, left, and Cass Elliot. Mitchell's 1970 album "Ladies of the Canyon" was inspired by Laurel Canyon, a music mecca in the Hollywood Hills during the late '60s and '70s.

The Mamas and the Papas were together for only 2½ years, but left an indelible mark on folk music in a short amount of time. In addition to "California Dreamin'," which has been streamed nearly 240 million times on Spotify, they scored Top 5 hits on the Billboard Hot 100 chart including "Monday, Monday," "Creeque Alley" and "Dedicated to the One I Love." And in 1998, the band was inducted into the Rock and Roll Hall of Fame.

"I would never have become a singer if it hadn't been for John," Phillips says. "Really, all I wanted to do was dress up in a cute cocktail dress, put my hair up, drink a Brandy Alexander, have a Marlboro, and be the bandleader's girlfriend. That's what I thought I had in front of me."
Posted by DebS at 6:36:00 PM 88 comments