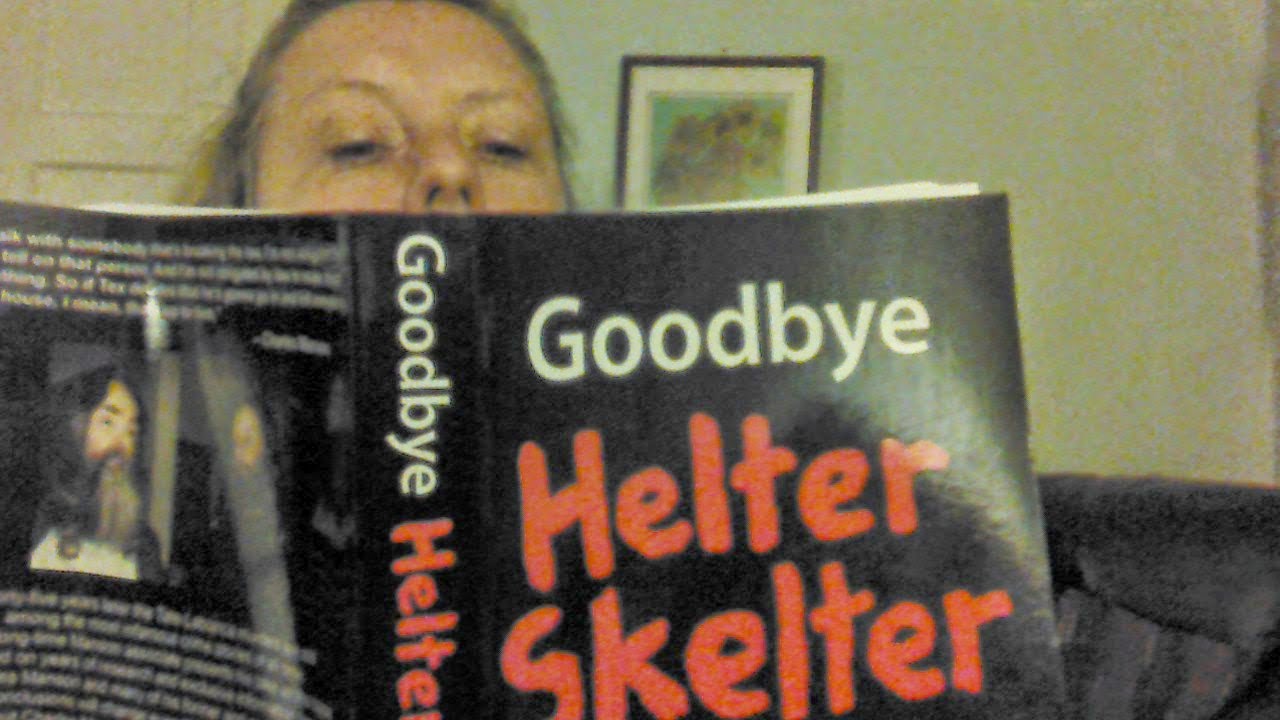 Patty's book report on Goodbye Helter Skelter is coming to a close. She hopes that you have enjoyed it. Though Patty certainly does not agree with everything that George has written, she appreciates the opportunity to have read it, thought about it, and discussed it with the author.  Thank you, George, for your openness to enriching this experience.

The point of this chapter is to discuss what has happened to each convicted "Family member" since the trial: how their attitudes toward Charlie have changed and how Charlie is said to harbor no ill will towards any of them. Of Charlie, Stimson demonstrates that he has no desire nor illusions of being paroled. Charlie feels that we on the outside are the crooks who lie and cheat all the time. Also, he wants to be with "all the people that I came in with." Of a new trial, he does not want one for himself, but rather in order to uphold the sixth amendment for the good of the people.

Tex fought extradition to California long enough to have a trial separate from the others. Charlie says that he's a momma's boy, but kept his word, and did what he was supposed to do. Susan became a born again Christian in 1974 and lambasted Guns N Roses for recording Look at your Game Girl. Charlie says "I'm glad that she's got whatever she can get." Pat (Yellow) says that she was manipulated by Charlie while under the influence of drugs and that nothing was ever done at the ranch without Charlie's express permission. Charlie says that she has lied multiple times on TV but that he will not judge her. Leslie ("mean" Green) was granted bail for six months between 1977 and 1978. She said that Charlie became progressively more physically and verbally abusive of her during her time at Spahn, and even told her that she would die if she left him. She resents his dishonesty for not assuming his part of the blame for what happened. Charlie says that "I love her no matter what...She's not wrong in what she's saying...we can't look down at her like she's wrong because we can't see what she's looking at."

Bruce recounts a time in 1973 when he sat next to Charlie on a bus ride to Los Angeles. He remembers that "he was just carrying on as if nothing had happened." Bruce remembers thinking that "something's terribly wrong here." Bruce was denied parole twice at the time of this book's printing because, as Governor Jerry Brown wrote, "It is clear that he continues to withhold information about these events." Bobby Beausoleil has never overtly denounced Charlie, but says that "there is no love lost" between  them. He claims that he was never a "member" of the "Family" and has always supported the idea that the later murders were a reaction to the Hinman murder. Charlie says of Bobby and Bruce that he always tried to help them, that he took care of them by paying their bills and their rent. He says that Bobby always wanted to be Charlie, that Charlie was always trying to save his ass. Bobby has never responded to any of Charlie's letters. Steve Grogan is the only killer to have been released, presumably because he gave up the location of Shea's body, because he was only 16 at the time of the crimes, and because he developed increased empathy for his victim after having been stabbed in prison by Nuestra Familia. He says that at 16, he was easily manipulated. Charlie says that he pulled Steve out of the trash can, and never told him what he could or could not do.

The chapter wraps up with Charlie's observations about why everyone turned against him: because they were made to believe that if they did not, then they would never get released from prison. They have had to justify in their own minds why they believe that Charlie was to blame. They do not want to speak with Charlie because they are afraid of what they are thinking about themselves. Charlie says his only crime is that he did "mean" things to people who misused his friends: if you misuse his friends, then you misuse Charlie. He does not feel that he ever made a mistake because in his world, if you make a mistake, then you're gone. He says he fell down only when he was standing upon the words of others.

Stimson offers up some analysis about who Charlie truly is. He begins with who he is not: he is not impressed by Scientology, the Process Church, or other organized religions. He is not a satanist. He does believe in the concept of God, however: "God is everywhere. God is nobody...he's all of us." Christ, he says, was a prophet: but does Charlie see himself as a prophet as well? "I was a servant to God...whatever God is. It's just a word." Does he believe that God and the devil are the same thing? "An intelligent man knows that God and the devil are his own interpretation...I am God, I am the devil within my own existence and my understanding of both."

Then Stimson broaches the topic of whether or not Charlie views Adolf Hitler as a hero? "He was a good man." Apparently Charlie admires the order that Hitler tried to bring to Germany. And it seems that he approves of the Nazi party though not the American white power movement: "The American Nazi party is the worst thing that ever happened to the Nazi party...a bunch of fat, sloppy, fucking assholes." On racism, Stimson concedes that Charlie IS a racist but that he has no hate for any race in particular rather, "I hate all white people. White people are rotten. And black people are just like 'em.  Because you've made em just exactly like you...they want to be you...why couldn't they be left to God? In the jungle they were God."

What had the most influence over Charlie, as with most of us, were his early years. Charlie says that he ruined his mothers life, and in exchange she was horribly cruel to him both emotionally and physically. He confirms the familiar story of how Kathleen sold him for a pitcher of beer, how she drank a lot, and how she hustled men for money (though, Stimson insists, she was NOT a prostitute). Nevertheless Charlie says that he respected and liked her, that what she did to him made him strong. His wife Rosalie also influenced his personality in that after Charlie was put into prison for stealing a car, Rosalie went off, slept with his friends, and eventually divorced him. "I believed if you got married to somebody...that we would, uh, till death do us part, and all that...And I held my way. I held my loyalness. And she went off down the road...and I just went crazy... I guess that's what we call 'jealousy'." Stimson claims that these events did not make him hate women but that he retains an old fashioned view on the relationship between men and women: "Male is the creator. Woman receives the creation from man. She's a receptacle, a receiver."At the end of this section, Charlie's grandparents and Uncle Luther are also mentioned.

Next, Stimson talks about prison and people that Charlie met there along the way. Charlie recounts a very long list of the institutions he has been in: Father Gibault's, White's Institute, juvenile hall, Boys' Town (Father Flannigan's); Danville, IL; Plainfield, IN; Salt Lake City, "federal joints," Natural Bridge in Washington DC; Petersburg VA and Lewisburg, PA among others. Because of this, he says he never got to do the normal things people do in life. He was often beaten: "When I would get up from there I would feel like - I would be relieved. I'd feel stronger and better."  In prison, he learned from "the old Italians" to not snitch, to fight and to mind your own business. At Terminal Island he saw a man killed in the kitchen, then butchered so that he would fit in the trash cans. "People getting killed around me is no new thing...when you live a life like that, it becomes a natural thing."

Everything, Charlie has learned, runs on favors. It does not matter if you think the favor is right or wrong, you just do it.  Prison runs on the enforcement of rules: the inmates follow them as do the guards, many of whom were previously servicemen. "War," Charlie says, "is a word you use when someone is coming to kill you....it has nothing to do with...what you think is right or wrong." Similarly, the idea of brotherhood is very important to Charlie because he has been in institutions all his life, where he was raised in a "collective mind," where your opinions and decisions are not your own. Many of these institutions were run by clergy, who are a brotherhood. Charlie thinks very highly of veterans, a brotherhood who sacrificed their lives for him. He says that decisions that were made at the ranch were not his, they belonged to the group, to the men there. That is what he learned in prison, to make decisions for the good of the brotherhood, not just for himself.

Why he is seen as a leader is puzzling to him. Stimson says that Charlie is a natural leader: he is charismatic, enthusiastic, and confident. He was 10-15 years older than the others at the Ranch, and he took an interest in people and their problems: for instance, many of his friends needed a place to live, so he provided that for them. Charlie continues to claim that he did not tell people WHAT to do, but rather told them what they COULD do. He does not want people to know him, he wants them to know themselves: "what you see in me is you." He is aware that media interviews are not impartial, so he has adapted to that situation.  The media will pounce on anything negative or crazy, so that is what he gives them: in fact, he likes to play them. He does not care if he is misinterpreted: "it's got nothing to do with me personally." Stimson feels that the public reaction to his persona, while superficially entertaining, it is unfortunate and a misdirection of Charlies energy and potential: he has so much more to offer the world than a series of performances. When he has said this to Charlie, he has simply responded by saying, "how would you play it?"

In the final analysis, Stimson writes that had he severed himself from the trial of his co-defendants, he would have been given a much lighter sentence. However, he stood by his friends. Stimson finds him to be nothing if not consistent in the way he describes the events of the Summer of 69, and therefore credible. He is brilliant in many regards, though deficient in others. He is both ill tempered and negative, but also good humored and full of enthusiasm. "That he has survived this long is a testament to his integrity." Condemnation of him is easy, but it is more interesting and fulfilling to try and understand him as a person. It has made Stimson a better person, he writes. He can be a bad guy, but he can also be a good guy: "As such, I can't consider him to be anything like an icon of evil. Instead, I consider him to be an icon of humanity."