Who Was Driving the White Sports Car

On the second night of the murders, August 9th, the killers drove randomly around Los Angeles looking for victims before settling on Harold True's former neighbors, Leno and Rosemary LaBianca. During their journeys they encountered a white sports car
_____

Observing a white sports car ahead of them, Manson told Linda, “At the next red light, pull up beside it. I’m going to kill the driver.” Linda pulled up next to the car, but just as Manson jumped out, the light changed to green and the sports car zoomed away. Another potential victim, unaware to this day how close to death he had come.

A: Linda Kasabian: Driving for quite a while and got into intersection lights. There was a white sports car driving down the road and Charles told me to follow it.
Q: Was this on Sunset Boulevard?
A: Yes.
Q: What direction were you going at this time?
A: Back toward the city, away.
Q: You were going away from the ocean?
A: Yes.
Q: Going east?
A: Yes. And he told me to follow the white sports car, and at the next red light to stop and he was going to get out and kill the man and I got to a red stop and stopped and the car was right there beside me and Charlie started to get out, but then the light turned green and the car took off.
Charlie got back in and then I kept driving and he started giving me more directions and finally we ended up in front of a house where I had been a year or so earlier.
Q: What house was this?
A: Harold True.

Who was driving that car?

According to Jerry West, it may have been him. 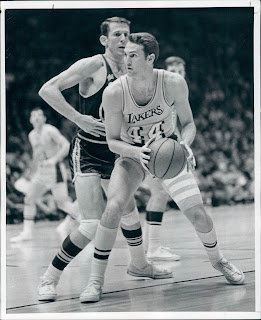 Outside of the fact that they both spent time living in West Virginia when they were younger, you probably wouldn't think that NBA legend Jerry West and convicted killer Charles Manson have all that much in common. But during a new interview for In Depth With Graham Bensinger, which will air this weekend, West talks about the strange connection that he shares with Manson, who is currently serving a life sentence behind bars.

In the 1974 book, Helter Skelter: The True Story of The Manson Murders, authors Vincent Bugliosi and Curt Gentry wrote about the murders that Manson and the Manson family committed back in the 1960s and 1970s. They also wrote about one night in particular when Manson followed a white Ferrari down Sunset Boulevard. And while speaking with Graham Bensinger, West reveals that he thinks he was driving the Ferrari that was followed by Manson. He can't say it for sure, but he has his suspicions.

"Oh my gosh. You know, he's from West Virginia also," West says in the interview (you can watch the preview clip here). "And I had a Ferrari, and again, I have no idea, but it mentioned in the book, Helter Skelter, how he followed this Ferrari on Sunset Boulevard. And this car was following me, okay? No question, it was following me…And it was the most, weird feeling of all because these other murders had occurred that he was a part of...I often wonder, because he said he was following this white Ferrari…"

"You think it was you?" Bensinger asks.

"I don't know," West replies, "but I know one thing—he wasn't going to catch me in a Ferrari."
If this is actually true (unfortunately, there's probably no way we'll ever know the truth), how crazy is that?!

Was it Jerry West? I've never heard the car described as a Ferrari. Who knows, but that would be pretty crazy.