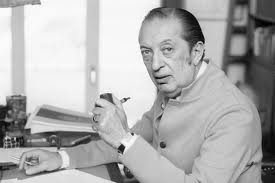 Hans Habe was born of János Békessy on 12 February 1911 in Budapest.

He was the son of  tabloid newspaper publisher Imre Békessy (I have read that he had a reputation of being quite shady).

Hans lived in Vienna until 1926, when Karl Kraus initiated an extortion scandal against his father.

The son studied German language and literature at Heidelberg and found his first position as a reporter for newspapers in Vienna.

He edited army newspapers and sympathized temporarily with the Austrian fascists.

His early career was quite successful, and he was the first to discover Adolf Hitler's origins and real name, Schicklgruber.

Beginning in 1934, Habe was the League of Nations correspondent for the Neue Wiener Journal and the Prager Tageblatt. In 1936 he published Drei über die Grenze (Three over the Frontier ), described as an "exile novel of a nonexile."

Expatriated from Austria, Habe served as a volunteer in the French army in 1939-40, became a German POW, and in 1940 escaped to the United States.

His successful war novel A Thousand Shall Fall (Ob Tausend fallen ) was published in the United States in 1941.

After being trained as a defense officer in the U.S. Army, Habe was promoted to major and was assigned to serve as a member of the American committee to establish a democratic press in defeated Germany. His most important achievement was the founding of the Munich newspaper Die Neue Zeitung.

In his not entirely reliable report Im Jahre Null: Ein Beitrag zur Geschichte der deutschen Presse (1966), on the history of the German press, he characterized the attitude of the American occupying forces as "anti-German" and "pro-Russian" and claimed to have repeatedly warned the United States of the communist danger.

Habe published successfully as a novelist in the United States, with his works reflecting his personal experiences. The novel Aftermath (1948) portrays the end of the war and postwar period and criticizes the emancipated American woman.

Off Limits (1954) relates stories surrounding the American occupation of Germany. Black Earth (1952) depicts the fight of farmers in Hungary against the Soviet influence on domestic agricultural policies.

His attempt to publish the magazines Neue Münchner Illustrierte and Echo der Woche in Munich failed, and Habe's journalistic career ended in 1954.

With more than 40 publications to his credit, however, Habe established a reputation as a best-selling novelist.

From the 1960s on, calling himself an "extremist of the center," he openly opposed left-wing and liberal authors such as Max Frisch and Rolf Hochhuth in Welt am Sonntag.

In the same vein he argued against the antireader and antimoral avant-garde, the nouveau roman, and the so-called nonrepresentational novel.

Throughout his career he remained a pugnacious defender of his own interests and opinions. He sued the magazine Stern in 1952 for the publication of details of his private life, and he brought politically motivated suits against others, for example, in the charges made against Friedrich Dürrenmatt in 1972.

Habe died on 29 September 1977 in Locarno, Switzerland. You're only one in a million, so why bother to speak up, to get involved, to commit yourself? German author Hans Habe answers this way: "The world is one percent good, one percent bad, and 98 percent neutral, and this is why what individuals do is important".

Patty Montgomery: Heard this one before? 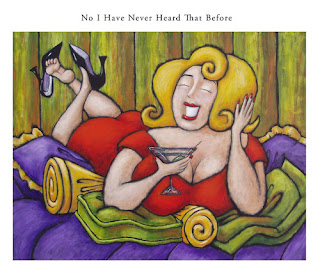 Last night while listening to Brian Davis' excellent radio show, Patty could not help but wonder where she'd heard Patty (Krenwinkel) Montgomery being a friend of Bill Garretson's before? Is this really "new," she thought? Well, no, it's not. A quick Google search this morning yielded the following:

http://2ndofficialtate-labiancamurdersblog.blogspot.com/2009/06/katie-enigmapart-iii-bthe-psychological.html
Commenter "Courtney" says in 2009: "I've always thought the dogs there were used to her anyway - I think she was the Patty Montgomery who stayed with Garretson for a while. Manson's scout."

And here:
http://truthontatelabianca.com/threads/crime-scene-and-autopsy-graphic.2789/page-7
Commenter "damfino" says in 2009: "I haven't seen this discussed anywhere, and I've been wondering: what are the chances Patty Montgomery is really Patricia Krenwinkel?  When I saw that name in the transcript, I kinda off-handedly went "Gee, Patty is short for Patricia, and Montgomery is close to Mobile" but didn't think anything more of it.  So it really startled me when a couple of days later I read that the fake name Krenwinkel gave when she was arrested in Mobile was Marnie Montgomery.  (Apparently Tex used Montgomery as an alias too?)  It's probably still just a coincidence, but I had to ask."

and here: http://truthontatelabianca.com/threads/maybe.1211/page-2
commenter "Courtney" says in 2008: "Also he said the girls name who used to come to Guest House was none than Patty Montgomery - Patty? Watson's nom de plumb - Montegomery - coincidence - as Jung says "There are no coincidence only significations"

Patty's take: Maybe this bit of information is important, and maybe it's not. But it's not "new." We should all keep trying though because "The Truth" IS out there somewhere. 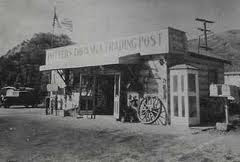 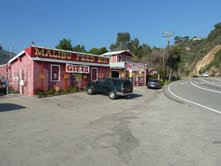 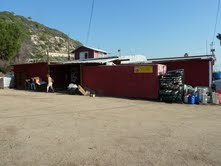 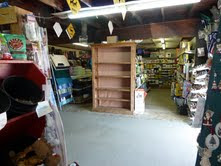 The Malibu Feed Bin sits next door to where Sadie, Linda and Clem went after leaving Saladin Nader's apartment. Charlie was friends with the owner and would park his bus here sometimes. Charlie & company may of painted the bus black at this location, not sure though.