Austin Ann is back from retirement, and ready for action! Family apologists.....so sorry, but you will probably hate me. For everyone else, Hola, ¿cómo estás? Moving on, we have a Manson (Barker Ranch era) guitar up for auction, if anyone is interested in throwing away an extra $10,000 to $15,000 for this historical piece of melody making kindling. Imagine.... being in death valley on a cold, windy night...frazzled & worn, hungry, thirsty, dusty & itchy, barefoot, sunburnt, and having to sit for hours on end listening to Manson's crazy crooning all night long! I don't even think "Look At Your Game, Girl" sounded as good as a hamburger sizzling on a grill at a 24 hour diner, which half of the morons out there were probably thinking of as he was doing his hourly yodeling.....But, as I have always said, "to each their own." Thank you, and have a good day....... 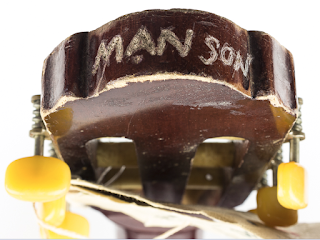 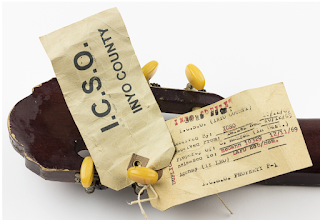 Here is the paragraph pertaining to this item:

CHARLES MANSON (b. 1934) Drifter whose "family" committed the infamous Tate-LaBianca murders in 1969. An outstanding, unique Manson relic, a dreadnought-style acoustic guitar owned and used by Manson at the Barker Ranch and seized by police following the killer's arrest. The guitar, 39" x 14 1/2", is a model ACL-IM manufactured in Japan by Camco. Manson has carved his surname into the top of the headstock. Attached to a tuning peg is a pair of property labels from the Inyo County, California Sherriff's Department, with one indicating that the guitar was seized from the Barker Ranch in Death Valley on October 12, 1969, the day of the raid on the ranch which resulted in the capture of Manson and his "family". The tag further notes that on Dec. 11, the guitar was transferred to the custody of LAPD detective Michael McGann, who investigated the assassination Robert F. Kennedy before becoming the lead detective working on the Tate murders. Before his capture, Manson had been an aspiring folk musician and in an effort to promote his career, he befriended Beach Boys drummer Dennis Wilson in 1968. This guitar was undoubtedly used by Manson to compose, practice, and likely record his music, as well as to entertain his 'Family' members at the Barker Ranch. Many speculate that the real target of Manson's rage was record producer Terry Melcher, who had refused to sign Manson and had earlier rented the home occupied by Sharon Tate and Roman Polanski. The guitar is unstrung, and shows small nicks, chips, dents, and scratches throughout, else very good.
Estimate $ 10,000-15,000