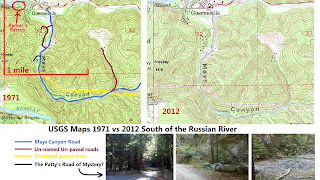 Being driven by minutia and trivia I thought some geographic analysis of Guerneville was in order.  After all, California has experienced a blossoming population growth since the end of WWII and many things have changed in a few years.  I gave up trying to convince some younger types that Disneyland was once surrounded by orange groves and Knott's Berry Farm had free admission.  Suggesting what travel was like when Nevada had no speed limits and the Interstate system was just oddly scattered fragments of road, places me in the category of liar or overdue to be processed into some sort of gasoline.  But I'm comfortable with it.

Thanks to the miracle of the internet a person can make a virtual time machine and see into the past.  Well at least on a map.  The USGS has a site that one can download historical maps from various years.  These maps are extremely detailed and include roads, trails and building footprints to name a few features.  So what did Guerneville look like 40 years ago you ask?  Astonishingly similar to today's representation by comparing the same area side by side in the attached file.

This area is over one and a half square miles of terrain south of Guerneville.  This 'should' enclose the murder site of James Willett, if the news articles were remotely accurate.  Virtually every feature on the 1971 map is identical to the modern version today.  One can see the same road network, structures and infrastructure which 'should' limit errors and extra assumptions.

The articles variously called the gravesite an 'old road' and 'trail' about half a mile south of town.  The only road which could meet such a description is Mays Canyon Road which is outlined in blue on the 1971 chart.  Circled in red is the location of Parker's Resort which is on the northwest corner of a square mile section outlined in red to give a sense of distance and scale.

The magenta lines represent un-improved roads which could be characterized as 'old roads' perhaps.  The black squares represent structures which could be storage sheds, garages or occupied dwellings.  This is a resort area and the Willetts and 'friends' were there in the beginning of the off season when the overall population was likely at a low, along with the prices for accommodations.

The only other thing I could imagine being described as an old road or trail could be the easement cut for the power lines which is marked in yellow.  These are the sort of things that easily pass through our visual filters since they are so commonplace, even in the middle of wilderness areas.  This is pure guessing on my part and has been associated with zero reports or articles.

Adding to the possibilities is the road Panamint and Beef Patty researched which appears to lie between the power line and the second unpaved road on Mays Canyon Rd.  Considering the number of structures associated with the other roads would make them less likely, but the actions of Monfort have rarely aligned with intelligence or thought.

The bright yellow 'pipe gate' has a BLM and Forest Service look to it along with the oddly placed 'Jersey barriers' indicate this is the hand of your government hard at work where Patty took her photo.  The fact that trails and water tanks are mapped religiously by the USGS and this road being missed is quite the find and a reflection of the attention to detail which Panamint and company have given this subject.  I for one am impressed and believe the area identified on the blog is an extremely good fit to the description.  At least I can't find many other options.