Time is Irrelevant to Me - December 1969 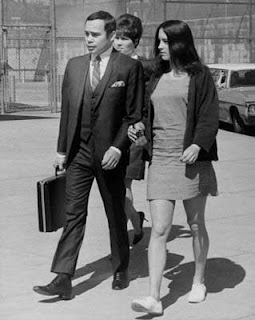 Susan Atkins served a life sentence. I see how she arrived there but believe she died in the right place at sixty-one years old. She went too far too many times.

But what about once the killers are locked away? Are they allowed to retain their humanity after taking part in despicable deeds? Is redemption ever possible? Does empathy remain forbidden after they're dead? We're arguing all of that lately on this blog.

Issues pop up before a debate can begin. How do we qualify "despicable?" I'm squeamish and won't touch certain cases on my dark travels. My despicable might arrive sooner than another reader's. Etc.

For a starting point today, let's assume we all consider using a knife to murder a terrified pregnant woman after she watches her friends die and pleads for her unborn child's life a despicable act.

Calling out for her mother as she passes. Shame on you.

When I read blog comments during the weeks we talk about the inmates, I notice two groups. First, people advocating across the board transparency and fairness in parole processes. Something that shows a human life is not the possession of some political overlord or overlords. I completely agree with this camp. Every California inmate should live under the same sentences and rules for release.

The opposition here is like are you nuts? Look what they did. F-them.

I'd be lying if I said I didn't have a foot on either side of that line.

Our reference materials for this discussion are provided by cielodrive.com. Thank you, kindly.

Tex Watson is arrested November 30th in Texas. Police catch up with Patricia Krenwinkel in Mobile the following day. Back in Los Angeles, Paul Caruso and Richard Caballero are interviewing their new client, Susan Denise Atkins, when the net drops on Krenwinkel two thousand miles away.

The last part is possibly not accurate but I see it that way when I'm at my storyboard. Starsky and Hutch music plays in the background. "Police! Freeze!"

- Here is a link to my blog colleague David's excellent write up on Paul Caruso with a comment from Caruso's son below the post.

Other writers believe Caruso was a mafia lawyer sent to cement a narrative into place. I'm interested in every side of that argument. What are your thoughts?

Honkeys like me from Honkeyville possibly needed several decades to realize Caballero isn't an Italian name, and that's okay. There's no judgement when you ride with me. We can be hillbillies together forever.

Circling back to my original question, let's look at Susan Atkins. She was at Hinman, Cielo, and Waverley (kinda). No one but Charlie visited more murder scenes.

Reading Sadie's comments and testimony about her time with Sharon before Sharon died made me emotional. The photo of Atkins as a young girl standing in front of her father's car also remains burned into my brain. Maybe that's what keeps me coming back here. So many whys.

Several statements in the above transcripts are heartbreaking. Other times, I laughed. Stop Talking was an alternative title I considered for this piece.

"Helter Skelter" is not discussed during the interview with the lawyers, but joins the story four days later in front of the GJ (Grand Jury). 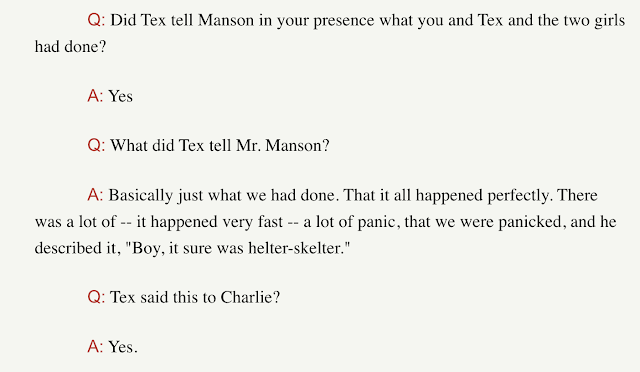 Susan is speaking the language of her peers at Spahn's while addressing the GJ. She even rhymes her words at one point. Head and dead. Not a lot of smart in that gal at times. Watch Hendrickson on Youtube or any of the courthouse footage for verification on the group speak.

Let's pause on the creepy crawls for a second. What are your thoughts on their genesis? Who was the first person saying hey let's go creepy crawling?

Me if fam members asked me to go creepy crawling with them late at night: Omg I just got back from the A&P dumpsters. I wanna watch Clem's fire ritual. 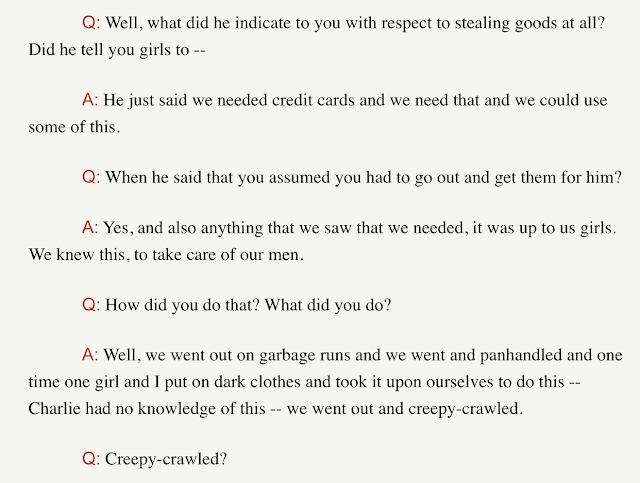 That's December 5, 1969. Friday. Four days earlier prior to a dinner plus ice cream, Atkins said this:

Two somewhat different scenarios. Sustenance and fear games. I spent an afternoon making a list of contradictions I found in the documents but stopped when my friend said:

"Could be discrepancies or coaching. You would have to have a think about why the latter makes Tex/Manson look more culpable or if that was just her being ditzy."

Let's hop in on some omg and wtf moments from the first week of December 1969. A third title for this episode could be How to Doom Yourself to the Fullest. 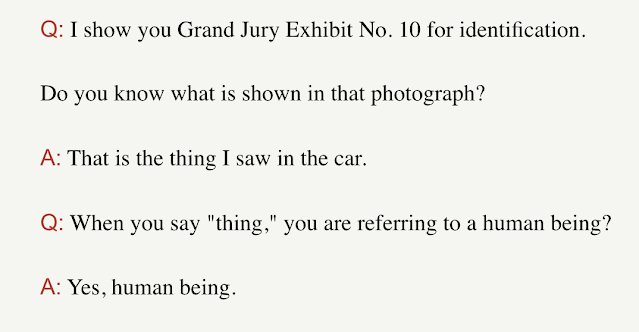 *Judges scribble deductions on their scorecards

Ah, the Infinite. Please go on.

I followed up with my secret sources inside the CIA. Within minutes, they verified Sadie missed Climbing Residential Fences (CRF) day at CIA Assassins School. By the time she returned from a nasty bout of stomach flu, the class had jumped forward to Residential Kitchen Infiltration (RKI). 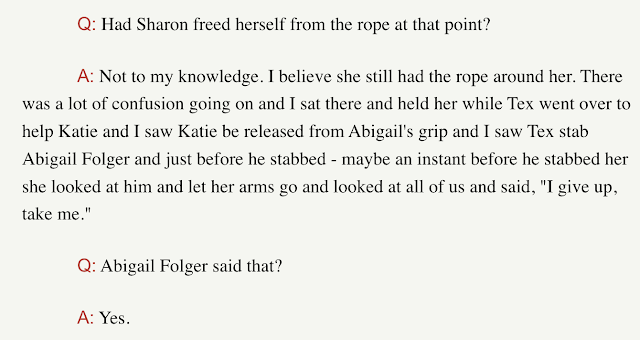 Not sure why anyone would come clean about the following impulse but she says it in both documents. 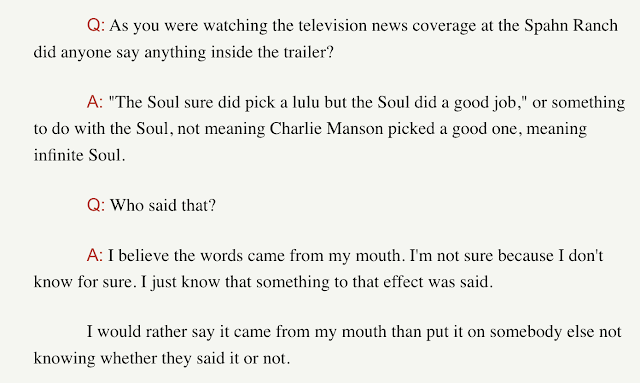 LaBianca instructions overheard from the seatless back seat of Johnny Swartz's car.

A possible moment of Bugliosi speaking through Sadie's mouth or the infinite or whatever. 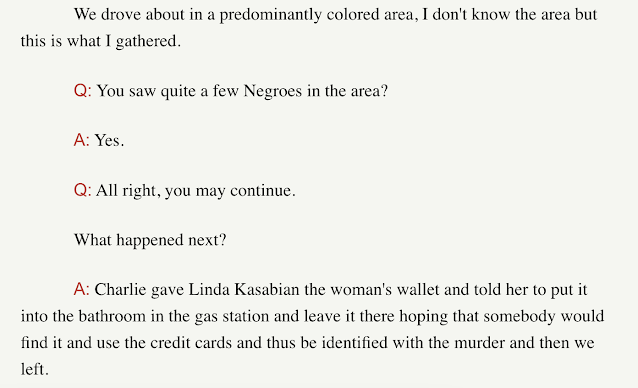 Life at Spahn's as told to the GJ. 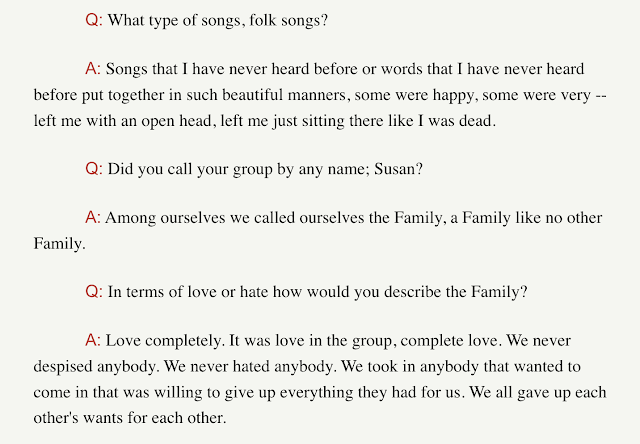 She should've stayed with Caruso and Caballero. Either way, Susan Atkins is gone. Have you forgiven her since she served her sentence, or is forgiveness something that will never happen?