Somebody was having fun with a "source" for the Los Angeles Sheriff's Department and I bet it wasn't a seasoned source from one of the alphabet agencies.

The officers advised that they had received information from a confidential source the members of the Satans Slaves, Hells Angels, and Galloping Gooses were presently living at Spahn Movie Ranch, Santa Susana Road, Chatsworth. These persons are reportedly in possession of a .50 caliber machine gun, along with a number of cases of dynamite. The source also stated that the dynamite is wired to a large amount of marijuana that is buried on the Ranch property. The exact location of the machine gun, dynamite, and marijuana is unknown. The Spahn Movie Ranch encompasses several hundred acres of land.

The Los Angeles Police Department Division verified that there were several members of the various clubs living at Spahn Ranch, also that two clips of .30 caliber ammunition have been found in the Spahn Movie Ranch area.

This writer has had reports of members of various clubs staying at the ranch, also Malibu Station has made some arrests at the ranch including an Assault With Deadly Weapon arrest reported under file 469-00721-1071-055.

The Devonshire Division officers will forward any further information, as it is received.

Sergeant Stern, Intelligence Bureau, was contacted and notified of the above. Sergeant Stern has previously received the same information from another source. 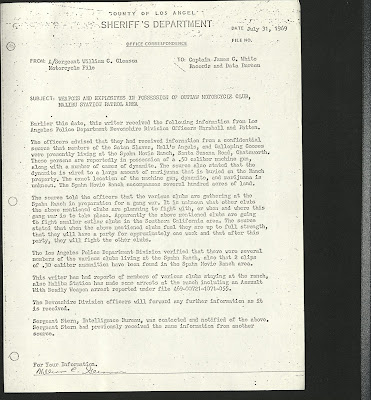