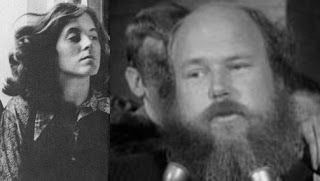 It sure seems like just another normal day at Spahn's Ranch, but then what's considered normal at the Manson Family's commune in Chatsworth, California? Again, I'm driving up old Santa Susana Pass Road to do some more filming at the "commune"! But where does the word "commune" fit into the more proper label of gang-hangout? The young gangsters, that inhabit the old run-down western movie set, don't grow any vegetables there. They don't even grow their marijuana there. And the mind-blowing Belladonna-used to get someone to NOW - grows wild all around their Death Valley home commonly know as the Barker Ranch. No, these media labeled Hippies, shop at the supermarket just like all civilized beings-except they use the pick-up dock at the back of the store where the food is actually FREE. And "run-down old western movie set," just what is a Western town movie set supposed to look like? A Universal City amusement park with buildings two or more stories tall?

The point being, maybe all these little media misconceptions add up to a totally distorted "big picture" of the notorious Manson Family. Instead of listening to so many third-party stories, come along with me to a place where the real under-world meets "middle class" society and where "no sense makes sense."

"Good morning, my favorite actors, what's up for today" my greeting would sing out. "We've got to get Brenda to the LA free-clinic, right away" was their urgent response. Oh shit, "this doesn't sound like fun" was my immediate thought. "She's got to get her blood tested" Gypsy explained. I'm sure my responsive expression was a clear "Is it contagious"?

Gypsy quickly reversed a negative to a positive - "Brenda's gonna get married and she has to have a blood test, to get a marriage license. "But what's the hurry" I said. The girls all began to chatter, but I did recognize, "the wedding is this weekend."

Of course, now the big question is: "Who's the lucky guy and why this weekend"?

"Ron, the lawyer" - and with her trademark sheepish grin - Gypsy continued: "Mr. Hughes is going to marry Brenda and that way she will be emancipated and won't have to go back to her parents." I don't know why (there's already been massacres, missing bodies, etc) but Leslie Van Houten's attorney marrying one of the Manson Family's junior gangsters struck me kinda funny.

"Hey, do I get to film the wedding"? drooled from my wicked lips? Stares like I don't know what suddenly made the rounds. Oops, say what? Did I miss something? Then the girls all chimed in. "Sure, but you'll need lots of cameras" said one. "And there'll be a feast too," quipped another. Then, I noticed Squeaky's priceless expression of "What's going on"? But before I knew it, Brenda's rather simple legal remedy for not being ordered by the court (she was under aged) to be returned home, was turning into the wedding event of the season.

"Gee," I thought, "Will they invite ALL the lawyers and what about the Judge"? And what about Ronald Hughes, does he understand what he's got himself into? Wait till Brenda's mother hears about this, it'll be all over the high society page of the LA Times. "Pitman daughter to marry prominent attorney."

After a short while the whole Ranch was on fire with gossiping excitement and even the simple "blood-test" had become part of a grand ritual. Many piled into the bed of my pick-up and we headed off to the LA Free Clinic. All the while, the chatter of the girls continued and drowned-out the hum of my truck's engine. Typical female excitement associated with a thousand years of sacred traditional values was now actually upstaging the infamous MANSON trial.

As might be expected, upon realizing the entire scope of his "commitment" to a Manson Family darling, Ronald Hughes committed the unforgivable sin - he called off the wedding. Soon thereafter, mother nature drowned the life out of him.

As a consolation to me (for missing the wedding film event) I was invited to film Clem's infamous ritual where he puts on a black hood and hangs the judge.

Copyright 2013 Robert Hendrickson
used with permission for posting on eviliz.com

Order The Collection and take advantage of the EVILIZ SPECIAL

$89.95 for the MANSON Media Collection (the MANSON Book and both DVDs - including Priority Mail shipping. The DVDs come in smaller thin plastic cases so everything fits in flat rate package, but includes larger personalized DVD inserts. Must be purchased via PayPal or M.O. Just email rarefilms@yahoo.com for his PayPal account to send payment.