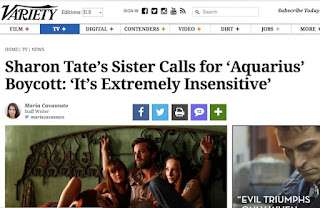 Debra Tate is upset that NBC Television included a graphic recreation of her sister Sharon's murdered corpse as a prop in its fictional program Aquarius. In calling for a boycott of the show, Tate said of the "body" and the recreation of the murders, “Do it tastefully, or at least give us courtesy of knowing what you guys are doing. It’s extremely insensitive to be portraying people in an untruthful manner.” 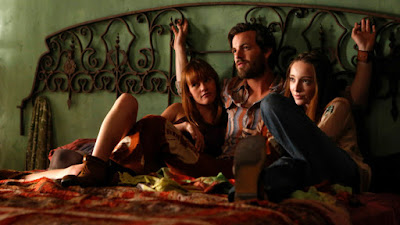 "Aquarius," starring David Duchovny, returned to NBC for a second season earlier this week. But Sharon Tate's sister, Debra Tate, is unhappy with the way the series depicts the her sister's brutal murder, which takes place in this season of "Aquarius." She is calling for a boycott of the show to raise awareness of how victims of real-life crimes are depicted onscreen.

One of the teaser trailers for the show, for example, shows a dead Sharon Tate on the ground and a close-up of her face as Manson walks over her. Debra Tate was given no warning of the trailer's explicit nature and was very distraught.

"If it were our dead bodies lying on the floor, you don't want the world witnessing that," she added.

Tate said she requested a sit-down with NBC but was "completely ignored." So although it seems unlikely the network would take the show off the air as she would prefer, she would like NBC to at least apologize.

"Do it tastefully, or at least give us courtesy of knowing what you guys are doing," she asked. "It's extremely insensitive to be portraying people in an untruthful manner."


Maybe #BOYCOTT @nbcaquarius is too generous. Call should be #CANCELAQUARIUS for its horrific #exploitation. @NBC pic.twitter.com/TrLGPUMzSE
— Debra Tate (@debra_tate9) June 17, 2016


Tate has also been gathering signatures on a petition objecting to the potential parole of Leslie Van Houten, the  Manson family member who was convicted for the murders of Leno and Rosemary LaBianca. On Monday, without an appointment, Tate is going to deliver just short of 140,000 signatures to Governor Jerry Brown.

Van Houten has been denied parole 19 times but this time around a California review board recommended her for parole. If the ruling is upheld, it will be forwarded to Gov. Brown, who then has the option to block her parole.

"These people will be free to move around the country if we don't do anything about it," said Tate.

"Governor Jerry Brown must know that society cannot trust someone who committed such a heinous murder without showing any remorse for years," wrote Tate on her petition website.

Tate feels that the entertainment industry goes way too far in its dramatization of true crime. She has been trying to bring awareness by speaking out with her friend Kim Goldman, sister of Ron Goldman, who felt similarly about "American Crime Story" and the way the events were portrayed on the FX anthology.

"I would like to see the industry take a different attitude. At the very least they could apologize," Tate said.