What became of the "Hare Krishna" who burned Manson?

Some of you might recall these tabloid photos from 1994 when Manson was doused with lighter fluid and set ablaze: 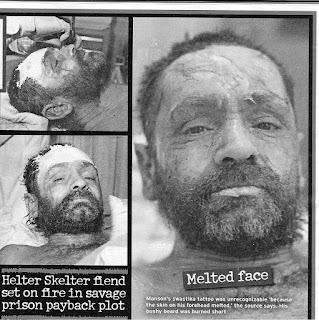 We were curious as to what became of him:

Jan Holmstrom sat in a Hall of Justice courtroom yesterday in shackles the sheriff's department reserves for those considered too volatile for simple manacles.

A thick chain ran around his waist, connected to two handcuffs that bound his hands together in front of him, then looped down his body to his feet, cinching them so that the 47-year-old man could only walk in small, shuffling steps.

But Holmstrom was not the image of the raving paranoid schizophrenic that those who know him claim he can be. Having received psychiatric treatment while in jail, he sat calm and composed and listened intently as Superior Court Judge Lenard Louie pronounced that Holmstrom was not guilty by reason of insanity for the stabbing of a man inside a Cole Valley Hare Krishna temple in November 1994 -- an act Holmstrom has said he did for his God.

For a man whose life has been marked by violent acts committed against himself and others, including the shotgun slaying of his father in Pasadena over 20 years ago, the judge's finding was the most humane decision that could have been made, Holmstrom's lawyer said.

The ruling, which Louie based on the recommendations of three psychiatrists, means that Holmstrom will not be sent to prison for his crime. Instead, he will go to a high security mental facility that Holmstrom's lawyer hopes will provide him with extensive psychiatric care.

"We would not be where we are now, if Mr. Holmstrom had gotten the proper treatment the first time he got violent," said his defense lawyer Sheila O'Gara. "The mentally ill fall through the cracks. They don't belong is the criminal justice system, but there is no other system to put them in. The government has shirked its responsibility."

While Holmstrom was awaiting trial on the charges of assault with a deadly weapon and burglary for the Nov. 26, 1994 attack at the Hare Krishna temple, O'Gara and prosecutor George Beckwith came to agree that state prison was not the right place for Holmstrom.

Holmstrom was not given proper psychiatric care or medication for his illness, when he was serving time for the 1974 slaying of his father, O'Gara said. In prison, he sent death threats to family members and attacked guards and prisoners -- including fellow inmate, cult leader Charles Manson, whom he set on fire.

If the 1994 case had gone to a jury trial and Holmstrom had been convicted on the charges, the outcome would be the same as his earlier trip through the justice system, O'Gara said. He would be sent to prison, receive no psychiatric care, later be paroled and, without supervision, probably become violent again, she said.

Under Louie's ruling yesterday, however, Holmstrom can be incarcerated for as many as 25 years. His release will depend on the opinion of psychiatrists who will evaluate him periodically.