Both Matt and myself have Sanders new book Sharon Tate- A Life.  We are both trying to read it but we are having trouble because it's so damn bad.  Speculation and flights of fancy abound.  We have agreed to each work on certain parts of the book and present a book report together.  So stay tuned.

When Sanders wrote his first book, The Family, veteran reporter Mary Neiswender who covered the Tate  LaBianca trial for the Long Beach Independent did a review.  In the opening paragraph she proffered an alternative title for the book "Rumors I Have Heard Or Thought About Re: Manson, Cults, Weirdos, Etc." .  This would have been a great title for the new book! 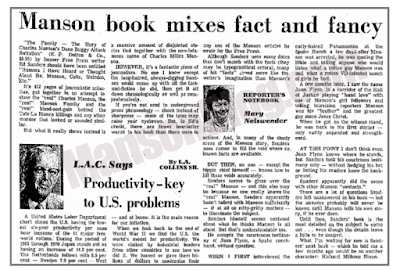 "The Family — The Story of Charles Manson's Dune Buggy Attack Battalion." (E. P. Dutton & Co., $8.95) by former Free Press writer Ed Sanders should have been entitled “’Rumors I Have Heard or Thought About Re. Manson, Cults, Weirdos, Etc.”

It's 412 pages of journalistic minutiae, put together in an attempt to show the “real" Charles Manson, the "real" Manson Famiiy and the "real” blood-and-guts behind the Tate-LaBianca killings and any other murder that looked or sounded similar.

But what it really shows instead is a massive amount of disjointed stories tied together with the now-infamous name of Charles Mlles Manson.

HOWEVER, it's a fantastic piece of journalism. No one I know except the long-haired, always-digging Sanders could come up with all the fact-and-fiction he did, then get it all down chronologically as well as comprehensively.

If you're not used to underground press phraseology - shock instead of sharpness - some of the tales may raise year eyebrows. But, to Ed's credit, there are fewer four-letter words in his book than there were in any one of the Manson articles he wrote for the Free Press.

Although Sanders uses many dates that don't match with the faces (they may be typographical errors), many of his "facts" sound more like the writer's Imagination than Manson’s actions. And, In many of the shady arrests of the Manson story, Sanders uses rumor to fill the void where no  known facts are available.

BUT THEN, no one - except the hippie chief himself - knows how to fill those voids accurately.

Sanders seems to gloss over this "real" Manson - and this also may be because no one really knows the "real" Manson. Sanders apparently hasn't talked with Manson sufficiently - if at all on nitty-gritty matters - to illuminate the subject.

Sanders himself seems confused about what he thinks Manson is all about. But that's understandable too.

He accepts the courtroom testimony of Juan Flynn, a Spahn ranch hand, without question.

WHEN I FIRST interviewed the curly-haired Panamanian at Spahn Ranch a few days after Manson was arrested, he was quoting the Bible and telling anyone who would listen what a rotten guy Manson wae oed what a rotten VD-infeelod bunch of girls he had.

A few months later, I saw the same Juan Flynn in a corridor of the Hall of Justice playing "hand love" with one of Manson's girl “followers and telling television reporters Manson was his "brother" and the greatest guy since Jesus Christ.

When he got an the witness stand, he was back to his his first stories - only vastly expanded and strengthened.

AT THIS POINT I don't think even Juan Flynn knows where he stands, but Sanders took his courtroom testimony only - without hedging his bet, or letting tits readers know the background.

Sanders apparently did the same with other Manson "contacts."

There are a lot of questions Sanders left unanswered in his book - but the answers probably will never be known until Manson tells his own story, if he ever does.

Until then, Sanders' book is the most detailed on the subject to come out… even though the details have a little to be desired.

What I’m waiting for now is Sanders' next book -  which he told me a few months ago would be on another carachter: Richard Milhous Nixon.