The End Of Summit Trail 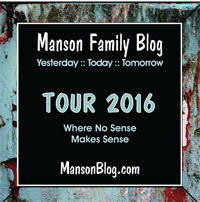 Not two weeks after the arrest of Manson et al. on Deer Creek Road in Ventura County the group again found itself under assault from law enforcement. It was May 2, 1968, and this time the incident occurred and the end of Summit Trail, an isolated location high up at the end of a series of narrow, twisting roads running off of Topanga Canyon Road. The group began staying at this property, which at the time included a vacant house, after their time at the so-called “Spiral Staircase House” behind the Topanga Shopping Center at the intersection of Topanga Canyon Road and the Pacific Coast Highway (California Highway 1).

According to the Sheriff’s report of the incident:

“Acting of information from above informant that above house is being used as a crash pad by narcotics addicts and runaways, writer, Sgt. Salerno, Deps. Rodriguez and Redddy with the assistance of car 103…. proceeded to above location.

“Upon arrival writer observed suspect Manson standing in front of the house.

“Writer identified himself by displaying his badge and stated Sheriff narcotic officers were conducting a narcotic investigation. Suspect Manson replied OK, come in the house, I’ll show you around. Upon entering suspect # 2 was observed lying on a bed, suspects #3, #4, and #5 observed milling about. Approximately five (5) minutes later suspects # 6 and #7 entered with Sgt. Salerno who stated they were in a bus adjacent to the house.

“After exiting the house with all the suspects in our presence, writer observed and heard suspect Manson lean over to suspect Hall and in a low voice said, “Go sit in the chair,” writer observed suspect Hall walk to a chair and sit down. Writer requested suspect suspect [sic] Hall to stand up, to which he complied. A check of the chair revealed evidence held items #1, #2, #3 and #4 on the ground under the chair.

“Writer then displayed the evidence to all suspects and stated, “Do you know what this is and does it belong to any of you”, all suspects remained silent. Suspects were then placed under arrest for possession of marijuana and advised of their rights per SH-AD-477. Each suspect stated he understood his rights.

“Suspect Manson stated that the marijuana could belong to anyone, as a lot of people stay here. Suspects were transported to Malibu Sheriff’s Station by car 103…. and booked on above charge.

“During booking procedure item # 5 was found in left front shirt pocket of suspect Hall. During booking procedures Matron Shirle Smith found item # 6 on suspect Good’s person. Suspect Manson was again shown the evidence, item # 1, #2, #3 and #4 and asked if it was his, suspect stated, no it could belong to anyone of many people. When asked if he smoked marijuana, suspect stated yes. When asked why he told suspect Hall to sit in the chair, evidence recovered, suspect stated I was trying to keep the guys out of your way, so you could do your job.

“The facts of this cased will be presented to Santa Monica branch of the Los Angeles District Attorney Office for their consideration towards a complaint.”

Evidence seized during this raid included a quart of marijuana seeds in a glass bottle (item # 1), a little over two ounces of pot (items # 2, 3, and 4), three pills (item # 6), and some driver's licenses of questionable authenticity.

Below, the Sheriff's report of the incident at the end of Summit Trail: 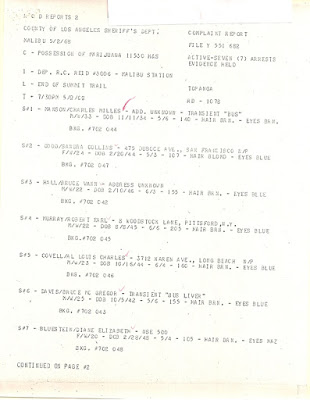 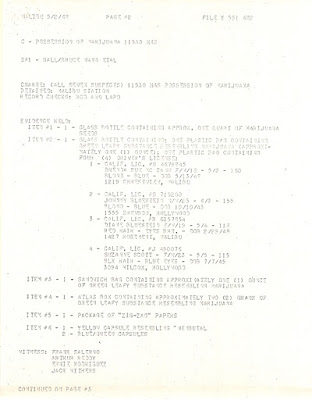 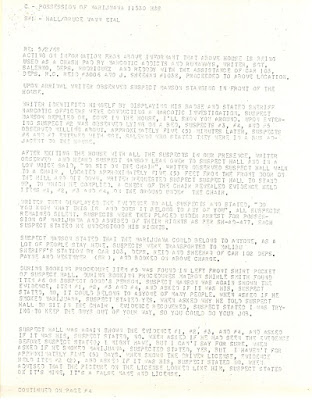 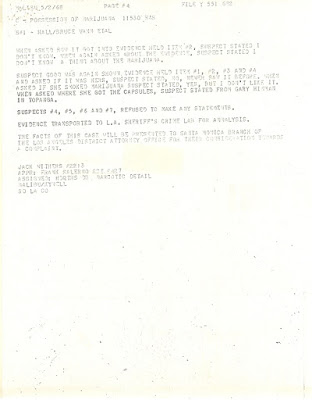 Charles Manson was charged with violation of Section 11530 of the Health and Safety Code, possession of marijuana. On his booking record his address was listed as "transient 'bus'" and his occupation was listed as "musician -- unemployed." 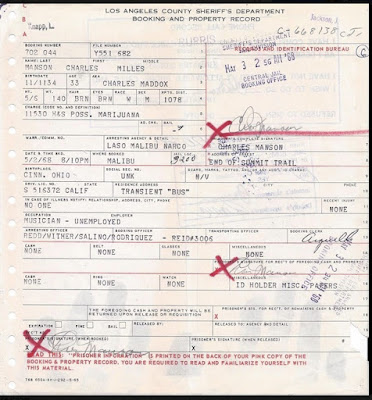 The location of the bust on Summit Trail was another of the destinations for the 2016 MF Blog Tour. The end of the trail is still remote and rustic today; it was easy to get lost in the tight maze of "trails" and we made a couple of wrong turns before we finally arrived at the correct spot. When we got there an older gentleman was leaning on the fence in front of the house at the end of the trail, almost as if he was expecting us. After we identified ourselves and our purpose for being there, the man, Rick (who has owned the house since 1974 and been a denizen of Topanga Canyon for several years longer), gladly visited with us and told us stories of indeterminate veracity that he had heard of "the Family's" presence in the area. He was an interesting living link with the past! 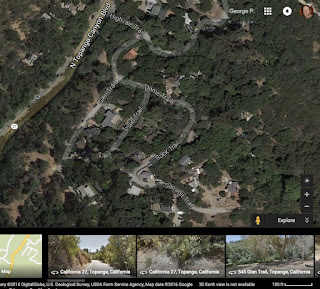 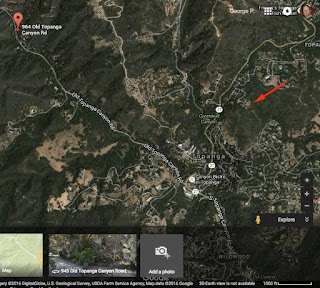 A wider view shows the relationship of the end
of Summit Trail (arrow) to Gary Hinman's
residence at 964 Old Topanga Canyon Road. 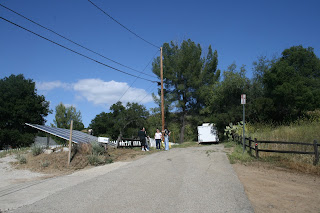 The end of Summit Trail 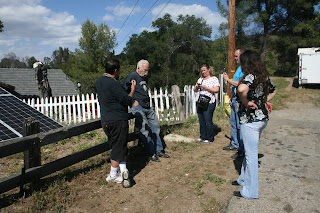 MF bloggers talk with Rick, the owner of the house
at the end of Summit Trail since 1974. 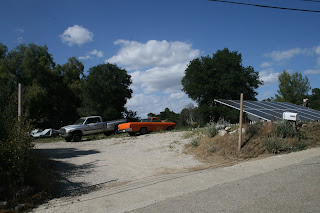 According to Rick, "the Family's" black bus was
parked on this slight rise adjacent to the house,
about where the orange car is. 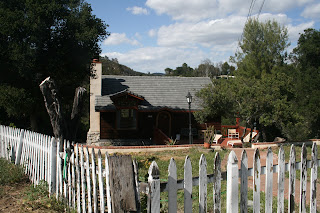 The house at the end of Summit Trail