My Interface With The Manson Family, by Sue Marshall: Part 2 of 3 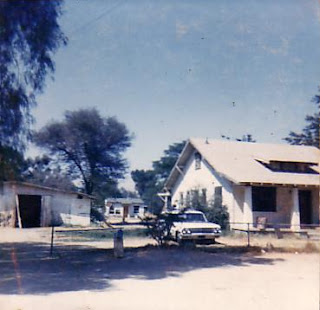 The following day, a group of us Freep staffers drove to the West Valley in two cars. Since I lived in East Hollywood, in the opposite direction, I drove alone in my battered yellow Ford Falcon.  Paul, Shirley, and Judie lived in Reseda, in the same general direction as the Family.  The rendezvous point was the one-story ranch-style house the Family called the Yellow Submarine.[1]

The vivid detail that sticks in my memory was an antique (or imitation antique) sign on the front porch reading:  Doctor Sigafoos, Diseases of the Colon and Rectum.[2]

We were greeted by two of the men.  I believe one was "Clem," Steve Grogan.  The other may have been Bruce Davis or Dennis Rice.  These guys reminded me of weasels or ferrets.  They were thin and dirty, with the wise-ass demeanor of jailbirds. The young women were summoned from the back of the house.  We all sat in the living room on regular chairs and sofas.  I do not recall the décor in detail, but it lacked the ornate arrangements of India prints, temple bells, candles, incense, and psychedelic posters that were the hallmark of good hippie housekeeping in that era.

I stared at the girls.  Squeaky Lyn was a redhead. Gypsy had very black hair.  Sandy Good was a blonde.  They all wore the same odd hair style:  cut short at  ear length, with a few strands left long at one side of their faces. Ed Sanders would learn later that Manson had ordered his female followers to submit to a ritual tonsure, with the harvested hair woven into a vest that was presented to Charlie. [3]

One of the men, again I think it was Clem, began to hold forth:

The police had it in for Charlie. Why, a cop could sit in a topless bar in Van Nuys all evening and still not succeed in getting laid.  Wouldn't it make him want to nail Charlie, who was surrounded by pretty girls who were happy to do his bidding?

As if on cue, the girls assumed insincere smiles. There was something creepy about the scene. 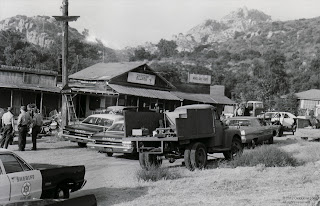 With this preliminary indoctrination accomplished, our caravan left for the Spahn Ranch.

The Santa Susana Hills look like the backdrop of every old Western movie you've seen.

When I was a child in L.A. in the 1950s, there was no Ronald Reagan Freeway to expedite the trip between the northwest San Fernando Valley and Ventura. High above Simi Valley, a road passed along the eventual freeway route and crossed Santa Susana Pass.  It is here I would feel a great excitement, for my family would only be here if we were headed for Corriganville.

Movie stuntman Crash Corrigan had developed a small theme park and tourist trap amid his movie set in Chatsworth.  There was a fake old-West town, with false-front buildings, raised plank sidewalks, hitching posts for horses, and a rustic one-room jail, complete with barred windows. Actors would simulate gunfights for the delight of the children.  We had been raised on Western movies and TV.

At Corriganville, the surrounding hills, dotted with massive granite boulders and yucca, set the stage for those Westerns. When I was in Corriganville I was in paradise.

When our party arrived at the Spahn Ranch, I had a moment of the same giddy excitement. By some measures, at age 18 I was still a kid. I looked around at the desert hillsides, at the movie-set Western town.  The Spahn Ranch movie set was smaller than Corriganville, but it looked very similar, and the two sites were not far away from each other.

I had come to the Spahn Ranch expecting a hippie commune, perhaps with noir overtones.  But what I saw was HORSES!

To my surprise, I saw that the young women of the extended Manson family were seriously engaged in the work of renting out horses for trail rides. They were running a business there[4].  I fought a strong impulse to run to the rental corral, mount up, and explore the desert hills on horseback.  Or at least go pet the horses.

But I was a professional.  I was there to do a job. I had come to interview subjects for a news article.  Would I get the by-line?[5]  I was new on the job and eager to prove my ability.

Glancing around the movie ranch, I saw Ruby Pearl, the old cowgirl who was George Spahn's sidekick.  She emerged onto the back porch of the main house. Her orange hair was pinned up in braids around her head. She looked bemused at the scene all around her.  She must have been seeing strangers  everywhere invading her home, hippies outnumbering the horse rental customers.  And now a new group had arrived from the Freep. We were not introduced to her. She must have perceived us merely as more hippies.  She held a pan of grain.  The chickens strutted, clucking, up to the back porch where she stood.  Ruby Pearl tossed out the feed.

In the yard we were greeted by Sandy Good, holding her infant son. She told us his name was Ivan, or Elf.  She smiled and said that his father was Bobby Beausoleil.

The wind blew. We followed the Mansonites into one of the fake-western buildings. I think it was the General Store. We found seats.  A fine layer of gritty dust covered everything, as you would expect at a desert horse ranch where not a lot of cleaning was done. One hanger-on was a teenage girl, from some suburban home, incongruously dressed in clean white pants.  And she still had all her long hair.  I concluded that she must be a very recent recruit.

Gypsy took up her guitar and soulfully sang Cease to Exist, the song Manson had almost succeeded in selling to the Beach Boys.[6]

I have no recollection of whatever desultory conversation we had that afternoon.  No food or drink was served and no joints were passed. It was like many a hippie commune, without any money to speak of, and with little attention paid to household cleanliness or personal hygiene.  Perhaps the Mansonites were trying to convince us of how normal they were.

The hour grew late, and we departed at dusk.

[1] According to research by Ed Sanders, the address of this house was on Gresham Street in Canoga Park.  He says the Mansonites were evicted shortly after our visit and that the house has been demolished since the events recounted here.

[2] Although I don’t recall the exact name of the purported physician, it wasn’t really “Sigafoos”.

[3] Don’t you wonder where this artifact might be today?

[4] Manson had negotiated accommodations for his entourage from elderly George Spahn;  the deal was that the girls would manage the rent string and the horse rental business. Squeaky was assigned to provide oral sex to keep George contented. Her Family name was derived from the sounds she emitted when the old gentleman felt her up, according to Ed Sanders.

[5] As I recall, it was Paul, as managing editor, who got the by-line. He seemed taken in by Clem’s rationale for the LAPD aversion to Manson. In the weeks that followed, I did not care much that I was not assigned to write an article about the Family. Now, in my maturity, I am very relieved.  I would not have been able to publish any sentiments that the Family would have found satisfactory. Who knows what might have resulted?

[6] According to the story, the Beach Boys had insisted in making revisions to the lyrics, including changing the title to Cease to Resist. This move toward marketability was unacceptable to Manson.