"The Book of the Dead"

The San Francisco Chronicle revealed, a week or so after Lynette Fromme was arrested for the assassination attempt, that the San Francisco Police Department had confiscated the Manson Family's "Book of the Dead" in 1972. 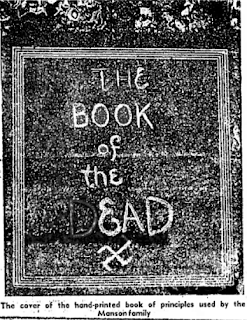 Manson Clan's Book of the Dead

Excerpts from "The Book of the Dead" believed to have been the guiding "law" of the Charles Manson "family" in the southern California desert, were released to The Chronicle yesterday by the San Francisco Police Department.

The photos of the hand printed loose-leaf booklet reveal the leader of the murderous cult to be a male chauvinist.

"Man is god and woman is his.  Woman will be slave to man to serve and bear child.  Woman is the key to paradise when she does what she is told and gives her King, Father, Lord and Master... no talk only her love... woman being directed only by man... and man taking as many as he wants as he ages." it was written in the book.

San Francisco Police obtained "The Book of the Dead" and other Manson family memorabilia as evidence in 1972 when Lynette (Squeaky) Fromme was arrested as a murder suspect.  The charges against her were later dropped.

Miss Fromme now stands accused of trying to assassinate President Gerald Ford in Sacramento earlier this month.  In the 1972 arrest police seized the evidence which included "The Book of the Dead."  There were also a list of names of some of Manson's followers written in blood, a multi-color vest worn by Manson and a number of designs that appear to have some deep meaning, but remain unexplained.

Officers photographed the evidence before turning it over to the young suspects defense lawyer.  Since 1972, the material has been part of the police department's intelligence file on the Manson family.

In another rather cryptic portion of the book, under the heading "LAW" is written:

"Man is the law... his word is final.  Outside your mark, do what you want to anyone, but inside this mark is only peace, wisdom and understanding with no lie for your brother- he is your life.

"If you are a leader of a pack and sign this book, then you are held for the action of all that follow you.

"Sign this book with your soul!  Giving life to your Lord and Slave Master.  To stand in one thought, think as one head, move as fingers on one hand.  Kill or be killed for one.  Leave your past, come to the thought of dying... Now!  Stay with now in your eyes, willing to die and happy to face death."

In another part of the book, under the heading "LAST RUN," there is a list of suggestions or orders on clothing, weapons and vehicles to be used for some apparently paramilitary operation.

For the clothing the book recommends dark green, brown or black garments, "clothes for hiding in the night and clothes that will last."

Sandra Good, a Manson disciple and Miss Fromme's roommate, was contacted in Sacramento last night and asked to talk about the book.

She declined except to say that it was written for another time, "1969 when we were going into the desert."

The Lompoc Record, September 18, 1975, newspaper has some more details about what was in the book. Here are some outtakes from the article. Most of the article is the same as above.

“Knives are advised: “One for eating, one for killing.”

“Grenades are gold” it says and 18-inch sawed off pump action shotguns are recommended.” 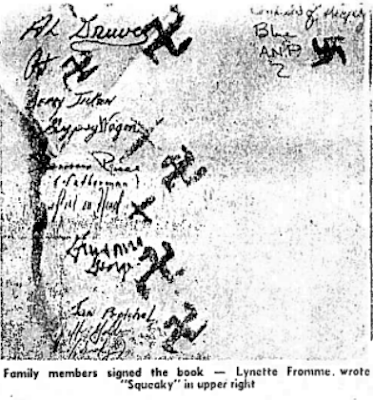 I do not recognize many of the names in the newspaper photo.  The resolution is bad among other things.  However, I do see "Gypsy Wagon" which is likely Catherine Share's signature and it looks like "Sunshine Pierce" under Gypsy's name. That might be "Fatherman", Dennis Rice, under Pierce's name. You can see "Blue" on the right.

The Chronicle article states that the book was confiscated when Lynette was arrested as a murder suspect in 1972.  That would have been the murders of James and Lauren Willett.  It also says that the book was eventually turned over to "the young suspects" defense attorney.  It's unclear to me which of the young suspects attorney the book was given to although the San Francisco police did photograph the book before turning it over.  Presumably they still have the photos in their files.

Robert J. Leahy was the attorney for Billy Goucher.  Unfortunately, Leahy as well as his two law partners have died.  I do not know who Lynette Fromme, Nancy Pitman  and Priscilla Cooper's attorneys were so I was not able to look them up.  Since the article says "young suspects" I doubt that the book was given to either Michael Monfort or James Craig's attorneys as they were older.

I suppose it's possible that which ever attorney received the book gave it back to their client but since it has never surfaced, it seems doubtful.