Quite A few soft core pornographic movies were filmed at Spahn Movie Ranch during 1969 besides Ramrodder.
Two of the movies Shorty Shea had bit parts in were,"Wanda the Sadistic Hypnotist" and "Hard On The Trail."  Below is some info on one of the movies shot there titled "The Female Bunch."
Shot on location at Spahn Ranch in the Summer of 1969, the infamous adopted home of the Manson family from 1968-1969, The Female Bunch was released the same month that California authorities raided the Ranch for Manson and his followers on suspicion of murder in October of 1969.
Plot: After a string of bad times with men, Sandy tries to kill herself. Co-waitress Libby saves her and takes her to meet some female friends of hers who live on a ranch in the desert.  The woman are completely independent of men.   Grace, the leader of the gang, puts Sandy through her initiation and they get on with the real job of running drugs across the Mexican border, hassling poor farmers, taking any man they please, and generally raising hell. Soon Sandy becomes unsure if this is the life for her, but it may be too late.
Watch the trailer
http://www.youtube.com/watch?v=DW6oWyj4m9E 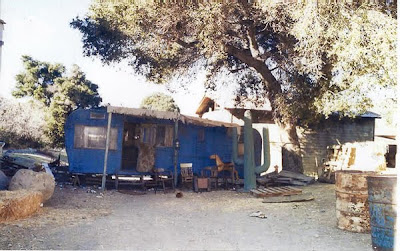