I'm sure we've all noticed many of the the clingers-on during the trial. You know, the kids who appear in the photos with Family members that none of us can identify (not for lack of trying). Some can be identified like "Kevin" in the Hendrickson films. Robert long speculated that he was an FBI plant. Like most of the others he vanished never to surface again.

One in particular has always intrigued me. An artist named Nancy Jo Davis. You may recognize a few of the photos. She is briefly mentioned in the Sanders book "The Family" on page 399 (chapter 81).


There was a blonde artist named Nancy Davis, who said she was from Seal Beach, south of Los Angeles, who began to frequent the court during Kasabian's testimony. She was an example of the women who were attracted to Manson himself. She had waited for hours to get a seat, whereupon she had flashed Manson a right-handed open-palm mudra and then the number seven (five fingers on one, two extended on the other.)

Manson had eye-dinged her. "He hypnotized me," she told me.

"Did you look at each other?" I asked. "Yes," she replied. "We are one. That man has a message that is of world importance."

On a previous day in the courtroom, he had given her the Tut Zap. The next day she said, "I had to go to the library to read books. He took me clear back to Tutankhamen. They opened up the tomb of Tutankhamen on November 11, 1934, Manson's birthdate." One of my scholarly specialties was Egyptology and I had taken a course in Egyptian at the New School in N.Y.C., so I said, bullshit. She replied that the tomb was opened two years before M's birth. Nope. Manson was actually born November 12, 1934, according to his birth certificate, and Howard Carter and Lord Carnarvon opened Tutankhamen's tomb on November 25, 1922. Even so, Tut vibes were still Tut-vibing as far as she was concerned, as she sat in the courtroom making sketches.

According to her daughter:


"she was the back up court artist for the Manson trial, She was about 34 in the photos at the time of the Manson trial. She visited him in prison at least once when he was sent north, and he corresponded with her frequently for awhile."

Seemingly she went from back up court artist to Manson groupie, "joining" the family so-to-speak, post-murders: 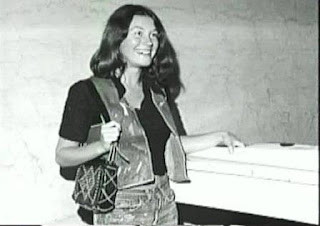 She was even found in contempt of court and saw a few nights in the hoosegow! 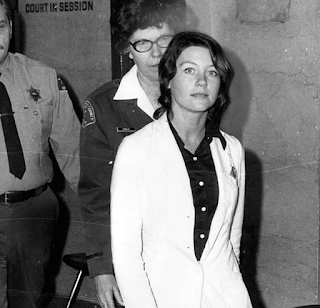 LOS ANGELES, Jan. 1 – A freelance artist who shouted out at the Tate-LaBianca murder trial that she wanted to defend Charles Manson was found in contempt of court yesterday and sentenced to three days in jail.

Superior Court Judge Charles H. Older, presiding at the long trial, made the ruling late yesterday afternoon following a brief contempt hearing for 34-year-old Nancy Jo Davis, whose portrait of Manson was published this week in a national news magazine.

Before she was sentenced, the slender, attractive Miss Davis said she wanted to "be a witness" before the jury which is trying Manson and three female followers for the August, 1969 murders of actress Sharon Tate and six others.

Judge Older told the woman that he had seen her in court many times before and observed her waving and nodding to the defendants.

"They’re my friends and I try to communicate with them," she replied.

The jurist asked Miss Davis why she had shouted out in the courtroom.

"I only do what wisdom, what love tells me to do," she answered.

Miss Davis apologized for her conduct, however, and admitted her act.

Judge Older said her conduct was “disorderly, a breach of the peace and disruptive to the courtroom.

"I judge you to be in direct contempt of court," the jurist added as he sentenced her to the County Jail.

Miss Davis' outburst occurred as Manson’s attorney was giving closing arguments to the seven-man, five-woman jury. Her contempt hearing was held after the jury was dismissed from the courtroom.

The trial will resume on Monday as closing arguments continue. 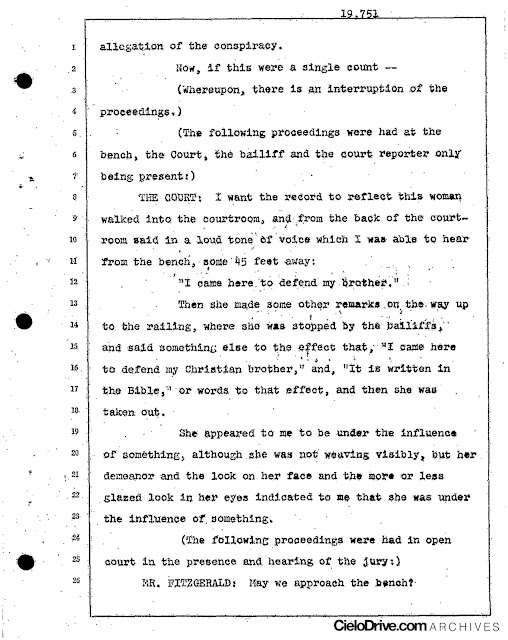 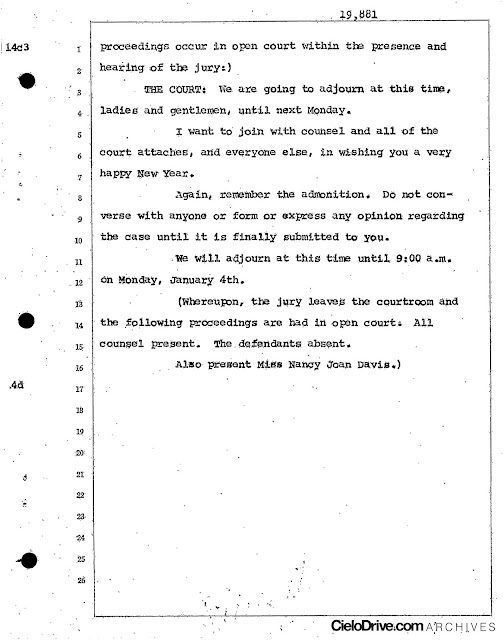 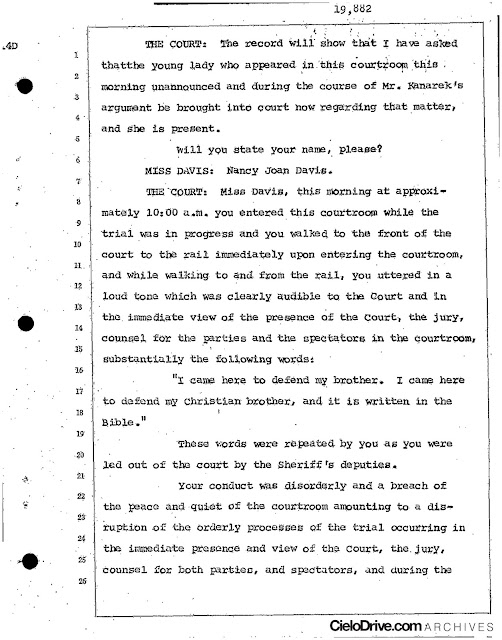 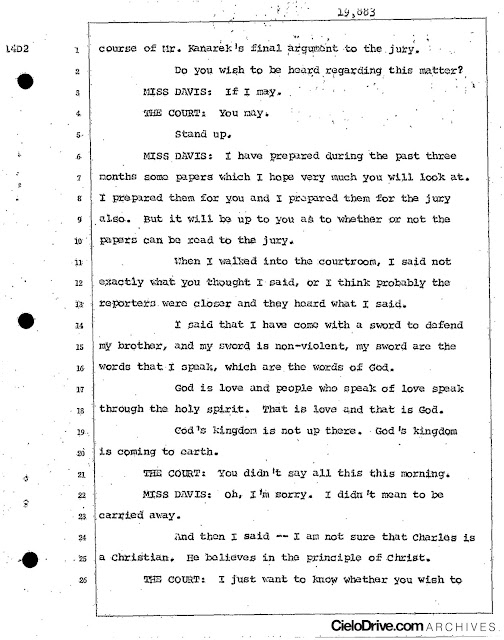 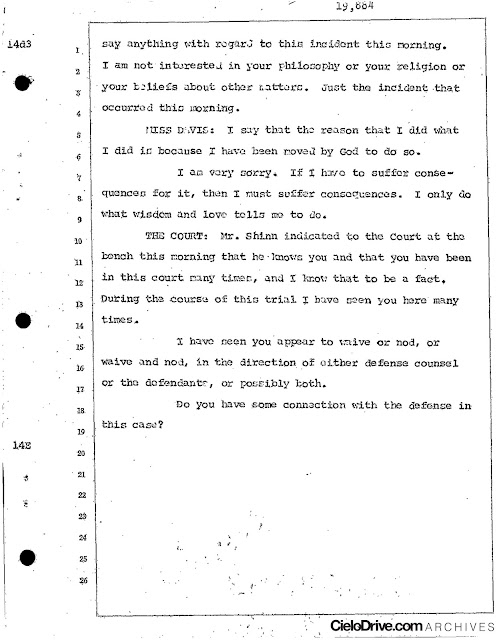 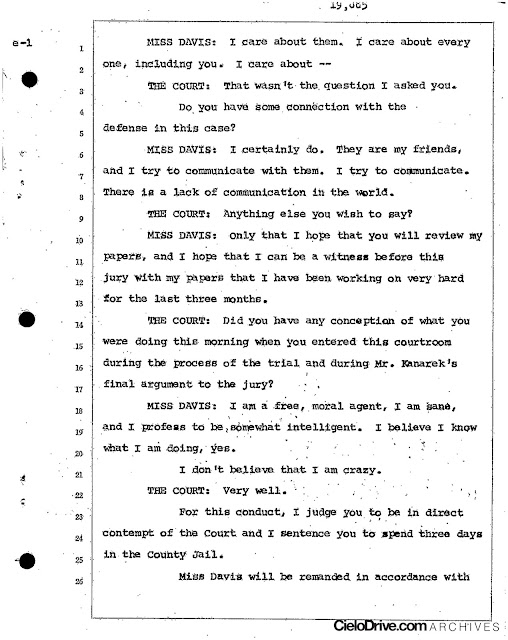 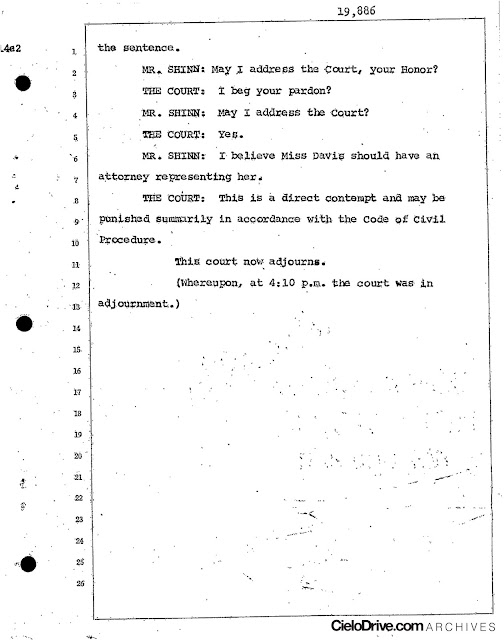 Nancy is 80 now and is a "retired" artist. I'm not sure how an artist "retires". I've always thought of it as not so much a job, but who you are. Kind of like retiring from being ugly.

Some of her work can be purchased on-line like these: