Keeping Faith with the Manson Women 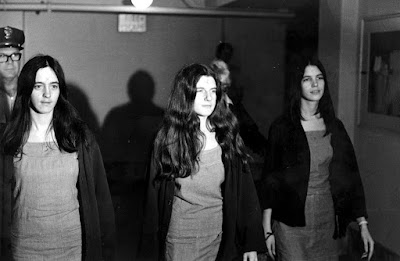 Every August since 1969, we, as a culture, have taken a deep breath and tried to figure out how we are going to live with Charles Manson. This year marks the first time that we will manage this reckoning without the "wild-eyed leader of a murderous crew," as his Times obituary described him, in the world. The news of two major motion pictures about the Manson family—one directed by Quentin Tarantino and the other by Mary Harron—suggests that we retain our taste for Manson art. These cultural creations range from serious, book-length investigations and extended musical works to seemingly thoughtless shout-outs, which individually serve to undercut Manson's scariness but collectively underscore the cult leader's centrality to American conceptions of race, class, sexuality, and family. Signs of Manson and his followers are far-flung and include writing in blood on the wall, the trope of the sexy-weird female hippie, and charismatic men with beards and "Southern" accents. Every year, we add to this of stock of sounds, images, and stories, as we continue to absorb the Manson-family trauma.

August, 1969, of course, is when members of Manson's Los Angeles-based commune killed Sharon Tate, Jay Sebring, Abigail Folger, Voytek Frykowski, and Steven Parent at the home of Tate and Roman Polanski, in Benedict Canyon, and then killed Rosemary and Leno LaBianca the following night, in Los Feliz. I won't recount the details of the gruesome murders; perhaps you've read the prosecutor Vincent Bugliosi's true-crime bible "Helter Skelter," from 1974, or seen the television miniseries based on it. Even if you haven't, you probably know the basic details of the crime—the feral hippies, the messages left behind, the off-the-hook race-war motive that Bugliosi developed almost immediately after being assigned to the case and that he convinced so many of us was Manson's true animus. The Tate-LaBianca murders, as the novelist Zachary Lazar has suggested, very quickly moved into the realm of what he calls "contemporary folklore." For decades, we have used the Manson family and its crimes to indict the putative excesses of the counterculture.

I want to borrow from some of the enormous cultural power that Manson has accrued to call attention to the life and work of another key figure in the history of the "family," who also died last year: Karlene Faith. Faith's name probably won't ring loud bells, if any at all. She was a radical-feminist criminologist who spent her career as a teacher and a researcher at Simon Fraser University, in Canada. In 1972, while a graduate student in the history-of-consciousness program at the University of California, Santa Cruz, Faith co-founded the Santa Cruz Women's Prison Project. Through this group, Faith came into close contact with three of the Manson "girls": Susan Atkins, Patricia Krenwinkel, and Leslie Van Houten.

The fact that these young women are so often called "girls"—in historical narratives, in film, and in fiction—begins to hint at our confusion regarding who they were and how they lived. There was a complex array of women who came to be known as the Manson girls: some were exploited and abused minors, but others seem to have exercised a fair amount of power in the family. The "girls" were vulnerable runaways, pragmatic sister-wives, and terrifying tricksters. But, in the wider culture, the women got treated most frequently as objects of prurient male interest. Thomas Pynchon, in his novel "Inherent Vice," imagines the appeal that the Manson women hold for his character Doc, and to so many other men: "Submissive, brainwashed, horny little teeners . . . who do exactly what you want before you even know what that is. You don't even have to say a word out loud, they get it all by ESP."

The coalition of feminists associated with the Santa Cruz Prison Project treated the women of the Manson family like active subjects—as people who could liberate themselves. The Santa Cruz radicals were there at the invitation of Virginia Carlson, the warden of the California Institution for Women, where Susan Atkins, Patricia Krenwinkel, and Leslie Van Houten were imprisoned in the Special Security Unit. These feminists were enacting a profound form of rehabilitative practice. Soon after the end of the trial, the women (and some men) of the Santa Cruz group recognized that the three convicted women would need to see themselves as belonging to a different community—a new family of sorts—that was rooted both in the individual dignity of each woman and in the power of collective support and education. Prison administrators approved a program to raise the consciousness of the imprisoned women according to feminist principles. More than forty years after the experiment was devised and implemented, it is still more than a little shocking that it was approved.

Carlson had to have known that members of the Manson family had been taken up by a range of observers with problematic motives: from Bernardine Dohrn rhetorically offering the family the Weather Underground stamp of approval to Joan Didion shopping for dresses (literally) at I. Magnin to help make sure Linda Kasabian would be ready for her closeup at the trial, it did not take long for an appealing outlaw aura to develop around this hardscrabble bunch. David Felton, who co-wrote, with David Dalton, Rolling Stone's cover story on Manson, in 1970, told me that he and Dalton were prepared to greet Manson as some kind of organic rebel, when they made their trip to interview him in jail. Then they actually met him.

But the Santa Cruz collective, with its commitment to radical social change, seems to have remained untouched by celebrity worship. Karlene Faith was a central figure in this effort and wrote about it in detail in her book "The Long Prison Journey of Leslie Van Houten," from 2001, and in a monograph on women's confinement and resistance. For years, Faith embodied restraint, keeping a low profile in her work with the Manson women. Susan Atkins, for her part, was not shy about promoting the importance of Faith's work. Atkins, in her autobiography, writes with deep gratitude about Faith, whom she refers to as a "light in the darkness." Building on the women's-studies curriculum that Faith and her collaborators brought to the Special Security Unit, Atkins was able to develop a new sense of how she had "walked into" her own oppression. Through the intervention of Faith and the other feminists, Atkins experienced a revolution in her mind: "Suddenly I found myself free."

Virginia Carlson, the prison warden, must have been some kind of feminist herself. According to Faith, Carlson wanted to "raise the women's consciousness to a point where they would be able to think clearly for themselves, and recognize how deeply their subordination and rote obedience to Manson had degraded their humanity." From 1972 to 1976, Carlson invited "carloads of graduate student instructors, professors, law students, artists, performers and community activists from throughout the state" to "corrections valley," where they came to teach a curriculum that included studies of women and the law, ethnic studies, creative writing, and radical psychology. (Carlson did pause the program briefly in its first year, after Faith ended a letter to one imprisoned woman with the word "venceremos," meaning "we will overcome." Carlson may have approved of the general goal of consciousness raising, but aligning this closely with Che Guevera was too much.) According to Faith's account, the volunteers were especially affected by the work they did in the Special Security Unit with Atkins, Krenwinkel, and Van Houten. Here they met "three young, attractive, intelligent and unexpectedly endearing and vulnerable women," who appear to have thrown themselves into their studies with great energy. Faith and the others were moved, especially, by the talent that the women displayed in handicrafts and singing (apparently they sang a beautiful, close-harmony version of Buck Owens's "Cryin' Time").

The conversations that took place among the jailed women and their visitors seem to have been wide-ranging and lasting in impact. In addition to the regular instructors, the prisoners had visits from a number of key figures from the emerging "women's music" scene, including Meg Christian, June Millington, Holly Near, and Linda Tillery. They learned about poetry from Judy Grahn and took seminars with the radical writer Paul Krassner and with scholars who spoke on politics, the blues, and women's history. This was not "deprogramming," as it came to be familiarly called in the nineteen-seventies, but, rather, an acknowledgment that a holistic political, social, and cultural education was the most powerful tool to help transform Atkins, Krenwinkel, and Van Houten back into the "independent, promising young people" they had been before being turned into, as Faith put it, "obedient disciples who lost their ability to think for themselves."

In our current era of mass incarceration, it is crucial to remember the example of the Santa Cruz collective. These radicals never lost sight of how the prison system itself was at the root of the whole tragedy. Faith was aware that Manson's patriarchal "dogma was an inventory of the flaws of the society that rejected him and infantilized him as a prisoner without choice or responsibility." Aside from the Santa Cruz feminists, very few in the world of politics, journalism, academia, or popular culture have worried much about the intellectual or emotional well-being of the Manson women. Though Atkins underwent a religious conversion and attracted the notice of some who were putatively interested in her soul, for the most part, these women have never been the object of much public concern—not when they were vulnerable young women and not now, when they are elderly prisoners. (Atkins died in 2009.) The filmmaker John Waters is atypical, to say the least, in his decades-long advocacy of parole for his friend Leslie Van Houten.

Harron's film on the Manson family is due out later this year, and it is, at least in part, based on the work that Faith published in "The Long Prison Journey of Leslie Van Houten." This surprised me: not only is the book a sober, theory-driven work, but when I corresponded with Faith, in 2014, she made it clear that she took seriously her commitment to protect Van Houten's privacy. She told me that since publishing the book she has been regularly contacted by "people (usually men, often lawyers) who want to make contact with her, or who want my/her help with a planned film, theatre piece etc." "I reply briefly," she continued, "and turn down all requests." I'm not sure what made her say yes to Harron, but, whatever the provenance of the movie, it gives me hope that we might develop a more enlightened approach to the incarcerated women of the Manson family. With empathy for the surviving family members and friends of those murdered in August of 1969, I hope more of us will join John Waters and a handful of others in agitating for the parole of Van Houten and Krenwinkel. Not only have they paid their debt in time served, but, thanks to Faith, her Santa Cruz colleagues, and themselves, they were rehabilitated a long time ago.

This essay is adapted from Jeffrey Melnick's book "Creepy Crawling: Charles Manson and the Many Lives of America's Most Infamous Family."

Jeffrey Melnick is a professor of American studies at the University of Massachusetts, Boston. Read more »


Thank you to Gloop for the tip