A while back Patty did a POST on the Willett distillery, complete with a taste test!  Today we will update on what is happening with the distillery today.

The March 2018 issue of Food and Wine magazine featured Drew Kulsveen, the distiller at Willett, in one of their articles.  Drew would be James Willett's nephew, son of James sister Martha.

A LINK to our many posts on James and Lauren Willett.

At Willett Distillery in Bardstown, Kentucky, fifth-generation master distiller Drew Kulsveen is making some of the world's most sought-after whiskeys.

Ask Drew Kulsveen whose bourbon, besides his own, he likes to drink, and he'll demur. "I don't want to go on the record," he says, "or people will start chasing after it." Kulsveen's opinion matters that much, because in the world of American whiskey, he's a bona fide celebrity.

Kulsveen grew up playing amid his grandfather's rickhouses in the "Bourbon Capital of the World,"

Bardstown, Kentucky. Today, Willett is among Kentucky's last significant family-owned distilleries, and Kulsveen, 36, is its master distiller. It's a huge responsibility because Willett is legendary, yet for 30 years, during a long downturn in the bourbon market, the family distilled nothing. Now, the stills are operative again, expectations among whiskey lovers are fierce, and demand couldn't be higher. "We're running 24 hours a day, making as much bourbon as we physically can," Kulsveen says during a recent visit. For operations like Jim Beam, which distills nearly 40 times as much, Willett's 1,000 barrels a month is "a drop in the bucket," says Kulsveen, "but it's a lot for us."

Kulsveen strikes a different profile than other Kentucky distillers. He is so charismatic, says Fred Minnick, author of Bourbon: The Rise, Fall and and Rebirth of an American Whiskey, that "when he started making public appearances, he ruined it for everybody else."

Still, Kulsveen stays humble. "Distilling's not rocket science," he says. "As long as you use the right ingredients and pay attention, you can have a good product."

We are in Willett's limestone-columned distillery watching the contents of a 10,000-gallon fermenter roil. Gorging on the sugars in a soup of grains and water, yeast sends foaming ripples across the oatmeal-colored liquid. It is transforming the mash into beer that later will be rendered into alcohol in two huge stills: a gnome-shaped copper pot still, antique-looking but new; and a stainless-steel column still with a colorful past. Manufactured for the old Kentucky brand Waterfill and Frazier, the still wound up in Mexico during Prohibition, where it was used to make contraband. Drew's father, Even Kulsveen, bought it for a steal.

The column-still purchase is one chapter in a storied history that has led Drew Kulsveen to this moment. It starts in the 17th century with Cognac-producing ancestors. The Willetts were French Protestants who escaped persecution from the Catholic church by moving to America. They settled in Kentucky, where they got into bourbon making in the late 19th century. Prohibition was a temporary setback. More significant was the blow dealt by vodka when James Bond's "shaken, not stirred" martini helped vodka top spirits sales by the 1970s. Seen as old-fashioned, bourbon lost popularity. By 1981, Kulsveen's grandfather had leased his stills to an ethanol producer that then went bankrupt, leaving only ruined equipment behind.

Drew's father Even took over a few years later. His son joined him in 2004. But it took them until 2012 to start distilling again. In the lull, Willett became a cult NDP, or Non-Distilling Producer.

"We were taking odd lots from Four Roses, Jim Beam"—forgotten casks and ones with flavors that couldn't be blended into standard labels. "Anything under a few hundred barrels, we'd scoop it up," Kulsveen recalls. Willett used the whiskey to make its own brands, including woodsy, spicy Johnny Drum; Rowan's Creek, named for a rivulet that runs through the property; and Noah's Mill, named after the gristmill that stands over it. To yield their lauded flavors, says Kulsveen,  "We got really good at blending."

Minnick confirms it: "They purchased well-aged stocks, let them mature, and would mingle them in small batches, so for the past 10 or 15 years, they put out some of the best product on the market." The whiskeys were coveted by aficionados partly because the operation was so tiny. For a long time, says Minnick, it remained "kind of a secret."

That's changed. With the comeback of classic cocktails, demand for bourbon reignited. Today, American whiskey sales top $3 billion annually. But distillers can't just bottle on demand; whiskey must age. And the overstocks that Willett relied on had dwindled by the time they were able to reboot the stills. "We would have been in a world of hurt if we had not started back up," says Kulsveen.

He leads me to one of the Willett rickhouses. With six stories of thick, wooden beams illuminated by southern sunlight seeping through small windows, the building holds 6,000 barrels of slowly aging bourbon and rye. Though Kulsveen intends to keep most of it for a decade or more, Willett has already released some of its own distillate in its cask-strength Family Estate bottlings as well as in the affordable Old Bardstown series. They're also slowly introducing it into their seven or so other brands.

Kulsveen takes a drill to a cask, capturing the stream in tulip-shaped glasses before stanching the flow with a wooden plug. "It's all about figuring out the different profiles of the barrels and how they meld together," says Kulsveen. "I want character. I want it to stand out."

We sniff, then sip. This is a five-year-old wheated bourbon and a new mash bill for Willett: 65 percent corn—the main grain in bourbon—plus 15 percent malted barley and 20 percent wheat. It is still young, the grain flavor not yet balanced by the wood, but it already tastes deliciously like orange marmalade on brioche toast.

Though the old family recipes are still in use, wheated bourbon, which is smoother and sweeter, drives Willett's distilling nowadays. There are more updates, too. In terms of distilling, Kulsveen is experimenting with stave curing and different barrel woods. At the new visitor center, overseen by Kulsveen's wife, Janelle, a bar will open this spring for cocktails, library pours, and small plates. And the gristmill and some cabins have been transformed into guesthouses.

New recipes, new hospitality—Kulsveen is balancing his heritage with innovation to create a Willett for the 21st century. I can already taste it in the glass: bourbon that's more approachable than in the past, yet deeply nuanced—handcrafted by a fifth-generation Kentucky distiller with the stomach to let each barrel sit until it hits its sweet spot. "Time is really the magical ingredient," he says, taking a sip. "You just have to wait, wait, wait."

The new distillery at Willett is already yielding some great bottles. Go to kentuckybourbonwhiskey.com for where to find them.

Willett Family Estate Bottled 3-Year Small Batch Rye ($45) The scent of this rye mixes maple with aromatic wood. Orangey and spicy with a touch of charcoal, it brings complexity to cocktails.

Old Bardstown 90 Proof Bourbon ($20) Honey-roasted nuts on the nose yield to buttery flavor and notes of dried citrus in this smooth, easy (and affordable) sipper, ending in a lip-smacking finish.

Old Bardstown Bottled in Bond 100 Proof Bourbon ($22) A complex orange peel and ginger scent resolves into a caramel-corn sweetness here, with a balancing bitterness on the finish. 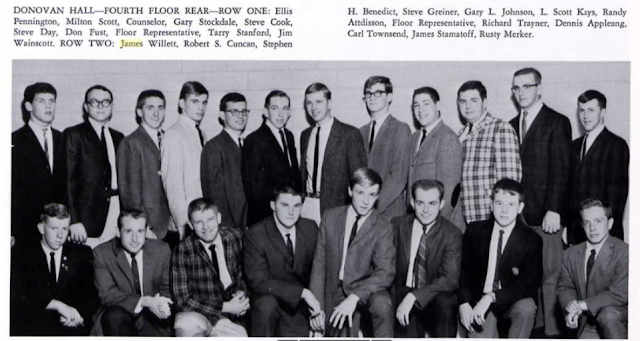 James Willett is first, on the left, in the bottom row in this photo from 1965 when James was a student at the University of Kentucky/Lexington.