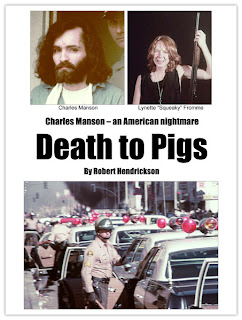 All information used with permission from Robert Hendrickson/Exclusive Film Network
order yours today at:
http://www.exclusivefilms.com/

﻿Patty recently saw where someone commented on a blog something to the effect of, “I don’t know which is more shocking: the fact that Robert Hendrickson is charging $100 for his book, or that he finally got it finished!” Indeed, the cover price is a bit steep, but this is apparently a very small run for a very small audience (i.e., us), and as such, the price point for a self-published text is just going to be high. Furthermore, Patty understands Robert's hesitancy to release his story because after all, this story never ends. YES, there are a ton of typos, and YES his insistence on translating hippie slang for us seems weird. Nevertheless, SUCK IT UP PEOPLE, because there’s definitely a ton of stuff in here that you have never read anywhere else before.

The Manson mystique is a prism: depending on who you are and where you are standing, you are going to see the events differently. Herein lies the reason that the objective “truth” about the murders will never be agreed upon. In the book, Robert quotes Bruce Davis to make this point:

“It is only human to see your cat instead of the author’s cat. Therefore a skilled attorney…is going to describe for the jury his own cat…then the reporter is going to further describe the same cat…(and) if the truth is not exciting, it gets altered”

Robert’s background is military with a very high security clearance. He has a keen analytical mind and presents excellent sociopolitical and legal commentary on the events as he recorded them between late 1969 and mid-1972. He is also into metaphysics: he seems to be interested in how thoughts and energies can attract like thoughts and energies to affect physical events. This theme of “where your attention goes, your energy flows” is only one theme that caught Patty’s attention: another that was of interest was how he explains the Family’s racist beliefs as a manifestation of some of the members’ fanatical efforts to “save the planet.” The main theme of the book, however, is to liken the murders to an extremely misled but “inevitable” protest against the Viet Nam War. Patty will expand on each of these three points in turn with the understanding that because she and you are different people, you may be more interested in the word for word transcription of footage edited into his two motion pictures. You may also be more interested in all of the conflicts of interest he points out with Bugliosi’s case against Charles (note: Robert does not believe that Charles is innocent, he merely points out the multitude of ways in which he did not receive a fair trial). You may even pick up on something that none of the rest of us will, and if you do, we want to hear about it!

Robert states that he had no problem hanging out with alleged murderers because he’d just spent two years in the US Army "where killing is their whole business.” He believes that the Family felt that they were their own establishment, separate from the establishment that went out and killed thousands of innocents at My Lai. The Family did not feel that they should be held responsible for the political statement they were making in much the same way that neither the US President nor the infantrymen who actually do the killing are held responsible for the murders that they commit. He is very careful to point out to us the numerous times that Viet Nam is mentioned by Family members. He also suggests that the timing of the sensationalized Manson trial in relation to the inquiries going on at the same time was not a coincidence: that the Manson trial was actually used by the establishment as a red herring to distract us from the larger crimes in which we were all implicitly taking part:

“The infamous My Lai Massacre was executed on March 16, 1968 by US soldiers in Viet Nam…the story finally broke on November 12, 1969, just two weeks before the LAPD announced that it had cracked the Tate and La Bianca Murder cases.”

The details that he is able to present are though provoking to say the least.

Thought provoking also was the transcription of his conversation with Paul Crockett, the supposed “deprogrammer” of Paul Watkins and Brooks Poston. Crockett describes the mind as a machine made up of three parts: a moving part, an emotional part and a thinking part. Any of the three areas can be conditioned much like Pavlov’s dogs to elicit a response in any of the other areas. The conditioning can be simple, like the wave of a hand, or more complex and intense. Robert believes that Manson’s main purpose in choking Little Paul to within an inch of his life was to provide him with a near death experience, hence causing him to “die in his mind:”


"Soon I realized that I was gonna die and then I though it was okay if I died anyway…and then he… jumped back and he grinned and said, come on. Come on and make love with me. And uh, that was really kinda like coming into his world for the first time.”

Once a family member had experienced death first hand, it became a large part of their consciousness and opened them up to considering things they might have never done otherwise. Like murder, for instance. Merrick asks Little Paul at one point how Tex and three girls could take on and kill four people? Paul replies that the murders were inevitable, that the occupants of the Tate house had actually been attracting it with their thoughts and actions: Rosemary’s Baby, the rumored whipping party, etc. In an interview with Brenda later on in the book, she echoes this same sentiment.

Brenda also touches on the racism of the family in that conversation when she states,

Robert further goes on to claim that the reason non-whites were not allowed to have sex with the Family was to help prevent the extinction of “certain endangered peoples.” This is an interesting idea to Patty: people being endangered much like animals (which is what The Family claimed to be: just animals like all the others on the planet, none more important than any other since “we are all one”). Today, those on the extreme left are so hardcore about saving every single subspecies of say, finches, that they are almost reactionary in their efforts to make it so. It is almost as if the political continuum of the Family is a circle, not a line, and the ideologies that they were espousing met on the back side of the circle. In other words, they are sooooo liberal that they are actually conservative. Looking at the Family in this light, Patty now believes that the Manson Family was separatist not because other races were seen as inferior, but rather as desirable due to their diversity: Remember Squeaky telling Paul Krassner that “If John really loved the Japanese people, he would not have married Yoko?” This seems to be what she was getting at.

“So just what is the point of examining an old crime and its designated court case?” Robert muses. “to learn from the memorable ‘understandings’ of a society in order that the purpose of civilization may be advanced.” Patty could not agree more. There is so much more to be said about this book, but Patty is sure that she is boring you by now. She recommends that you find out for yourself, make your own decision. Team up with a friend if the price is too high. Then, let’s all pick it apart together, shall we?