Searching For God in the Sixties - Dr. Dave Williams Part 1

Welcome to Part 1 of our 6 part series with Dr. Dave Williams, author of  Searching For God in the Sixties. Each part will be presented on Mondays starting now. Dr. Dave will be available to answer questions in the comments section. A special thank you to Daniel - a quiet contributor to the blog, for the assist. 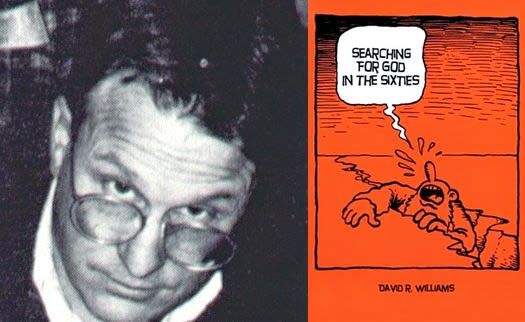 Baby boomer David R. Williams, born in Boston in 1949, experienced the ’60s up close and personal. Taking 1968 off before entering college, he shipped out with the merchant marine, fought against the Vietnam War, worked to elect McCarthy president, rioted in Grant Park, and arrived at Harvard in time for the campus takeover. He later earned a Masters in Theology from Harvard Divinity School and a PhD in American Civilization from Brown. He wrote Wilderness Lost and Sin Boldly! and won the "Excellence In Teaching" Award at George Mason University. He was a Fulbright Scholar in Czechoslovakia in 1991, has two sons, Nathan and Sam, and lives in a former black community, "Swampoodle," where he writes and brews his own bitter beer.

David Williams' book, Searching for God in the Sixties, contains an extended study of Manson in the context of the spiritual and intellectual movements of not just that day but all of American culture. This review of a recent book on Manson (MANSON - The Life and Times of Charles Manson, by Jeff Guinn)  is a good introduction to his approach in the larger essay that follows:

For all the effort author Jeff Guinn put into his book MANSON, he never gets beyond the superficial narrative of Manson as a manipulative conman who wanted fame for the sake of fame and a record deal to match. Yet when Geraldo Rivera asked Manson why he was the stuff of a nation's nightmare, Manson himself in his own way tried to tell him that he was a metaphor, a symbol, a mirror of the nation's darkest self. When Rivera asks "So you are going to kill 50 million people?" he is merely looking for a good soundbite that will sell to the viewers. Manson answers him trying to explain "It is a thought. I am reaping the head in thought." He even points to his head to emphasize: "Don't you see what I am saying, The whole world is a thought…" At which point he leaves Rivera utterly confused, as he leaves Guinn, who, like Rivera, knows only the literal narrative and cannot comprehend the metaphor.

Perhaps the best comparison is to Tom Wolf's Electric Kool Aid Acid Test, another book that talks about the 60s with ever having been, as Kesey said, "on the bus." Many more people have killed many more innocents more viciously than Manson is accused of. The details of the murders are no more the real issue than is the brutality of Christ's death what makes him Christ. Lots of people got crucified. To understand Manson's role requires putting him into the context not just of the 60s but of the whole of American spiritual history.

Defining Antinomiansim is what the first chapter of the book is about, but we do not have space really to do it justice. Scholars treat the word as if it represented some complex dogma. Instead it is all feeling. To be antinomian means, literally, to be against the law, not just the legal law, but the moral law and social law as well. If you are riding in the woods and get lost, said Emerson, throw down the reins and let the dumb beast under you carry you home.  Like Luke Skywalker's removing his computer connection and going with "the force," to be antinomian is to reject the world of logic and learning and moral codes and social programming and instead follow one's  inner self.  Antinomians reject rules and live only by their own  internal urgings. When the moral, social, legal, political systems we inherit are evil,  antinomian rebels are needed to stand outside  the system, but antinomian rejection of the moral law also leads to anarchy and chaos. As Ken Kesey said, "We need outlaws," but we also need structure, so the antinomian heart is constantly at war  with the logical Arminian head. The head and the heart, the Appolonian and the Dionysian, have been struggling within us since history began.

Manson is a classic antinomian. When Martin Luther revolted against the rational structures of the Catholic Church in 1519, he declared the spirit superior to the law, the inner truth of the individual superior to the collective rational of the institutional church and state. But even then, enthusiastic followers went wild, attacking the establishment and declaring the coming of a new Kingdom on earth. The City of Munster was taken over by these radical spiritualists who set up an early Woodstock and declared the law, all law, even the laws of marriage abolished. Anarchy reigned. In the process, throats were slit.

One hundred years later, in Boston the first governor of Puritan Massachusetts banished Ann Hutchinson, the first American hippie, for the crime of Antinomianism, for declaring that the spirit spoke to her and she would follow the kingdom of Christ not the kingdom of politicians. Winthrop noted as he banished her that such ideas back in Germany had led in the Reformation to the slitting of innocent throats.

The 60s were another outbreak of antinomian excess. Black people as symbols of the primitive dark passion that whites had tried to repress had been kept controlled by segregation. The Civil Rights movement let them out of their cage, and thus symbolically let the repressed id out of its subconscious cage. Throughout white America young people similarly let the id hang out, let the passions flow, followed some mystic inner voice rather than the external law. The world they said, foreshadowing the Merovingian, is an illusion created by those with power. We must break on through to the other side.

This is the spirit that Manson reflected, whether he knew it or not. Nowhere in this new book on Manson does the author make any attempt to actually deal with his words, with his ideas, with what he said that made him so charismatic. The effort is to paint him as manipulative monster, out for sex and fame, and nothing more. But Helter Skelter was not just a ride in a British park, not just a literal rebellion of black people against whites. It was a metaphor, as Ouish once said, of the subconscious (black) mind rising up and overthrowing the rational logical (white) head. It was what happened on acid.

Plenty of evidence is thrown out in Guinn's book with little clear documentation of the author's sources or agenda. But evidence also exists that Manson spun a metaphor based on his reading of Revelations and Revolution 9, which he thought people knew as a metaphor but that they, the girls, and Dumb Tex, took as literal. This is why Manson became the stuff of a nation's nightmares. He is that dark id we also let out when we freed black people from segregation. He symbolizes the black fears we repress in ourselves, hence the swastika on his forehead. We look into those eyes and see our own repressed ids reflected back at us. He is, as he keeps saying, the mirror of our inner self we are afraid to see. This is why Manson will never get out of jail. We need to get that id buried back inside its cage.

I suggest anyone interested in another reading of Manson to check out my chapter on Manson in Searching For God in the Sixties . There the tale is fully told.