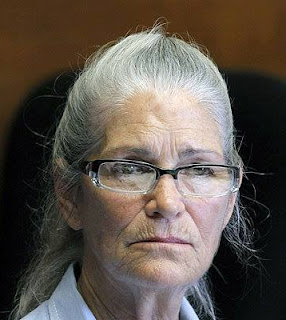 A parole panel refused an emotional bid by former Charles Manson follower Leslie Van Houten to release her from prison 44 years after she participated in a notorious set of murders.

The denial came at the 63-year-old's 20th parole hearing on Wednesday, where the panel heard from relatives of the victims who were opposed to her release.

Board of Parole Hearings Commissioner Jeffrey Ferguson told Van Houten she had failed to explain how someone as intelligent and well-bred as she was could have committed the "cruel and atrocious" murders of Leno and Rosemary La Bianca. She won't be eligible to ask for parole again for five years, but Ferguson said she could request another hearing sooner if circumstances change.

"The crimes will always be a factor," he said. "The question is whether the good will ever outweigh the bad. It certainly didn't today."

Van Houten was convicted of murder and conspiracy for her role in the slayings of wealthy Los Angeles grocers Leno and Rosemary La Bianca. They were stabbed to death in August 1969, one night after Manson's followers killed actress Sharon Tate and four others. Van Houten was 19 at the time.

Van Houten did not participate in the Tate killings but went along the next night when the La Biancas were slain in their home. During the penalty phase of her trial she confessed to joining in stabbing Mrs. La Bianca after she was dead.

"I know I did something that is unforgiveable, but I can create a world where I make amends," Van Houten said before the decision.

With survivors of the LaBiancas sitting behind her at the California Institution for Women, Van Houten acknowledged participating in the killings ordered by Manson.

"He could never have done what he did without people like me," said Van Houten, who has been in custody for 44 years.

The ruling came after a full-day hearing at which six representatives of the La Bianca family spoke in anguish about the loss of the couple.

"Today after 44 years, your crimes still instill fear in innocent people," said Ferguson. "The motive was the worst I can imagine, to incite a race war. Your crimes were gruesome and bloody."

During her comments, Van Houten repeatedly said that she was traumatized by her parents' divorce when she was 14, her pregnancy soon after and her mother's insistence that she have an abortion.

"Many people have traumatic childhoods," said Ferguson. "You have failed to explain at this time what would cause you to commit such horrific atrocities."

Van Houten showed no reaction to the ruling and quickly was escorted out of the room.

In her final statement, Van Houten apologized to everyone she harmed.

"I know that the pain goes on generationally. I want the victims to know I'm deeply ashamed of what I have done," she said.

After years of therapy and self-examination, she said, she realizes that what she did was "like a pebble falling in a pond which affected so many people."

"Mr. and Mrs. La Bianca died the worst possible deaths a human being can," she said.

Arguing to the board, Los Angeles County Deputy District Attorney Patrick Sequiera said some crimes may be an exception to the law guaranteeing the possibility of parole.

"There are certain crimes that are so heinous, so atrocious, so horrible that it should cause denial of parole," he said, elaborating on Van Houten's contradictions over the years.

In response, Van Houten's lawyer, Michael Satris, said his client "sank to the depths of Dante's inferno and she put herself there by consorting with the devil himself, Charles Manson."

However, Satris said his client has totally reformed herself.

"Leslie committed a great sin, a great crime in 1969, and in that time (in prison) she has developed into the equal of a saint," he said. "Everything she does is for humanity."

Van Houten was portrayed at trial by her defense lawyers as the youngest and least culpable of those convicted with Manson, a young woman from a good family who had been a homecoming princess and showed promise until she became involved with drugs and was recruited into Manson's murderous cult.

Now deeply wrinkled with long gray hair tied back in a ponytail, Van Houten at times seemed near tears but did not break down at the Wednesday hearing.

She said that when she heard the Manson family had killed Tate and others, she felt left out and asked to go along the second night.

Asked to explain her actions, she said, "I feel that at that point I had really lost my humanity and I can't know how far I would have gone. I had no regard for life and no measurement of my limitations."

Van Houten has previously been commended for her work helping elderly women inmates at the California Institution for Women. She earned two college degrees while in custody.

Other members of Manson's murderous "family" have lost bids for parole.

One former follower, Bruce Davis, was approved for parole last year only to have Gov. Jerry Brown veto the plan in March, saying he wanted the 70-year-old Davis to reveal more details about the killings of a stunt man and a musician. Davis was not involved in the slayings of Sharon Tate and six others.

Manson, now 78, has stopped coming to parole hearings, sending word that prison is his home and he wants to stay there.

Quotes from Leslie Today at the Hearing 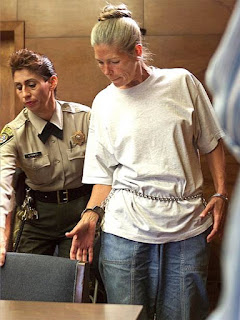 "I know I did something that is unforgiveable, but I can create a world where I make amends," Van Houten said. "I'm trying to be someone who lives a life for healing rather than destruction."

[I was] "like a pebble falling in a pond which affected so many people."

"Mr. and Mrs. La Bianca died the worst possible deaths a human being can," she said. "It affected their families. It affected the community of Los Angeles, which lived in fear. And it destroyed the peace movement going on at the time, and tainted everything from 1969 on."

Parole board commissioner Jeffrey Ferguson asked her, "You felt left out and you wanted to be included the next time, is that correct?"

"Yes," Van Houten said, adding that another of the women tried with Manson, Patricia Krenwinkel, had been like a sister to her and she knew that Krenwinkel had participated in the first round of killing.

"She had crossed the line in her commitment to the race war and I wanted to cross the line, too. ... It was something that had to be done," she said.


FROM the LA Times:

"I twisted myself to the point where I thought this had to be done and I participated".

Asked to explain her actions, she said, "I feel that at that point I had really lost my humanity and I can't know how far I would have gone. I had no regard for life and no measurement of my limitations."

Today, June 5, 2013, is the 20th parole hearing for Leslie Van Houten.  What do you think the chances are this time for her parole?  Will she go the way of Bruce Davis and be recommended for parole only to have that opportunity negated by the governor?   Will she be outright denied like she has 19 times before?  Or will she be granted parole?

We will let you know the board's decision as soon as we learn of it.  In  the mean time here is a December 11, 1969 Pasadena Star News article, one of the first articles to feature Leslie. 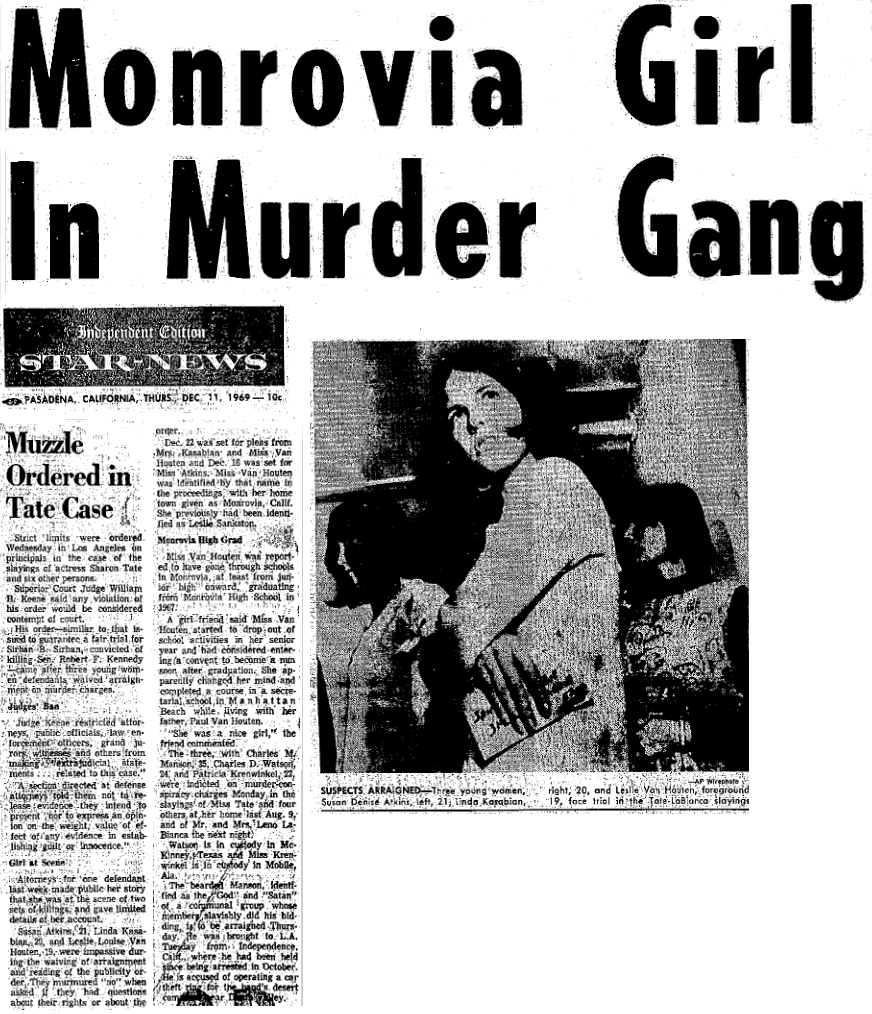 Strict limits were ordered Wednesday in Los Angeles on principals in the case of the slayings of Sharon Tate and six other persons.

Superior Court Judge William B. Keene said any violation of his order would be considered contempt of court.

His order -- similar to that issued to guarantee a fair trial for Sirhan B. Sirhan, convicted of killing Sen. Robert F. Kennedy -- came after three young women defendants waived arraignment on murder charges.

A section directed at defense attorneys told them not to release evidence they intend to present not to express an opinion on the weight, value of effect or any evidence in establishing guilt or innocence.

Attorneys for one defendant last week made public her story that she was at the scene of two sets of killings, and gave limited details of her account.

Susan Atkins, 21, Linda Kasabian, 20, and Leslie Louise Van Houten, 19, were impassive during the waiving of arraignment and reading of the publicity order.  The murmured "no" when asked if they had questions about their rights or about the order.

Miss Van Houten was reported to have gone through schools in Monrovia, at least from junior high school onward, graduating from Monrovia High School in 1967.

A girl friend said Miss Van Houten started to drop out of school activities in her senior year and had considered entering a convent to become a nun soon after graduation.  She apparently changed her mind and completed a course in a secretarial school in Manhattan Beach while living with her father, Paul Van Houten.

"She was a nice girl," the friend commented.

The three, with Charles M. Manson, 35, Charles D. Watson, 24, and Patricia Krenwinkel, 22, were indicted on murder conspiracy charges Monday in the slayings of Miss Tate and four others at her home last Aug. 9, and of Mr. and Mrs. Leno LaBianca the next night.

The bearded Manson, identified as the "God" and "Satan" of a communal group whose members slavishly did his bidding, is to be arraigned Thursday.  He was brought to L.A. Tuesday from Independence, Calif., where he had been held since being arrested in October.  He is accused of operating a car theft ring for the band's desert commune near Death Valley.