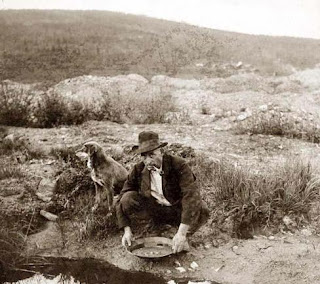 {The first mining stories out of the El Paso Mountains in the Western Mojave talk of discoveries in the narrow canyon known today as Goler Canyon or Goler Gulch. There are many different versions of the original story.}

Between 1867 and 1869, a German prospector named Goler on his way from Death Valley to Los Angeles is supposed to have stopped at a spring to have a drink of water and rest for a while. While taking a drink from the spring he looked into the water and saw gold nuggets lying there. Because he was worried about the Indians he did not stay long enough to investigate the area completely. He gathered up a few samples and continued on to Los Angeles. Goler tried to take a short cut and lost his way. When he realized he was lost he climbed to the top of a small hill and drew a map of the site to mark the location. To mark the location where he made the map he took his rifle and stuck the barrel in the ground and left it there so he might find it when he returned. Then he met Grant Cuddeback, a former prospector turned rancher. Cuddeback helped Goler organize an outfit to go back and find the gold three separate times before they found gold in Red Rock Canyon, where they mined for several years. Goler, still convinced he could find his gun and the spring, left the group.

{Throughout the years that followed, freighters coming back and forth from the successful mining camps north of Mojave, told stories of seeing a lonely man and his burro prospecting in the eastern El Paso foothills. While camping at Mesquite Springs, Freighter “Slate Range Jack” ran into Goler with more nuggets said to have been found 5 miles to the east of them. Many a man outfitted himself with prospecting supplies and headed into the Western Mojave in search of “The Lost Gunsight Mine” or “Goler’s Lost Gold." Unfortunately, the turned out to be riddled with many canyons that fit the description of the one on Goler’s map, and no gun could be found at the entrance to any of them. In 1893, when a bonanza was finally found in a dry narrow gulch in the Southern El Paso Mountains, many believed that this was the site of John Goler’s lost mine, and named the camp that grew up around it}

In March 1893, twenty six years after Goler left his rifle, the Goler Mining District was formed. A spring, which was a mile and a half up the canyon, is considered to be the spring Goler drank from when he found the gold nuggets. In the fall of 1893 a stage line was put into operation from the Goler diggings to connect to the stage line that came from Owens Lake to Mojave. This stage lone connected with the Mojave Line at Red Rock Stage Station. When some men would reach this point they would leave their teams and wagons to follow the “gold fever.”

Fifty years after Goler left his gun as a landmark, it was found on a cattle ranch about twenty miles north of Mojave, owned by Mrs. Rhoda Munsey and her son Will. Even after being left out in the elements for so many years, the words and dates on the gun left no doubt in anyone’s mind that this was the old Spencer Repeating Rifle right where Goler had left it so many years ago.

Above excerpted from Desert Country (2002) by Bob Powers and http://www.explorehistoricalif.com/lost_mines.html

Patty's takeaway from Goler's story is that everyone who found gold in the Mojave thought that they were finding Goler's lost claim. The Canyon in Death Valley is called Goler, but so is the mining village of Goler Gulch which is in Kern, not Inyo County. And, Mesquite Springs where he was supposedly seen with a handful of nuggets isn't near either one of these places. He is an enigma, or a legend. A dirty, dusty sasquatch or leprechaun who guards the entrance to untold, lost riches.

So now you know!