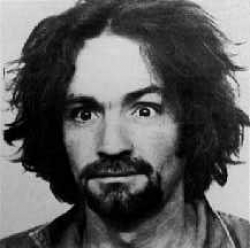 Charles Manson has been called many things, a cult leader, a serial killer, a sociopath, a psychopath, but he's never been called "quotable". In many interviews Manson speaks gibberish and tries to appear crazy, he usually succeeds. He runs interviews like a circus with himself as the star attraction. This is a small sample of some of his craziest quotes during his jail house interviews. Many psychologist believe that Manson is a man who has lost touch with reality. But in a 1980 interview with Tom Snyder this was proved somewhat inaccurate, honorable mention goes to the Synder interview for the simple fact that Synder was able to control Manson by telling him to "come down off the spaceship." Luckily for us, not many reporters are as poised as Tom Synder, so here are some of the strangest things Manson uttered on camera.


There are 10 videos on the page so give it plenty of time to load.