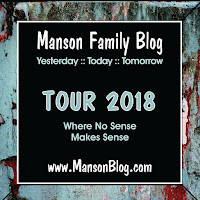 I’m a newbie to the Manson Blog Tour. I have never been to any of these sights. Since I have been to LA several times, I am not sure I can explain why. Here are my reflections on the tour.

Go. The first thing, which is sort of in the reverse of what we saw is the actual size of the area where Spahn Ranch once stood is surprisingly small, maybe an acre total. While there is nothing there from 1969 there are enough land marks that with a good guide you can ‘see’ what is in all those old photographs. 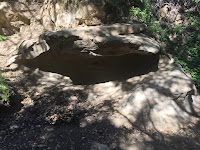 The ‘Family Cave’ and ‘Charlie’s Rock’, which is about ten feet from the cave is just below where the ranch buildings once stood. A few feet from there is where the hammock once hang between two trees. I moved away from the group and took a few moments. That location impacted me. This was where ‘they’ were, where they stood, where Manson played guitar for Terry Melcher and the ground, due to the efforts of our tour guide, are the same as they were then (although trees and brush grow over 50 years).

Climbing up the hills behind the ranch, first offers some amazing views. The ‘back ranch’ foundations are here. Further up this also gives you a perspective of where Frank Retz lived (and worked diligently to get rid of the clan). Still further up the hillsides are the remains of what is known as ‘Bruce’s Corvair’ and evidence of a Native American presence. This trek is not easy. On a hiking map it would likely be listed as ‘difficult’. I didn’t go all the way up to ‘Stoner’s Cliff’ but others did.

A good guide is crucial to this part for the trip. Stoner Van Houten should be your guy (Stoner420fox@yahoodotcom). It's free. Probably about 75% of his tour is Manson related but Wyatt Earp, Bat Masterson, The Lone Ranger, Bonanza and the celluloid magic of old westerns are also part of the tour. Keeping up with Stoner can be a chore physically because he’s obviously walked these trails hundreds of times. 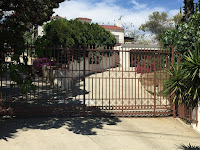 The True House: Manson walked up the driveway that was not where it is today, crossed the yard between the houses and entered the La Bianca houses. There he tied up Leno and Rosemary, leaving them alone and went to get those who murdered them. The owners of the La Bianca house have taken great pains to protect their privacy.

Again, I moved away from the group and ‘contemplated’ what I saw. A dog in the house behind me, standing about where Manson parked the car barked continuously. I looked to where the boat was parked in the street and was impacted by what I have never seen before. Almost 50 years ago terror happened here. I could almost ‘see’ what happened that night. It affected me the rest of the day. 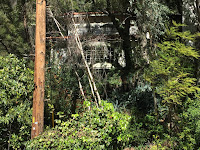 We went here too and stopped at Gary Hinman's house. It looks nothing like it did at the time. Several of us also took a hike through the Snake Pit to the location where most believe the Spiral Staircase once stood. We also stopped at a book store called the Spiral Staircase the guy working there wasn't particularly helpful, probably because we came in as a group asking for pictures of the 'real' Spiral Staircase and suggesting his shop was named after that. He strongly denied any connection. He did tell us that once a year someone (claiming to have an interest in Manson's bones) comes in there asking if 'this is the Spiral Staircase' (it was a gas station in 1969) and then asking if he knew where it was. He added: 'you know, the kind of guy who buys one stick of incense'. I'm not sure what that meant.

We went to Cielo in, well, take a look. That is where the killers parked that night. I’m not sure I can explain how I felt walking up that drive. It was creepy. It was also very, very sobering- to realize what happened just a few hours later then we were there those decades ago. How so many lives came needlessly to an end there. Cielo is simply something that needs to be experienced. Even after we returned to the car little was said about the walk except that it indeed was ‘creepy’. Well, that and the fact it took 7 minutes and 4 seconds to walk one way at a pretty brisk step by Matt, Monica and myself.

My flight- ok- TSA. They stole my lighter, some wood matches I had from a very cool restaurant  and my shampoo. According to them because, according to the x-ray gadget he was looking at, I had 3.2 ounces of shampoo. WTF? "How could you know that?" I asked. Answer: "I can tell from the monitor".

El Coyote- you sort of have to eat there, and I'm glad I did, but the place is a bit run down and the food is nothing to write home about. Don't ask for an after dinner brandy. I like good brandy. They didn't have any.

Doing Monica’s laundry. I asked for help. Stoner was actually responsible for this event because he said we should wash our cloths after walking through poison oak all day at Spahn Ranch. Made sense to me. She went out to dinner. We ordered in Thai and I did Monica's laundry.

Another was the motion detector light activation switch in the ‘guest cottage’ (to the right). The lights came on every time myself or my roommate rolled over. Of course being in the renovated garage that was billed by the owner as a 'guest cottage' at least meant I was likely to survive the tour if things went really bad. At least I wasn't on the couch. We fixed that after night #1.

After Matt ordered a milk shake the first day there was this constant 'whining' from the back seat about milkshakes. Ok, ok ...we took care of that the last day.

The biggest ‘wart’ of the tour was our driver. He rolled through stop signs and even skipped a few entirely. He took turns rather abruptly, merged without warning and drove too fast. One random guy even pulled us over to say he had backed into his car. That one turned out to be untrue. Others in the car also say he ran a red light (or two). I personally didn't see that.
_____

Otherwise, anyone who reads or writes about these events should go on this tour. Being there with others who know so much about this case was an experience worth repeating.

But the real 'upside': actually meeting the people I have communicated with electronically for several years. This was was more important than anything else. I wish Saint, George, Grim, Bo, Starviego, the Col., Robert C., Mr. Humphrat, Whut, Ziggy (especially Ziggy), Brownrice, Penny Lane and everyone else I didn't name (and even MGN111) could have been there. It is worth the trip to get to know who you are talking to on here. They are all good people (despite what the Col. says).

and....Jenn, you should definitely go on the tour.