"One morning (the day after I’d been told that Charlie had warned the girls to “Watch Paul!”), I returned from Spahn’s following an all-night hike. Though totally thrashed, I borrowed Mark Ross’s camper and drove it out to Topanga Canyon. I felt the need to see the ocean. Near the base of the canyon, just before it enters the coast highway, I stopped to buy a cup of coffee. As I pulled into the parking place, I saw I guy get out of his van and trot across the street toward the gas station. He looked familiar, but I wasn’t sure. I rolled down my window and shouted." 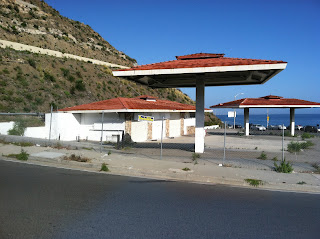 This is the gas station that Paul Watkins was parked at when he spotted Charles Melton, as desribed in his book "My life with Charles Manson". For what it's worth (which is little), it was a Gulf gas station at the time.