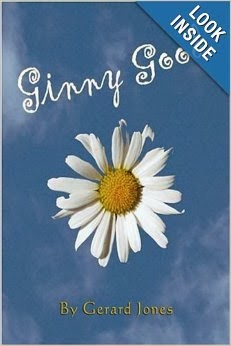 Patty recently got a copy of Gerard Jones' loving tribute to his ex girlfriend, Ginny Good (older by three years sister of Sandra). The book was enlightening for Patty because of the many details that it contains. You can read or listen to the book yourself, here. 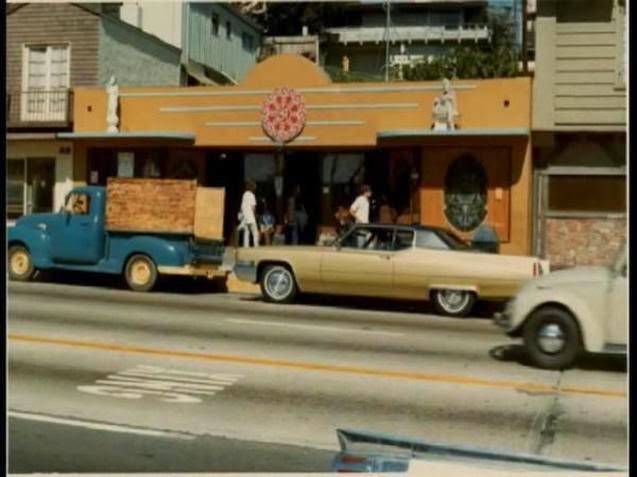 Ginny had an aunt in Laguna Beach that she would visit with some frequency. Laguna Beach is the home of the Brotherhood of Eternal Love and former location of their Mystic Arts World headshop (pictured at right). Ginny and Sandy's dad George lived at 265 Hilton Drive in Boulder Creek (below: thank you DebS) which backs up onto the Boulder Creek Golf and Country Club. 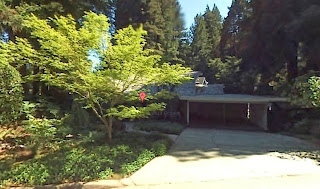 George lived at this address until he died in 1973. Gerard writes that he, Ginny, Sandra and Joel Pugh went there for Christmas, 1964. Sandra and Joel are also in a photograph together at Christmas 1967, so it is interesting to Patty to learn that Joel courted Sandy for at least three years.

Boulder Creek is fairly close to where the Chateau Liberte once stood at 22700 Old Santa Cruz Highway (pool pictured below is still visible on Google Earth) until 1975. "The Chateau" was known in the very early days as Chateau Boutisse, from 1965-1967 it was called the Redwood Chateau, and from 1967-1971 it was the Chateau Regis. It was a known BEL, Gypsy Joker and Hell's Angels hangout where the Grateful Dead, The Doobies, Hot Tuna, Quicksilver, et al would perform. 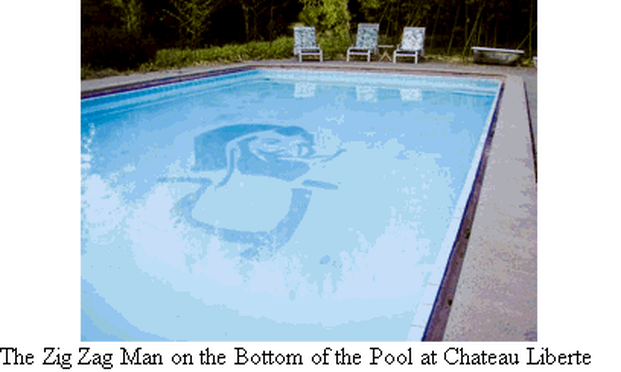 Ginny was on a first name basis with the Grateful Dead, and she got her acid from a guy who got it directly from Owsley, the Grateful Dead chemist known to history as "Bear." In fact, Ginny's acid connection goes back to at least 1964, because Gerard remembers her introducing it to him in early 1965 at La Honda (she had already tried it at this point). La Honda, which is near Stanford University, was the home of Ken Kesey and the Merry Pranksers: Gerard claims that Ginny hung with them, too.

The timeline in which Ginny lived in San Francisco spanned from at least 1963 through her college graduation in 1968. She had roommates on Clayton Street during this time who were studying chemistry at SFSU and/or UCSF, which is walking distance from the Haight. Ginny had emotional problems every Christmas that either landed her in jail or in a mental hospital like the lockup at UCSF, or Scripps down south in La Jolla. As such, it took her at least six years to finish her bachelor's degree at San Francisco State University. Her troubles were so extreme that she may not have made it through college at all, had it not been for a substantial amount of help from George's (unnamed) lawyer. 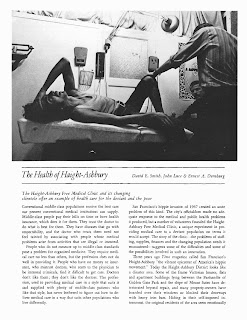 She had at one point a boyfriend named Hank Harrison, who was the original manager of The Dead when they were still called The Warlocks (he is also Courtney Love's father). He formed a group called "LSD rescue" that he claims later became the Haight Ashbury Free Clinic. Bob Ackerley of the BEL claims that they helped found the Free Clinic, as do the Folgers. As you know, the Mansons were regular fixtures at the clinic. Not only were they frequently treated there for the various STDs they picked up along the way, they were also written about by Dr. David E. Smith in the scientific literature regarding their "common marriage."

The free clinic, unlike most other reputable caregivers of the day, had no issues with their clientele being on crazy amounts of drugs. It was accepted and even expected. Today's Rock Med, which is solely dedicated to caring for people who freak out at bay area rock shows, is today's outgrowth of the free clinic. Patty distinctly remembers seeing these people help a soaking wet deadhead with an infant who'd been dyed bright blue in one of the ladies' rooms at Autzen Stadium (June, 1994). It's a long story.

By now, you are probably saying, "so what?" Let Patty backtrack a bit.

Abigail and Voytek had MDA in their systems when they died, which was not a common drug back then. Patty has been working backwards to try and figure out where the MDA came from. 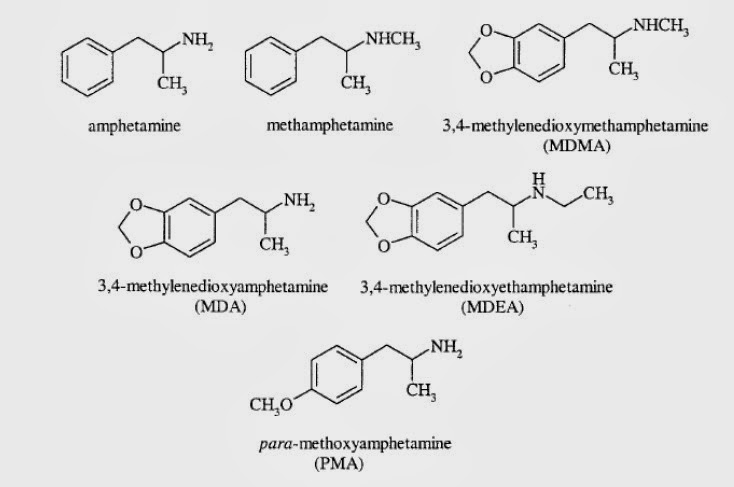 About MDA: it is the precursor for MDMA, aka ecstasy, aka "N-methylated MDA." It is closely related to STP (aka DOM), which freaked out the entire Haight Ashbury during the summer of love. Another variation is called PMA, which is just one molecule different from MDA, but can be fatal because it causes severe hypertension. All of these were referred to as "synthetic mescaline" back then, and they all contain an amphetamine component which alone is known as methamphetamine (trade name methedrine). Patty is a bit stymied here because MDA is a common biological metabolite for the entire cluster, and therefore, it's not very clear what the drug was when Gibby and Voytek ate it. What the coroner found was likely already metabolized. 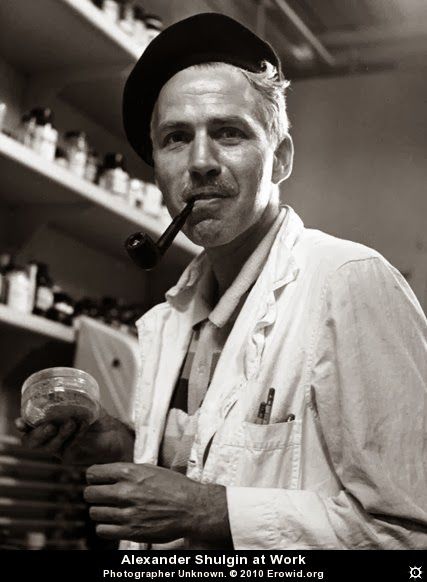 Dr. Alexander "Sasha" Shulgin (pictured at left), the famous drug researcher and author of PIKHAL, claims that MDA was first introduced to him by a grad student in SF, circa 1964. Shulgin also taught at UCLA where Gary was studying chemistry. (By the way: remember that van that's supposed to be Gary's in a remote area of LA? It DOES NOT have a UCLA parking sticker on it: it's a gate pass for gate 9, or maybe 8, pictured below. What was at gates 8 and 9? Patty is still looking into it.) The feds not only knew about Shulgin, they tolerated him and his research until his PIKHAL (and, later, TIKHAL) started showing up in clandestine labs all over the world. The feds shut Shulgin down in the '90s. He is doing fairly well for a man of his advanced age (87), but his memory is probably not what it used to be. You can see his original laboratory notes, here. 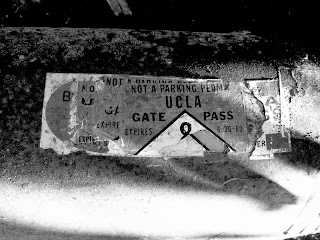 All these years, people have assumed that local law enforcement was totally inept when they conducted their murder investigations. But, what if it's not that, it's that these investigations were consumed into a larger investigation of global drug smuggling and manufacture? MKULTRA, as overused as it is in conspiracy theories, was an actual thing, and many of the drugs in question are confirmed MKULTRA test drugs. Patty was also interested to hear that when Brian Davis called the LAPD recently to inquire about the "Tex Tapes", he was told that they are part of an ongoing investigation. They did not specifically say MURDER investigation, which sent a chill down Patty's spine.

Can you see where Patty is going with this? Of course you can. But, what evidence does she have?

Howz about we let the above sink in for a little? Patty will be back because, of course, THERE'S MORE.