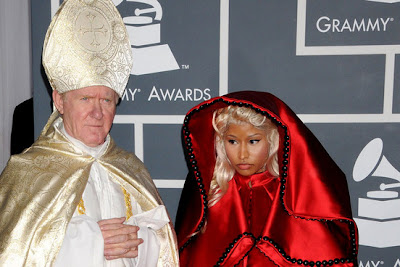 Nicki Minaj's wacky alter ego Roman Zolanski made his Grammy debut Sunday night as the MC welcomed him to the stage during her eye-popping performance of "Roman Holiday."

The Brooklyn-bred MC kicked off the buzzed-about spectacle belting out the opening lines of Pink Friday: Roman Reloaded track in a confession booth. After she confesses her sins, a short filmed dubbed "The Exorcism of Roman" played, and when she returned to the stage, she was strapped to a board, surrounded by religious icons, priests, monks and the like.

The theatrical performance was punctuated by the track's thumping beat and soaring rap/sung portions by the always fierce Minaj. As the song began to wrap up, a priest stepped onto the stage and performed an exorcism on the pop star, who had broken free of her shackles during the song. Minaj was elevated off the stage through the power of prayer as the frenetic track closed out. 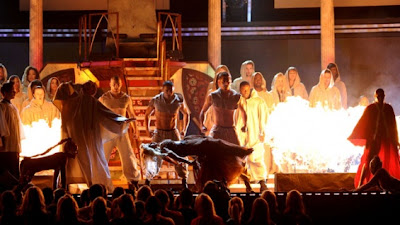 While Minaj's dedicated Barbs know all about her alter ego, not all Grammy viewers might be familiar with Roman, the subject of her upcoming album release. In the sea of Minaj personas, Roman stands out as the most zany. In fact, he was born from Minaj's own anger, as the myth goes. Roman's appearance on Minaj's tracks is hardly new. He once shared a track with Eminem's own alternate persona, Slim Shady, on the Pink Friday song "Roman's Revenge."

As for why Minaj decided to play up religion during her performance, she once shared that aspects of the album (due out in April) will focus on the rehabilitation of Roman. 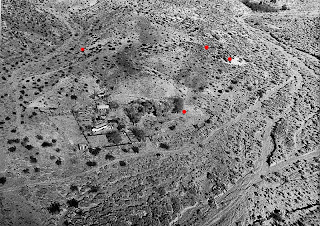 Above photo shows the sites
Remember the AP article from 2008?  The reporter spoke with retired Inyo County Sheriff's Detective John Little who said that in 1974 Assistant Sheriff Jack Gardiner told him to go up to the Barker Ranch and look for four grave sites within 100 to 150 yards of the ranch house.

Also remember that after Dianne Lake spent 6 months in Patton State Hospital, she came to Big Pine, California to live with Jack Gardiner and his wife as a foster child.  She credits Jack and his wife with deprogramming her and saving her life.

Dianne has never spoken of any knowledge of graves.  But how else would Jack Gardiner know?  Is it possible that Diane has blocked out a lot of her former life just to be able to cope? Some believe that that is a strong possibility.

You may recall that Vern Plumlee and Ed Bailey hooked up with Steve Zabriski at the end of October 1969 up in Portland, Oregon.  They told Zabriski that "Charlie and Clem" were responsible for killing Sharon Tate.  Bailey also said that he had personally seen Charlie shoot a guy in the head with a .45 in a gully behind the Barker Ranch.  Zabriski made a report to Portland PD on November 2nd, 1969. 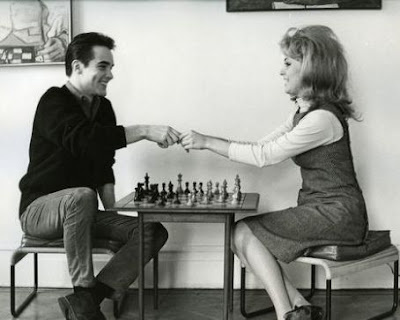 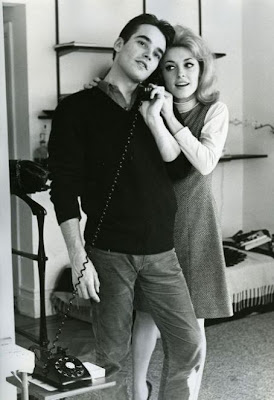 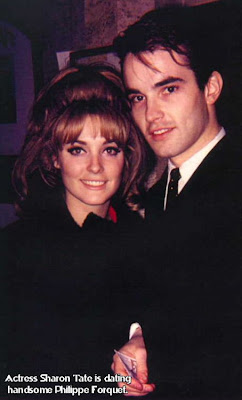 Sharon was engaged to Philippe Forquet before she met Jay.
Philippe was much cuter than Jay and ugly ass Roman. 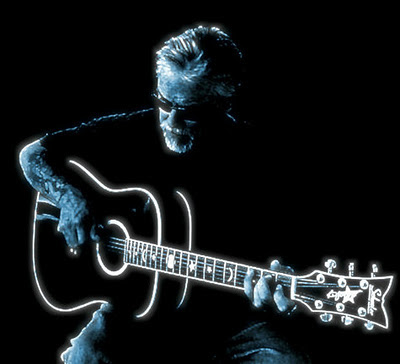 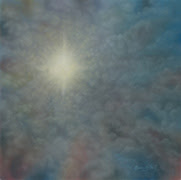 Bobby's site has gone through a big change. Gone are the pictures of Bobby throughout the years. No more magazine articles, no more sob stories.
It seems to be just a site where you can buy Bobby's music and artwork as well as his ex-wife's art. I wonder how his book is coming along.