Once Upon a Time in Hollywood A Novel - Review 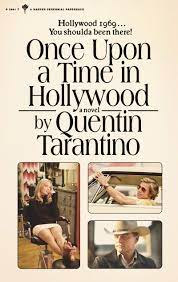 "If I really considered myself a writer, I wouldn't be writing screenplays. I'd be writing novels."

I was mostly disappointed with Once Upon a Time in Hollywood the Movie. I thought the Col wrote a really accurate review of the film. I was hoping for more from the Novel in a couple of key areas. More on Cliff, more on Sharon, and more Manson. Although the Novel did provide me with all three, it was not exactly what I had in mind. Only with Sharon do I feel he hit the spot on what I was looking for. While there was more Manson, and we learned much more about Cliff, I was left disappointed with how he addressed both in the book. As this is a Manson Blog - lets start there. Tarantino took a strange track with the Family in the novel. There is more of the Family and Charlie in the novel than the movie, but they also play a less significant role if that makes sense? The ending of the movie is mentioned only briefly in a flashback type sequence about 110 pages into a 400 page book. It is remembered as an anecdote from one person to another. It is covered in two pages, and Tarantino gives as much detail about what the results of the killings were, as he does recounting the actual killing. We learn that the event caused Rick to get regular spots on the Johnny Carson Show, among other short-term appearance opportunities. Also, the Family is last mentioned with about a quarter of the Novel left, and they are essentially finished for the rest of the story. There are a couple more scenes with Charlie than in the movie, including a face to face with Sharon and Jay. As well, there is an interesting chapter with the Pussycat character where Tarantino gives us his spooky version of a creepy crawl mission that Pussycat goes on in an initiation event. Tarantino also takes a deep dive into Charlies music career ambitions. The Spahn Ranch scene from the movie is in the book, though slightly altered. Cliff leaves at the end without beating up Clem or anyone else. You also get that visit from Squeaky's point of view. However, much like the movie, the Manson Family is really not at the heart of the story Quentin is trying to tell here. Going into this Novel looking for a Manson story is going to leave you disappointed much in the same way the movie did. Albeit maybe a little less so, if you looking for more Manson content and are willing to sacrifice Manson relevance. 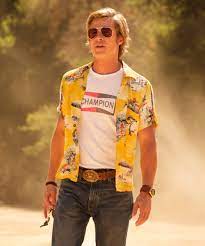 My favorite character in the movie was Cliff Booth. I wanted the Novel to clear up some things about his background for me, and I got way more than I bargained for. Cliff, it turns out, is a much darker guy. We learn how Cliff and Rick met, with Cliff saving Rick from an on-set fire. Cliff seems to have a very strange affinity for Rick, but outside of that it just gets worse and worse as far as Cliff's character. We find out that Cliff did indeed kill his wife on that boat. In a typically Tarantino violence on woman way, we are walked through how she was shot through the middle with a spear-gun. The back story on this event is very detailed and very gory. We discover that Cliff killed more people than any other US soldier in the War, and that he received medals of valor for his performance. We also are told that he continued to kill people after the war, in once instance just to see if he could get away with it. Cliff is also a foreign film buff and a critic of US films. He prefers the work of a Japanese film maker named Kurosawa. Everyone in this Novel has an opinion on film and music it seems. but more on that later. We see how Cliff came into possession of the beloved pit-bull which was given to him to pay off a debt. Cliff is clearly an old-school tough guy, but is given much rougher edges in the book than he was portrayed as having in the movie. In the book, Tarantino explains in the fight scene with Bruce Lee that Bruce is able to identify in Cliff's eyes that Cliff is different from other opponents. Bruce recognizes Cliff is a killer. This Novel makes sure that you understand that about Cliff. He is not the smiling charming buddy of the film. When I saw the movie I felt like the Cliff character was, if not a hero, at the very least a loyal friend and good type of guy. After reading the Novel, I feel like Cliff is more like some of the other villains in some of the other Tarantino movies. Think the Vega brothers. Cold. Lots of wit and one-liners, but ultimately capable of being very cold. 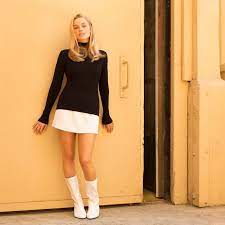 Then there is Sharon. The one area of this book that was exactly as I hoped was the treatment of Sharon. She gets more attention and focus and I loved it. We get to hear her voice and she had some very interesting things to say. Sharon liked pop music more than Rock. Sharon was a Monkees fan. Sharon liked Bobby Sherman lol ( Remember that old song - "Julie , Julie, Julie, do you love me") Sharon does not like the playboy mansion parties or scene, and in fact the scene from the Movie where Sharon and Roman are at the party at the Mansion is written out. At the end of the Novel, Sharon is on her way to one of the Mansion Parties when she talks Roman into having a pool party at their place instead. Sharon is given a chance to express things she could never tell her "hip friends", and she comes across in the novel as very sincere and endearing. As does one other female character....


Remember Trudy? The 9 year old girl who Rick acted with in the episode of Lancers? Well, Trudy is also at the very heart of this novel. Trudy and Rick have an almost love-hate type of relationship in this Novel. In fact, the Novel ends with a conversation not between Rick and Cliff, but with Rick and Trudy. We learn here that Trudy would go on to much bigger things. Trudy would eventually be nominated for an Academy Award for her role in the film Ordinary People, and would go on to win the Academy Award for her performance in a Quentin Tarantino1999 remake of "Lady in Red." 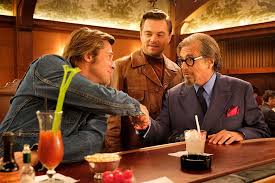 The novel opens up with a chapter reliving the conversation Rick has with Marvin Schwarz. Although in the book its not at a restaurant, it is in an office setting. I have read that Tarantino is also having this story turned into a play. The plot of the play would be centered around Rick's time in Italy. I have also read that Tarantino signed a two book deal. In addition to this Novel, he will be releasing a book for reviews, or critiquing films. That makes sense as there was plenty of that going on in this book. All the main characters had something to say about different films. Most likely Tarantino speaking for himself through his characters. Quentin clearly heard the criticism about Sharon's lack of a voice and adjusted for the better. If he heard the criticism about his portrayal of Bruce Lee, he apparently couldn't care less. Bruce is portrayed very poorly. There are plenty of references to all things Quentin. He references his other movies, people who have worked with him in the past, as well as his favorite characters and works. I had to laugh when one of the Manson girls called Cliff- "Mr. White." Quentin went into lots of detail about Lancer, and Jim Stacy. In one nod to himself, he even had a scene where a character based on his father runs into Stacy and asks him to sign an autograph for his son "Quentin."  There is lot's of nostalgia. The book itself looks like one of the old paperbacks you buy on a spindle while waiting on line at the convenience store. The last couple of pages are adds for old Elmore Leonard, and Western novels. There are probably so many things going on as well that are just above my head. Tarantino references so many people, songs, and shows from an era that was simply before my time. All for the low cost of eight bucks lol. Hell, How can you go wrong for that? It was an interesting read, and it only took a couple of afternoons at the pool to read it. One or two of the scenes are verbatim from the movie, but mostly it is Tarantino going into very serious detail about the films, music, and television shows he grew up with. It was not very fulfilling to me as far as the Manson stuff, and I walked away feeling disappointed about Cliff. I am not sure that personally I need to see a play. I was intrigued with the story of Rick. Cliff, and how they crossed paths with both Sharon and Charlie. I am not so sure how interested I am in the rest of it. It had a tendency, in parts, to get too preachy. You sort of walk away from this Novel with a feeling that you have just spent several hours listening to a lecture on the merits/shortcomings of certain work that is sometimes very obscure to an average person. He goes way into description of process and technique in some cases. It can work sometimes, like when describing Roman Polanski's way of filming frame by frame to develop suspense in Rosemary's Baby. It can also get tedious reading an entire Chapter about the History of Stacy and Lancer.

Overall, I think this Novel is a decent supplement to the story when Tarantino is not spending too many pages on the most technical and mundane details of certain processes and backstories. I recommend this book if you liked the movie. It is a quick read for the most-part, and very cheap. If you are really into Quentin Tarantino, you will probably like this more than I did. There are many obvious references to his personal interests, so I am sure there are plenty of not-so obvious ones as well for the die-hard fans. I respect Tarantino, but never got that into him either. I think Pulp Fiction, and Reservoir Dogs were great movies. I think he made two other really good ones, and I put Once Upon a Time in Hollywood somewhere after that in my personal rankings of Quentin's work with the rest of them. I didn't love the Once Upon a Time in Hollywood movie, and the character I liked most in the movie was ruined in the Novel. But, it was fun in parts and I am not sorry I spent the time reading it. Bottom line: