A Look At the Evidence: #2 Cutting the Wires (Who Told It Best?)

The official narrative of these crimes says when the murderers arrived at Cielo Drive the first thing that happened was that Watson climbed the power pole and cut the phone line. Atkins and Kasabian tell two versions of this tale. One is wrong. Which one? The answer is surprising.

The jury always determines the credibility of a witness. The judge ‘instructs’ the jury on the issue using the following instruction or one very similar in all cases.

You alone must judge the credibility or believability of the witnesses. In deciding whether testimony is true and accurate, use your common sense and experience. The testimony of each witness must be judged by the same standard. You must set aside any bias or prejudice you may have, including any based on the witness's gender, race, religion, or national origin [, or <insert any other impermissible bias as appropriate>].

You may believe all, part, or none of any witness's testimony. Consider the testimony of each witness and decide how much of it you believe.

How well could the witness see, hear, or otherwise perceive the things about which the witness testified?

How well was the witness able to remember and describe what happened?

What was the witness's behavior while testifying?

Did the witness understand the questions and answer them directly?

Was the witness's testimony influenced by a factor such as bias or prejudice, a personal relationship with someone involved in the case, or a personal interest in how the case is decided?

What was the witness's attitude about the case or about testifying?

Did the witness make a statement in the past that is consistent or inconsistent with his or her testimony?

How reasonable is the testimony when you consider all the other evidence in the case?

Did other evidence prove or disprove any fact about which the witness testified?

Did the witness admit to being untruthful?
What is the witness's character for truthfulness?

Has the witness been convicted of a felony?

Has the witness engaged in other conduct that reflects on his or her believability?

Was the witness promised immunity or leniency in exchange for his or her testimony?

Do not automatically reject testimony just because of inconsistencies or conflicts. Consider whether the differences are important or not. People sometimes honestly forget things or make mistakes about what they remember. Also, two people may witness the same event yet see or hear it differently.

If you decide that a witness deliberately lied about something significant in this case, you should consider not believing anything that witness says. Or, if you think the witness lied about some things, but told the truth about others, you may simply accept the part that you think is true and ignore the rest.

Using this instruction is it possible to reach a conclusion regarding which witness told the more accurate tale regarding the phone line.

Atkins says this is what happened [the emphasis is mine]:

Q: What did Tex do when he approached the power pole?
A: He climbed up it and cut two lines.
Q: The wires?
A: Two wires that led to the house, to this house.
Q: All right, what did Mr. -- or, what did Tex do after he cut the lines?
A: He climbed back down, told all of us to get into the car put the bolt cutters back in the car, and drove back down the hill and parked on a side street.

Atkins places the car between to power pole and the neighbors. She offers that the neighbor’s house is not shown on the diagram. Atkins sees Watson climb up the pole with the bolt cutters and cut two wires. She sees Watson put the bolt cutters back in the car. She sees all this because she and apparently everyone else were outside the car when this occurred. She testifies that Watson told ‘all of us’ to get into the car.

Now look at what Kasabian has to say.

Kasabian at TLB [My comments]:

Q. What is the next thing that happened?
A. He [Watson] got out of the car; he walked around the back of the car. I don't know if he had wire cutters or what, I don't know, but I remember he climbed the pole, and I saw wires fall. Then he came back and got in the car. [Why does she offer up the bit about wire cutters? No one mentioned this to her at this point in her testimony.]
Q. All right, now, when he climbed the pole, where was the car in relation to the pole?
A. Right beside it.
Q. And you were in the passenger side of the car?
A. Yes.
Q. Was the pole next to the passenger side of the car or the driver's side?
A. The passenger side.
Q. It was on your side of the car?
A. Yes.
Q. Did you actually see Tex climb the pole?
A. I think so. I am not positive. I just remember seeing the wires fall.
Q. Did you hear him cut any wires?
A. No.
Q. But you saw some wires fall?
A. Yeah.
Q. Do you know how many?
A. No.
Q. Was it many or one or two or three or what?
A. There were a few.
Q. You heard them fall to the ground?
A. Yeah.
Q. What is the next thing that happened?
A. He got back in the car and we drove down the hill and parked the car on the right side of the road.

And at the Watson trial:

Kasabian places the car right next to the pole. No one except Watson is outside the car. She does not know if Watson has wire cutters (but oddly mentions something- the wire cutters- she doesn’t know anything about, unsolicited) and does not see him cut the wires.

The image below is a good view of the gate at Cielo Drive. The gate is just behind and to the left of the power pole. It is not the dark ‘wall’ further up towards the garage. The pole is visible in the center of the image. The Knott house is the first house from left to right. 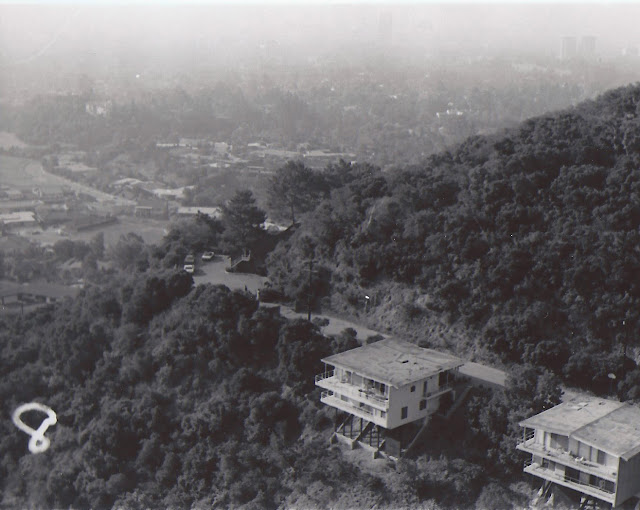 Notice the height of the pole compared to other objects. The phone line was 'at the top' of the pole. 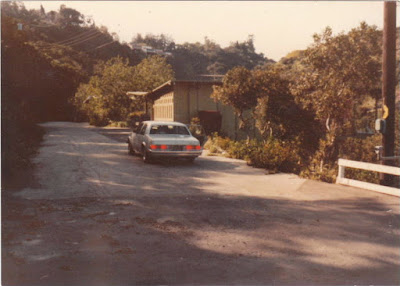 In the first image Atkins places the car to the right of the pole. That would place the car about where the car is located in the second image. The pole is there to the right.

Kasabian says the car was parked directly adjacent to the pole, which would place it next to the white fence in the second image.

If Kasabian is accurate neither she nor anyone in the car could have possibly seen Watson after he climbed the first four or five feet of the pole while sitting in the car. They would have no line of sight unless they stuck their heads out the window. At the same time if they parked adjacent to the pole and Kasabian was on the passenger side closest to the pole she could easily have seen him at least start to climb the pole. She could have reached out and touched him.

If Atkins is correct and the witnesses were outside the car Watson could easily have be seen perform the entire act.

Atkins and Kasabian cannot both be correct. One of them is mistaken, but which one? The physical evidence suggests that it is Ms. Kasabian, who is not accurate.

Did other evidence prove or disprove any fact about which the witness testified?

“The first theory is that the killers climbed a telephone pole (Addendum 1 and 1A) located just north of the above-described electronic button which opens the gate to the Cielo property. The phone wire at the top of this pole had been cut in such a manner that it stopped phone service to the Cielo property; however, did not allow the phone wire that runs from the pole to the house to fall to the ground. The killer(s) also cut a small piece of two-strand wire which runs from the Cielo home to the telephone pole near the top and then down to where the button for the gate is located.

Atkins saw Watson at least a dozen feet above the ground specifically cut two wires. Unless we assume someone told her about this the logical explanation is she actually witnessed Watson cutting two wires and her testimony is supported by the physical evidence.

She identifies the number of wires that were actually cut and the only way she could see this event (Watson well above the car) is if she were outside the car.

Atkins also says ‘all of us’ were told to get back in the car after Watson climbed back down the pole. While Bugliosi fails to follow up on exactly who ‘all of us’ were the reference logically is to all three women. That places Kasabian outside the car watching the event with the rest.

It is possible that Atkins was outside the car and Kasabian was inside the car but when the story takes this route assumptions are made that are not supported by the evidence making both witnesses inaccurate.

Based on the physical evidence Atkins’ testimony is simply more accurate then Kasabian’s.

If you decide that a witness deliberately lied about something significant in this case, you should consider not believing anything that witness says.

We are left to speculate why her testimony wouldn't simply agree with Atkins' version of events. What begins to happen, however, as the story unfolds is we find Kasabian distancing herself from culpability and passing it to others. She becomes an unarmed, vulnerable and passive observer running all over the place powerless to stop the actions of others. In this instance it is a fairly minor point in the scheme of things but at nearly every turn going forward she avoids 'active participation' in the crime and especially any elements of the crime that suggest premeditation- cutting the phone line suggests just that.

Bugliosi surely wanted to portray her as the most innocent of the lot. Nothing in her responses suggests she was 'coached'. Volunteering the her lack of knowledge of any bolt cutters doesn't fit a coached witness because Bugliosi doesn't want that answer. He wants the opposite answer. But it does, again add some distance between her and the crime.