Was it all in the stars?

Scanlan's was a short lived monthly magazine that leaned left of Left.  Only eight issues were ever published, between March 1970 and January 1971.  The magazine was investigated by the FBI and came under the ire of the Nixon administration.  It was essentially put out of business by the muckraking Right. The editors were Warren Hinkle III and Sidney E Zion.

The August 1970 cover was an R Crumb cartoon with a mention of Charlie Manson. Inside is "An Astrological Portrait of Charles Manson"  done by "Gavin" Chester Arthur.  Certainly astrology was apropos of the times and no surprise that someone should do Charlie's chart.  I found this particular assessment to be quite interesting, offering mystical insight to why Charlie was the way he was.

Just as interesting was the man who did the chart.  Gavin Chester Arthur, born Chester Alan Arthur III, 1901 in Colorado was the grandson of President Chester Arthur.   In the 1920's Gavin eschewed his college education at Columbia to go off and become involved in the Irish Republican Movement of the 1920's.  In the early 1930's Gavin migrated to California and founded a commune at the Oceano Dunes near San Luis Obispo.  In 1934 he joined the Utopian Society of America.

At the outbreak of WWII in 1941 Gavin signed up with the Navy.  After the war he moved to New York for a time but was back in California by 1949.  During the 1950's he held various jobs, a teacher at San Quentin, a merchant marine, gold prospector and he also completed his bachelors degree at San Francisco State College.  He was heavily involved in San Francisco's Beat movement. He had been married and divorced twice by this time but was also an unabashed bisexual.  He was a forerunner in the gay rights movement. 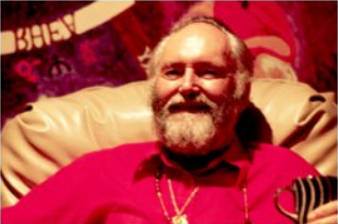 In the '50's he became interested in astrology becoming a professional astrologer in the early '60's. By 1966 he published "The Circle of Sex", a book having to do with sexual behavior categorized on a wheel like in astrology.   Gavin, with his astrology knowledge, was asked by the staff of the Oracle to select a date for San Francisco's Human Be-in.  That date turned out to be January 14 1967, a scant two months before Charlie was released from Terminal Island Federal Prison.

Here is his assessment of how the stars ruled Charlie.