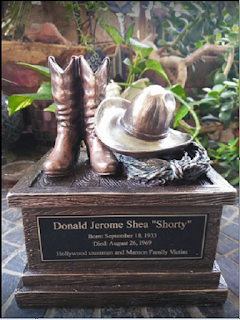 March 18, 1971 a lawsuit by Phyllis Shea on behalf of herself and daughter Karen Shea was filed in Los Angeles Superior Court.  The suit named Charles Manson, Bruce Davis, Steve Grogan, John Doe Grogan, Mary Doe Grogan and Doe’s 1 through 20, inclusive as the defendants.

The suit asks for 1.5 million to be awarded to the plaintiffs for the wrongful death of Donald Jerome “Shorty” Shea, husband of Phyllis and father to Karen.  Phyllis claims in the suit that Shorty was the sole support for her and her daughter and that she and her daughter are his sole surviving heirs.


John Doe Grogan and Mary Doe Grogan are Steve Grogan’s parents.  The plaintiff’s attorneys were not privy to Steve’s parents first names at the time the suit was filed, nor were the names ever produced during the time the suit was still “live.”  Steve was under the age of 21 when Shorty’s murder was committed therefore his parents could held financially responsible for his actions.  As an aside, Leslie Van Houten is commonly referred to as being the youngest member of the Family to be convicted of murder when, in fact, Steve Grogan was the youngest member of the Family to be charged and convicted of murder.  He had turned 18 years old about three weeks prior to Shorty’s death.  Leslie turned 20 two weeks after the LaBianca murders.

Phyllis Shea was living in Sonoma California at the time the suit was filed and she retained two Napa California attorneys to handle the lawsuit.  Both of those attorneys have since passed.  It’s quite possible that Phyllis was still married to Shorty at the time of his death.  There are no records of a divorce.  Shorty would have committed bigamy with his subsequent two marriages after Phyllis.   Shorty and Phyllis did not live together for very long after their marriage.  They were separated before daughter Karen was born.

It’s doubtful that Shorty contributed financially to Phyllis or Karen for any length of time after their break-up.  Shorty never had much money and always had trouble keeping up with his bills.  Added to that, Phyllis met another man and had four children with him between 1963 and 1969.  She later married this man in 1982 and according to her 2016 obituary they were together for 54 years.

The 76 pages of the lawsuit are not complete, you can tell that there are missing pages but they are all that I received from my request to the Archives and Records Center at the Los Angeles courthouse.  The suit was eventually dismissed in 1978 due to no parties in the suit making an appearance in court at their last scheduled court date.