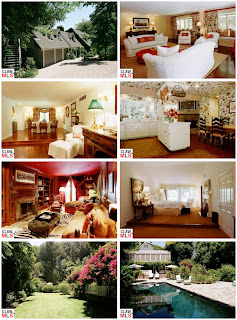 YOUR MAMAS NOTES: For some reason, Your Mama has increasing amounts of information on celebrity owned houses that are available for short and long term lease. For example, we have previously discussed homosexual boy band graduate Lance Bass' house of two swimming pools, we've discussed Faye Dunaway's West Hollywood hideout, and a hundred moons ago, we discussed the spectacular Runyon Canyon residence of Naomi Foner and Stephen Gyllenhaal (parents of famous sibs Maggie and Jake). Today we're going to be letting it fly about venerable comedian and original cast member of Saturday Night Live Dan Aykroyd and actress wifey Donna Dixon's allegedly haunted house high in the Hills of Hollywood.

The secluded "English Country" style residence has a long history of celebrity owners including Beatles drummer Ringo Starr. The property was also called home by one of the most famous mamas that ever was, the corpulent and hugely talented Cass Elliot from the legendary folk rock group The Mamas and the Papas.

Listing information for the 4,828 square foot house indicates there are 5 bedrooms and 5.5 bathrooms (property records show 6 bedrooms and 7 bathrooms), and is available on short term lease for $30,000 per month, fully furnished. Listing information shows the couple is willing to negotiate the price on a long term rental. Interestingly, no one seems to want to lease this house. Listing information Your Mama received from a very smart and talented realtor in the valley we'll call Big Bird shows the property has been on the rental market for more than 450 days, which is a very long time.

Oh hunnies, with all due respect to the Aykroyd/Dixon household, Your Mama could not be paid $30,000 a month to live up in this house. And it's not because of that awful kitchen where that horrid and eyeball assaulting floral wallpaper has been stuck to every flat surface in the room including the damn ceiling. Oh, no. The reason Your Mama would not be found sleeping up in this house is because the house is reported to be haunted.

Of course, Your Mama has no personal experience of the house being haunted, but Mister Aykroyd, a man with a huge and well known fascination of all things paranormal, claims himself that the house is inhabited by apparitions, stating that a poltergeist has gotten into bed with him (what!?!), turned on the Stairmaster, and moved jewelry across the dresser. He also said, "I'm sure it's Mama Cass because you get the feeling it's a big ghost."

Children, back in our university days, Your Mama lived in a haunted house, and let us tell you, there was no peace to be found in that house. That damn ghost would rattle things, hide things and STEAL things. Yes, we said steal things. I'm telling you the honest truth here babies. Your Mama came home from Latin class one day to find all the drinking cups in the house gone. GONE. Another day we returned home to find all the flatware had vanished. After having a crazy fat lady come over and do a séance in the middle of the night during which the entire second floor of the house heated up to more 90 degrees and the walls began to sweat, Your Mama packed up and moved our belongings out of that scary house right quick.

Anyhoo, despite our passionate love of white sofas, Your Mama finds most of the interior photos of this house to be done up in a boring Pottery Barn 101 style that has collided with a frumpy British woman. Except for that amazing library, which looks like something marvelous and decadent out of a mad Count's castle in Bavaria, or maybe the library in a massive 16-room Park Avenue palace inhabited by an educated and bohemian heiress and her well-traveled and well-read male companion.

The flat and grassy backyard area certainly provides enough space to run the dogs and exercise the children until they drop from exhaustion, and the natural stone pool deck appears to be sufficiently sunny. Your Mama is certainly not keen on that massive chunk of lattice work we see on the end of the house, but we do imagine it's a sun dappled and cool spot to suck down gin and tonics while the children frolic in the pool with their various nannies and security personnel.

Property records reveal that in addition to this Hollywood Hills house, The Canadian born Mister Aykroyd, a co-founder of the House of Blues empire, appears to maintain another Los Angeles residence on Selma Avenue, which records indicate he owns in partnership with his brother Peter, an actor and psychic researcher, whatever that is. We also located residences for Mister Aykroyd in on East 89th Street in New York City, as well as a property on Martha's Vineyard, a favorite East Coast hangout for the rich, famous and discreet. Some reports say that Mister Aykroyd also maintains a summer home in Kingston, Ontario, Canada, around Loughborough Lake.

A March 2002 report in Forbes stated that the couple had put their Hollywood Hills house on the market for $2,500,000. However, property records reveal that the famous couple continue to own the property.

Your Mama wishes the couple all the luck in the world getting this house leased out to someone very rich who does not mind having a phantom crawl into bed with them at night. Certainly in the the strange and eccentric sprawl of Los Angeles, there has to be at least a couple of people curious to know what it's like to live with the ghost of Mama Cass, right?