This investigation hurt my heart. The high school photos of the girl Manson raped reveal a pretty teen who looks shy and nervous in front of the camera. I won't blast her face across our blog but have no fear if the photos interest you. Some JV'er will have them up somewhere else online after reading this post and asking their friends with bank accounts to check Ancestry for them.

*Btw, while we're on photos. Don't let anyone ever tell you we found the wrong person when we're sure otherwise. Especially self-appointed movers and shakers in the Manson business who fail to notice themselves turning into yet another Gollem in a long line of Gollems. They're callously wasting your precious time in an attempt to remain in the spotlight and keep their patrons patroning.

No one sits enthroned above us. The Several Searching Scholars of the Simi Valley do not miss.

**Except when we miss. Which happens more often than my boasts indicate but hey confidence is important. Moreover, a pair and a spare is always our general plan since moments of high caffeination and near overdose levels of frosted petit fours sometimes allow doubt to creepy crawl its way into our brains. We always have options.

***Also what's up with the other teams looking up the same stuff we look up these days? I thought we're all clueless and stupid here? Why ride our train when yours is so big and strong?

Let's get back to Mr. Summers. Some readers don't like when I type what I want while working for free. Matt watermarked these docs for the obvious reasons. I (of course) got them from Secret Agent Deb. 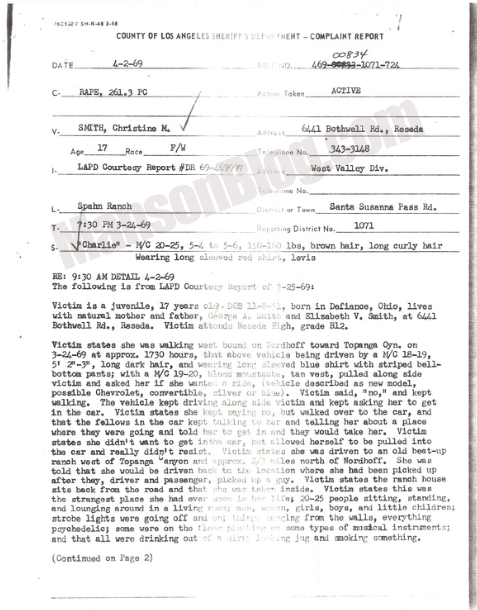 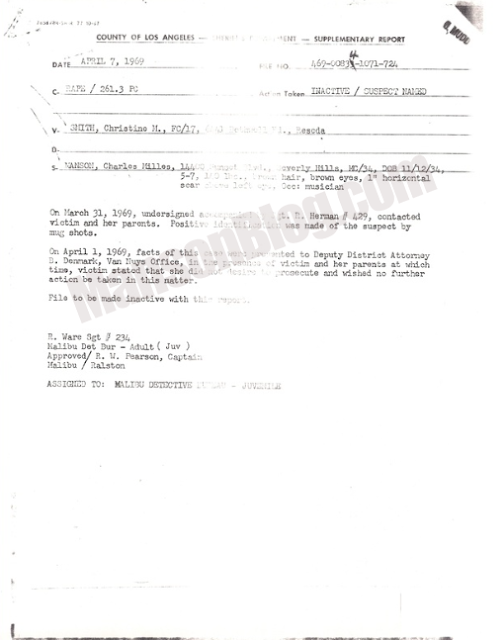 Lately, we find ourselves working our way backward through 1969 starting at the murders. In addition to this rape arrest, Manson also has an assault charge on the same day. I'm wondering if someone might share a bit of insight there? Did the assault charge come with the rape or was Charlie running wild that day?
Not many readers care, I do, but Manson was a diagnosed schizophrenic. You can say he fooled the doctors all you want but miss me with that grift unless you can produce your degrees. I believe in science, doctors, and formal education way more than Internet pickpockets.
What about a sex addiction for Charlie on top of the violent schizophrenia? How many ways existed to make himself feel good, hell, even feel anything, all those years he was locked in a cell? Masturbation had to be clear winner.
Let's not forget Charlie's rape of a younger boy at knifepoint while incarcerated as a teen. I know he explained it all away several times in various places, the knife was a prop in case they got caught yada, but what else would someone caught raping someone with a knife in there say?
To me, it seems like you can hate Manson until the moment you die but at the end of the day all you're doing is despising a mentally ill person who did mentally ill person things. There's just no way around it. Manson was more of a symptom of our society than an iconoclast.
Collectively, we failed Charlie. The victims paid with their lives. Thank God we started caring about one another afterward, saved all of the other abandoned children everywhere, and fixed our uncaring world so the revenge of the broken would never again occur.
I'm so happy I feel safe every day now in the land of the free.
One more question before I duck back into oblivion with my homies. Do you think there's a way to figure out which boys lured the high school rape victim back to the ranch? I'd like to share their names and cavity-filled grins with the Internet so their children and grandchildren can view them on Google one day.
+ggw ohio.