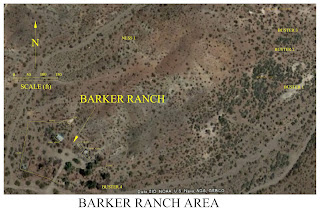 There are some very good comments on the Barker Ranch posting.

To answer one question, Film Crews are required to purchase a permit to film in a National Park. Of course when they applied for a permit to film at the Barker Ranch, the alarms went off and they sent two babysitters. I don't know if this would be the case if they were filming the wild flower bloom in April of doing a special on the lizards of Death Valley!

I would also like to mention that the film crew was very professional and the Director, Doug was very well prepared with some very good questions.

For those who are wondering, I did not accept payment or expenses for telling this story. I travel there on my own time at my own expense just like I did for the Eviliz Tour. All we are asking is that the Park Service and the Sheriff leave their egos by the door and bring these kids home that were at the wrong place at the wrong time in 1968 and 1969. This is a value that we hold to as Americans wether it is a murder victim here in the US or a service member who gave their life for their country overseas. It is simply the right thing to do. The only thing worse than having a loved one murdered is having a loved one go missing and not knowing what happened to them.

The science in this case is indisputable. The Gas Chromatograph / Mass Spectrometer analysis of soil samples on the sites at the Barker Ranch, match those of human burial sites around the world that we have collected.

I have attached a Google Earth GIS overlay of the sites as well as the exact GPS coordinates. All this data is accurate to within 18 to 24 inches. Feel free to post this data in case anyone would like to visit the area and stand on the exact spots.

I would [also] like to respond to Bobot420's very well researched comment. Those are indeed the rules. However, the NPS, specifically the Superintendent, can permit anything she wants, to a movie company as long as it does not create too much disturbance to the environment. If the film company was filming a remake of "Lassie" and little Timmy was lost in the sand dunes, and they wanted to film Lassie running on top of the sand dunes looking for Timmy, that would be permitted with no problem as it would show the beauty of the park. The four paws of Lassie would cause no more disturbance to the sand dunes than the 175 - 200 pound adult actors acting as searchers in the movie.

The same would apply to filming Buster alert on the sites at the Barker Ranch. He would simply sniff and passively lay down on top of the sites. When History Channel called the park for the filming permit, they were told from the outset that they would not allow Buster to work the sites before they even asked! He would be held to the letter of the law and in fact limited to established roads only as part of the permit.

I did interview a retired mid level manager from NPS Death Valley who worked for Superintendent Sarah Craighead. It is their opinion that Sarah does not want the public to know that bad things can happen in her National Park. The victims, and the families who are missing them, do not enter into Superintendent Craighead's decision making process. It is heartless but this is how she thinks. It is all about her and moving up the promotional ladder by not having any drama in her National Park.

In other words, there is nothing to see here, remain calm, all is well, move along now.

I know that this seems almost unbelievable that a high ranking Park Service Supervisor could mis-represent the truth like this, but it appears to be a practice that is condoned at the highest levels of the Park Service as evidenced by this:

As you can see, no matter what the facts and the science are, they will simply mis-represent the facts or make up their own facts. No one in the Drakes Bay case was fired.