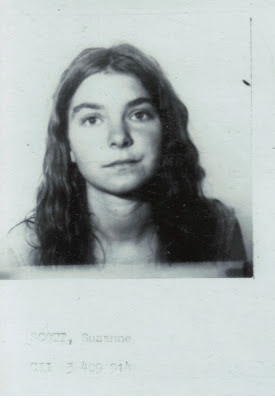 Thanks to Ole J.C. for this mugshot of Suzanne Scott. 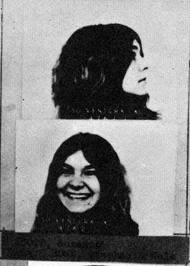 The Stockton Murders - timeline of what took place 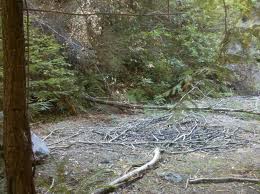 (Warning: Pure guessing follows:  A bail bond had been issued by a private company for an amount which would pay for half a house in 1972.  They have a financial interest in securing this risk from presumably James T. Willett of Bardstown, KY who is a member of a family, which owns Kentucky Bourbon Distillers.  They likely checked with the DMV for a vehicle to use as an asset and may have verified with James’ family his identity and past residences.  They would be the most tuned to recapture ‘James’ should he jump bail as was to be the case.  Using James Willett’s ID, Address: 704 ¼ Coronado St, Los Angeles, CA, may have been the first domino to fall in this case which led police to the car parked in front of 720 W Flora Ave.)

8 Nov - The body of James Willett is discovered near Guerneville CA.  Willett’s body was initially reported as an unidentified man aged 20 to 40.  Also discovered in the county were three bodies linked to Hell’s Angel member, George ‘Baby Huey’ Wethern (Although ultimately not associated with the Hell’s Angels case, Willett’s body appears to have been a point of confusion for more than a day or two).

8/9 Nov - Lauren Willett is shot and killed (How could the Flora Ave gang have learned about the discovery of James’ body?).

10 Nov - According to Paul Fitzgerald (Krenwinkel defense attorney), Squeaky phoned him and said she had arrived in Stockton via bus, late Friday (10 Nov) then spent the night in the Flora Ave house before visiting Goucher in jail on Saturday (11 Nov).  Somehow Squeaky managed to locate Pitman at the W Flora Ave home, in spite of the fact that Pitman had lived there less than two weeks.

11 Nov (8 PM) - Police respond to a report that Willett’s car was seen parked in front of 720 W Flora Ave.  Entry is forced after a female occupant slams the door on a police officer.

(Is it mere coincidence that a co-defendant of Monfort (Goucher) is being visited in jail by Squeaky Fromme who had to sign into the jail, presumably with an address?  Did she unwittingly write 720 Flora?  Write a phone number which was searched in a reverse listing?)

Inside the Flora Ave house is an infant (7-8 months old) identified by Nancy Pitman (using alias of Lauren Olmstead) to be Heidi Willett, adding the mother having just left for Kentucky to be with the father, Jim Willett (Would Pitman admit this association knowing that James Willett’s body was discovered?).

Fromme calls the Flora Ave house after visiting with Goucher in jail looking for a ride.  Police oblige and return Fromme to the same facility she was visiting.

(Monfort and Craig were escapees/parole violators from prison as well, making the testimony of James Willett about various robberies appear superfluous compared to simply being turned into police with an anonymous call.  Would James have been murdered to keep him from talking about other robberies?)